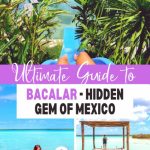 Bacalar in Mexico is somewhere you need to see to believe. Seriously, it’s an otherworldly place that would look right at home on an alien planet in a sci-fi movie. We’re talking waters so blue they merge seamlessly with the skies, shores of milky white aqua, and cobalt H2O that glints under the Mexican sun.

They call Bacalar the Lagoon of 7 Colours. That’s because it rolls out in a gradient of several blues, from perfect turquoise close the shallow shores to dark, shadowy blue at its heart. Around the water are soft hills and forested flatlands, wild cenotes and the mangrove-fringed coastline of the Mexican Caribbean.

But, the stunning setting is just half the story. Bacalar in Mexico has risen to become one of North America’s upcoming adventure hubs. Everything from whitewater rafting to whizzing ziplines awaits in the area for those who like to get the heart a-thumping.

This travel guide to Bacalar runs through all the ins and outs of the things to do in Bacalar. It explains what seasons are best for visiting this gem on the Belize-Mex border, how you can get to the shimmering lagoon in the first place, and what you simply must have on the itinerary when you do arrive.

Where Exactly is Bacalar?

Bacalar is actually the name of a small village in the south of Quintana Roo state. People also use the name to refer to the whole body of water that extends to the north and south of the main town, which is actually a colossal underground river that floods to the surface via cenotes and springs.

You’ll find all that a mere 11 miles to the north-east of the Belize border. The Mexican port town of Chetumal is around 12 miles away on the coast of the Caribbean Sea. Meanwhile, the closest major cities are in Mérida and Cancun, up in the popular tourist hotspot of the Yucatan.

When to Visit Bacalar in Mexico

Aim for the dry season. It runs from December to early April in this corner of Mexico and sees at least 50% less rain than other periods. Things are generally a little cooler at this time of year, too.

You’re looking at temperatures that hover around the low to mid-80s in the daytime. On top of that, you get cloudless skies much of the time from February onwards, which is just about perfect for topping up the tan.

The shoulder season comes with June and July. Prices will be much easier on the wallet then, but you might have some big downpours mid-day to contend with.

I’d definitely say to steer well clear of late summer and early fall. It’s storm season in Quintana Roo and the Yucatan, and the cyclones can get pretty strong and disruptive to travel.

How to Get to Bacalar

Bacalar isn’t the most accessible corner of Mexico. However, it’s also not too hard to get to. Thankfully, the mainstay attractions of the Yucatan are within a day’s traveling, so you should find it relatively easy to arrive in the general vicinity of the lagoon. Some transport options are:

Where to Stay in Bacalar

Bacalar village is a charming glimpse at old Mexican life and a great place to unravel the rich history of Quintana Roo. There are plenty of various places to stay in the area depending on preferences and budget.

Top 10 Things to Do in Bacalar

Ready to really dive into Bacalar in Mexico? Of course you are! This part of the guide is the bit you’ve been waiting for.

It hops from the gleaming blue waters of the Bacalar Lagoon to the enchanting heart of Bacalar village and then delves into the surrounding jungles and cenotes, offering all sorts of adventures in this enthralling corner of Quintana Roo…

One of the greatest joys of Bacalar in Mexico is the swimming. There are endless opportunities to get wet in some of the clearest waters on this side of the Maldives. Some of the best access to the aqua is found at Balneario Municipal El Aserradero. There, rickety timber piers poke over the water. There’s room to lay your towel and several spots for diving right in.

The campground at Yaxche in Balacar town, meanwhile, has its own over-water hammocks and swings, not to mention accommodation right by the banks that promises not to break the bank. Swimmers also won’t want to miss the so-called Pirates Channel (more on that later, though!).

Ask any locals for a list of the most intriguing spots around the Balacar Lagoon and it’s likely that Canal de los Piratas will come close to the top. It’s essentially a small waterway cut between the main lake and the Laguna Mariscal to the east.

Once upon a time, it’s thought to have been a major trading channel within the Mayan Empire. Later, Welsh pirate Henry Morgan sailed his ships up it for repairs.

These days, the swashbucklers have all but gone. Instead, tourists come to wade through the waist-high waters with a couple of cold cervezas at hand. The mud here is also considered to be packed with rejuvenating minerals, so be sure to get your spa fix before paddling off.

It’s just over an hour from Bacalar to the coastal town of Mahahual, which is great news if you want to trade the fresh waters of the lagoon for the salt spray of the Caribbean Sea.

It’s perfect if you want to chillax for a little, but also a fantastic jump-off point for scuba and snorkelling in the Mesoamerican Barrier Reef. Mahahual sports a whole range of pretty luxurious hotels to boot.

Some of those even offer fantastic suites that open onto balconies with front-row views of the Caribbean. Hello, honeymoon stay!

The first cenote (but most certainly not the last) on this list comes in the form of the amazing Cenote Azul. It’s arguably the most iconic in the whole vicinity of Bacalar. As its name implies, it glows a dark, brooding blue color from a little clearing in the forest.

With a depth of up to 90 meters, it’s among the deepest on the entire Riviera Maya. Outings here can be about kayaking across the surface or simply settling in for a veggie lunch at one of the local eco lodges. Both are cool ways to experience the site.

Prepare to be amazed at the Cenote Negro. Totally surrounded by the light turquoise of the Bacalar Lagoon, it’s actually inside the lake itself.

The only real way to tell there’s even a cenote there is to look for the color change, which is stark, going straight from a milky grey to a deep black in a matter of seconds. Swimming is dangerous, but boat outings across the top of Cenote Negro are possible.

One of the main hubs for watersports in the Bacalar region is Cenote Esmeralda. Like Cenote Negro, it’s actually hidden just under the surface of the lake, so it’s only the darker water that comes with the extra depth that reveals it even exists.

Swimming in the cenote itself is prohibited – in fact, it’s positively dangerous. However, the surrounding area is filled with shallow spots that are perfect for snorkelling and free diving, while there’s an abundance of kayak rentals and boat outfitters to boot.

The small town of Bacalar is much more than just the transport hub of the region and the gateway to the lake of the same name. It was recently designated as one of Mexico’s famous Magic Towns for its unique character and charm.

Hit the main Zocalo square and you’ll find a lively Latin plaza where locals chatter beneath the plane trees and bands strike up in the early evening.

Nearby alleys and calle streets offer oodles of craft shopping – think everything from dreamcatchers to leather-bound books to traditional wood carvings. It’s also a great place to grab a bite to eat, what with pizza joints and taquerias bursting from all the corners.

The Fortress of San Felipe shoulders its way high above Bacalar town. It’s the most striking landmark in the region and has a history that goes back all the way to the early 1700s. That’s when the citadel was first raised, to deter pirate raids from across the water.

Today, you can delve in to learn all about the buccaneers that once warred along this coastline, and lots about the Mayan peoples and the development of modern Mexico.

More than anything, the Fortress of San Felipe has stunning views. Head to the bulwarks in the evening and you’ll be treated to 180-degree panoramas that take in the turquoise tones of the shore and the lush greens of the Quintana Roo jungles in the distance. Don’t forget the camera!

Adrenaline junkies might like to take a few hours off from the soothing shores of Bacalar Lagoon to hit the whizzing ziplines of the Kan K’in park. They’re all about high-speed jaunts through the green jungle canopies to the north of the main town.

There are several different zips to challenge you, with some offering eye-watering views of the great lake waters in the distance. A few hiking paths also weave through the forests below if you prefer not to get the vertigo a-going.

Migratory bird species flock to this small clutch of rocks in the midst of the lake’s perfect blue waters on their way north or south. Some come from as far afield as Miami and central Florida to nest, while others are native to south Mexico.

Be sure to keep your eyes peeled for the likes of multicolored parrots and prowling birds of prey, along with parakeets and green jays.

The budding photographers in your travel group might want to head out to Bird Island early on. When the sun rises over the big Bacalar Lagoon, the waters glow a resplendent shade of bright azure and the fringing of mangroves looks simply spectacular.

There are loads of things to do in Bacalar, Mexico. An upcoming hub for ecotourism and adventure tourism, the spot has hardly any of the same booming crowds as Playa del Carmen and Cancun.

It’s your chance to escape the city and the beaches of the Yucatan for something a little more off-beat and immersed in nature, all right on the Belize border.

Wow, I noticed a LOT of stuff in the Yucatan. It's definitely packed with places that are crowded and touristy, but you can also find laid-back spots like Bacalar. One of my favourites is Xcalak, near Bacalar. It's on the coast, and it takes awhile to get there, but it's soooo worth it if you want to get away from crowds. :D

As we will travel to Yucatan next week, your post is pure gold to us! Thanks! :) May I ask where in Bacalar those wonderful swings are?

Of course! It's at Los Aluxes Hotel & Restaurant :-)