In the minds of most people, Mexico is usually seen as a beach resort destination or a corrupt narco-state run by drug lords. However, the majority of people don’t know the facts about Mexico, its culture, and its people.

Their opinion is based on stereotypes and bad press. As a result, they’re scared to go to Mexico, but not many people actually know what is Mexico known for.

Here are 25 interesting things about Mexico – a country that I definitely recommend to both visit and live in.

Disclosure: I wasn’t just a tourist in Mexico – I’ve lived in different parts of Mexico for over 6 years (->you can find out what was I doing in About Me). I also published a book on Mexican public policies that you can get here. My opinions might be subjective because obviously, I haven’t managed to visit or live in every single place in Mexico, so bear in mind that maybe things are different in parts of Mexico where I haven’t been. The post is meant to show people that Mexico is worth visiting and different than often portrayed by the media and movies.

1. Mexico’s Real Name is Not Mexico

Mexico’s real name is the United States of Mexico (Estados Unidos Mexicanos). The country is divided into 31 states, plus the Federal District.

Each state has its own laws, regulations, and police, similar to the United States of America. When in a different state from the one you live in, your phone is practically always roaming.

2. The Capital of Mexico Wasn’t Mexico City Until 2016

The majority of people have always thought that the capital of Mexico is Mexico City. The actual capital was Distrito Federal (DF) – the Federal District, In 2016, the city officially changed its name for CDMX (Ciudad de Mexico).

It can be confusing because the Mexico City metropolitan area lies within DF and parts of the State of Mexico. However, only the inhabitants of DF can say they live in the capital. 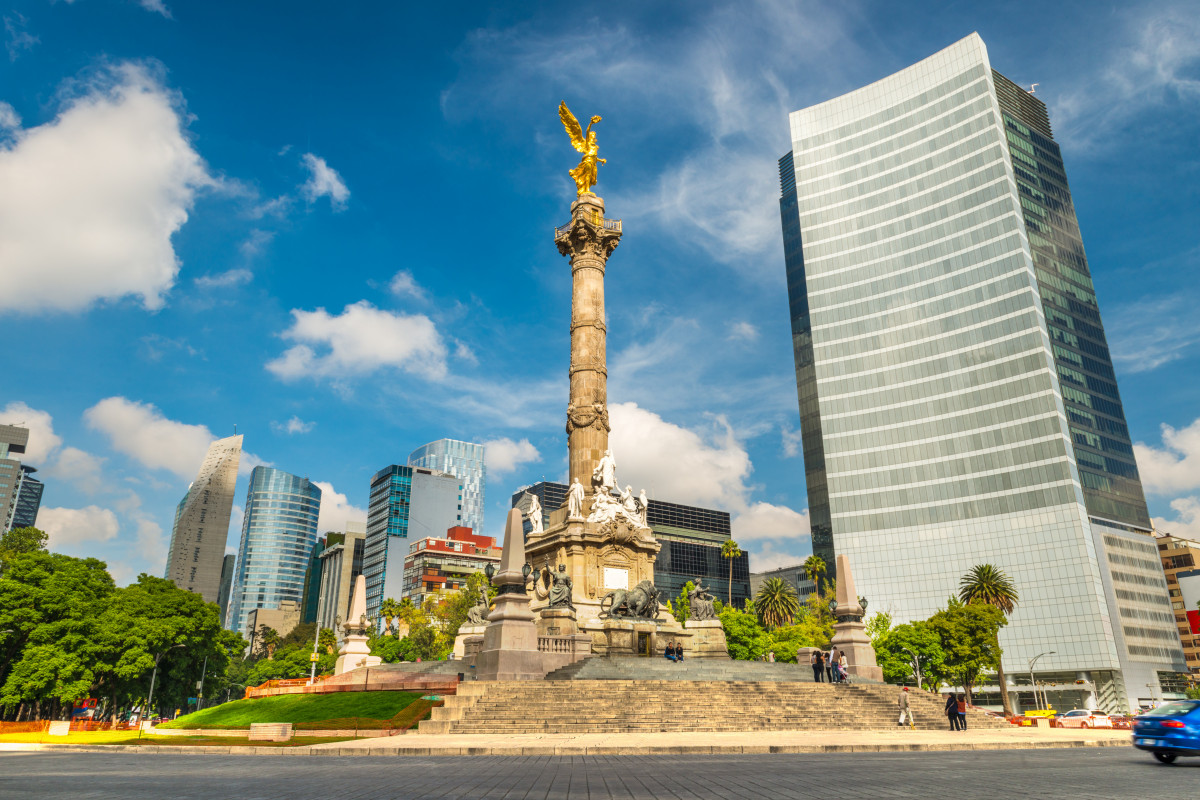 3. Mexican Burritos Are Only Eaten in the North

Everyone seems to love Mexican food, so much so that it was recently classified as an irreplaceable part of the cultural heritage of humanity by UNESCO. Although, outside of Mexico what people refer to as “Mexican food” is more often than not actually Tex-Mex.

For example, in Mexico, nobody actually eats burritos Chipotle-style or filled with rice (I know that in northern Mexico burritos are popular, however, I meant burritos from US fast-food chains).

Not only that, most authentic Mexican food is not very spicy or hot – it’s actually sour due to a number of limes (in Spanish simply called lemons).

As mentioned in my previous article on Mexican slang, Mexican Spanish is unique. For example, in Mexico torta doesn’t mean cake, it means sandwich.

Also, sope is not soup, but a so-called ‘Mexican pizza’ (of course it’s not an actual pizza, but it is similar to the concept of a pizza – dough, sauce, and toppings).

5. US citizens Are The Largest Immigration Group in Mexico

It’s no secret that Mexican citizens make up the largest proportion of the United States’ foreign-born population. But the US citizens, on the other hand, constitute the largest immigrant group in Mexico. According to the 2010 Census, over 750,000 US citizens live in Mexico.

Mexico’s got 34 UNESCO sites within its borders. The list includes the historic centers of towns like Guanajuato, Mexico City and Puebla, as well as with dozens of ancient ruins, the agave fields of Tequila, and much more.

7. You Shouldn’t Throw Toilet Paper in the Toilet

Mexico isn’t different than other places in Central America in this sense, especially considering the fact that it’s not in Central but North America. You should throw toilet paper in a bin, not in a toilet bowl. Not surprisingly, many Latin Americans abroad have trouble adjusting to flushing toilet paper down the toilet.

Correct me if I’m wrong, but none of the hostels I’ve stayed in around Mexico allowed me to flush down toilet paper. Especially in Riviera Maya which is so close to the ocean.

8. Mexico Has Women-Only Carriages in Metro and Buses

Despite the stereotype that Mexican women are constantly abused, women in Mexico are actually quite privileged. In Mexico City there are women-only buses and special sections for women on the subway.

Maybe for some people, this doesn’t seem like much of a privilege, but let me give you the example of Turkey where women in public transport are constantly being abused and nobody is trying to protect them in any way.

The Turkish government hasn’t even considered creating a special women-only section. Also, Mexican men are very caballerosos, meaning that they always open the door for women, pick them up before the date/meeting, and usually pay for everything.

Ironically, according to a research conducted in Mexico City in 2013, it turns out that many women actually prefer to use the general section of the subway instead of the women-only one because men kindly give them a seat while other women don’t.

9. First Printing Press in North America is in Mexico City

The first printing press in North America was used in Mexico City in 1539 at the House of the First Printing Press in the Americas (Casa de la Primera Imprenta de América). Long before it was used in the United States.

Don’t worry, kids do receive gifts, and they might even get them twice. The bigger celebration, however, is on the day of Three Kings on January 6th.

Mexico declared independence on September 27th 1821, but the beginning of the independence war was Sept 16th 1810 – the day that’s celebrated as independence day.

Cinco de Mayo is not the Mexican Independence Day, it only commemorates the Battle of Puebla in 1862 when Mexico won against the French army. It’s pretty much only celebrated in Puebla and by Mexican immigrants in the United States.

12. Mexico Has the Oldest University in North America

People usually think that since Mexico is a part of Latin America it’s located in either South or Central America. But Mexico is actually a part of North America, along with the USA, Canada, and the Caribbean islands.

Therefore, Mexico has the oldest university in North America. The National University of Mexico (UNAM) was founded in 1551 by Charles V of Spain, 85 years before Harvard.

13. Mexico City is Sinking Every Year

Mexico City has the highest elevation and is the oldest city in North America. But not only that. it’s also built over the ruins of a great Aztec city Tenochtitlán on a lake.

However, unlike the Aztecs who created intricate systems of dikes and canals for flood control, the Spanish insisted on draining the lakebed once they got a taste of the work needed to maintain their watery existence.

As a result, Mexico City is sinking at a rate of 6 to 8 inches a year as pumps draw water out for the city’s growing population.

Mexico is in the middle of the “Ring of Fire”, also called the circum-Pacific Belt. It’s where almost 90% of the world’s earthquakes and about 81 % of the planet’s volcanic eruptions take place.

It’s the only place in the world where a rare rabbit called the volcano rabbit which lives near volcanos.

Mexico is also home to the world’s smallest volcano – Cuexcomate. This volcano sits just outside the city of Puebla and stands a cute 43 feet tall, barely a small hill.

15. Mexican Phone Numbers Can Be Weird

For instance, let’s say my cell-phone number in Mexico was 55 59 89 51 56. Now, if you’re calling or texting from another cell phone you dial this exact number. If you call from a local phone you need to add (0-44) before the number.

16. There Are Jaguars in Mexico

The largest wildcat in North America is the jaguar, which can be found in Mexico’s southern jungles. They can also be seen hopping around Mayan ruins. Careful out there when you’re wandering around cenotes!

He performed the first synthesis of norethisterone, which would go on to make up the main component of the first birth control pills in 1951.

The largest pyramid in the world is the Great Pyramid of Cholula in Mexico. It is also the largest monument ever constructed in the world, not the pyramids of Giza.

Although the Cold War ended 25 years ago, the term “third world” became synonymous with poverty in colloquial speech while the other two terms disappeared.

If one were to rank countries by GDP per capita, Mexico lies somewhere between Turkey and Brazil. Like any developed state, it offers plenty of modern hotels, houses, and exclusive restaurants.

On the other hand, the gap between poor and rich is quite big – while some households have a maid and a driver, most others don’t even have enough to live on.

20. You Can’t Shave and Drive in Mexico

In 2008 the Mexican city of Torreon imposed fines for putting on make-up or shaving with an electric razor while driving. Clearly, there were too many accidents on the road.

21. Color TV Was Invented in Mexico

Without Mexico, the world would be a lot more black and white for a long time. Guillermo González Camarena was an inventor who created the chromoscopic adapter for television equipment, which was an early color tv transmission system.

The fun fact is that he was only 17 and did it during WWII! His first official color transmission was from Mexico City in 1946.

22. Yucatan Was Supposedly Named After a Confusion

The name of the Peninsula resulted from confusion between the Mayans and Spanish conquistadors. According to a local legend, one of the explorers asked a local about the name of the peninsula. He replied: Ma’anaatik ka t’ann, which means ‘I don’t understand you’.

When it comes to the meaning of words that describe corn Mexico is like the North Pole and the words for snow.

However the corn, in general, is called maiz, but there are various words for corn in different forms. It’s not surprising as Mexican corn comes in 59 varieties.

Mexicans have cultivated this important crop for centuries and despite threats from international trade agreements and genetically modified imports, farmers continue the tradition of growing corn, collecting seeds and preserving varieties for the next generations to come.

24. Caesar Salad Was Invented in Mexico

Legend has it that Italian-American restaurateur Caesar Cardini invented the salad in 1924 in Tijuana, Mexico. According to The Telegraph, Cardini owned a restaurant in the tourist destination to “attract Americans frustrated by Prohibition.

Mexico is the 15th largest economy in the world and the 11th largest in terms of purchasing power parity according to the IMF. Some of Volkswagen’s best-selling cars are partly produced in Mexico, and the country has become a new hotspot for research and development.