Boracay – The Worst Tourist Trap in the Philippines

One of the most visited destinations in the Philippines, Boracay is famous for its beautiful beaches and great parties. The beaches are often compared to paradise lost because of their white sand that’s incredibly soft and nice. Well, at least this is what you can read in a tourist guide of the Philippines. I was quite hesitant to go there as I’m not much for partying, but I enjoy the beach a lot and I felt like Boracay would be quite a social place to be.

Unfortunately, Boracay turned out to be no more than a tourist trap and probably one of the worst places I’ve ever been to in South-East Asia. You may hate me for saying this and trust me, I was incredibly disappointed when I left the island, so before you crucify me, read my thoughts to understand why I hated Boracay.

Again, I might be totally subjective, so read the comments (both supporting and disregarding my opinion) under this article to make up your own mind. But remember how do you feel about 2.1 million tourists – that’s more than 40,000 on an average week, all cramped on a tiny island?

(UPDATE 2019) After 3 years it seems like someone finally agreed with my opinion and decided to close the island to tourists for 6 months. Boracay now has to contend with environ­mental degradation, traffic congestion, insufficient solid waste management, illegal construction, property disputes, illegal fishing. Not to mention that the most popular search term is ‘Boracay cheap prostitutes’ and ‘cheap sex in Boracay’. Multiple people reported food poisoning (myself included), so something clearly isn’t right…

Disclaimer: If you’re curious which other beach islands I can compare Boracay to here they are: Fiji, Cook Islands, Aruba, Jamaica, Sri Lanka, Bali, Galapagos, Maldives, Crete – Greece, San Andres – Colombia, Zanzibar and many others.

The Nightmare of Getting to Boracay Island in my Experience

Boracay is a tiny island, so when I arrived at Kalibo Airport, which is located further away than Caticlan Airport. I was aware of the fact that I had to take a bus for 2 hours and then take a ferry to the island. Following the advice of a friend, I ended up taking a Southwest service that organized everything. So far so good, right? Wrong.

To start with, I was on a bus with a group of teenage Filipinos that decided not to respect anyone else by playing their music incredibly loudly while screaming to it and throwing chips on others. When we finally reached the port, some local guys tried to carry my suitcases.

When I politely declined, they still asked for money and wouldn’t leave me alone unless I gave them something. I have nothing against tipping, but yelling “Give me a tip now!” isn’t going to make anyone give them more money, actually quite the opposite.

Why you can avoid this by going to Caticlan Airport, there’s also a ferry terminal…

The ferry terminal is like an airport where they x-ray your luggage and make you wait patiently to board your boat. Scratch ‘patiently’. I was trying to be polite while waiting for my luggage to be scanned when I was hit and pushed a couple of times by locals who absolutely didn’t care that I was standing there.

When we finally got to the island, nobody cared that Southwest left us all, around 40 people, in the pouring rain while they screamed out hotel numbers for at least 15 minutes before putting us in minibusses where we felt like sardines in a can. Suffice to say, it wasn’t a pleasant experience. 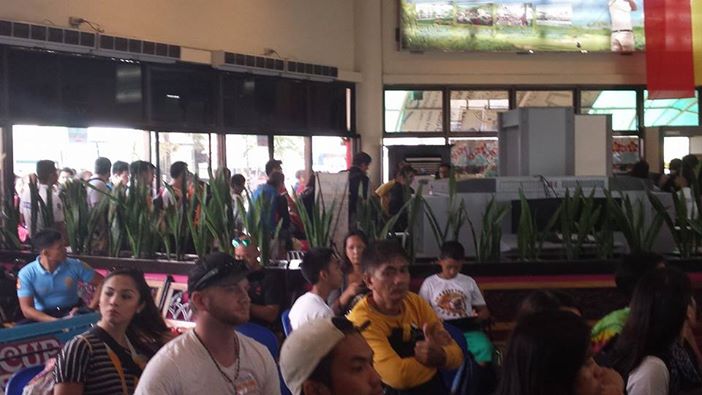 Before heading to Boracay, I read on a blog that one of the best things about Boracay was the crowd and meeting other tourists. Honestly, I don’t remember the last time I was surrounded by so many ignorant people. I might have been totally unlucky and it’d be different if I just stayed in a resort, but I think that if you’re staying only at the resort you won’t have a full experience anywhere.

The majority of people who come to Boracay are either Korean tourists who keep to themselves, or the worst types of backpackers who go there with one mission – to tick the Philippines off of their list, get wasted, and have sex with whoever comes along. Imagine a full moon party at Koh Phangan in Thailand, but every day!

I think most of these people had no interest or knowledge about Filipino culture and were only there to party. My hostel was full of random strangers sleeping over every night and the beach was full of drunken people from early morning onwards. I enjoy parties and drinking, but parties in Boracay were just too much for me. There was nowhere to escape from them.

Lack of Filipino culture in Boracay

I guess it’s not surprising then that Filipino people quickly figured out what kind of people come to Boracay and ‘adjusted’ the place to the crowd. There was nothing Filipino in Boracay, everything was designed for tourists in the cheesiest and most horrible way possible.

One of the biggest attractions was an expensive restaurant called Hobbit Place that hired only dwarfs (and call them midgets on their website) as waiters to take photos with while you eat your overpriced burger.

Later, I realized that the local Boracay Filipinos don’t really give a damn about visitors at all. I had a mermaid swimming class scheduled, as I thought it would be a fun activity to try and something interesting to write about on my blog.

Less than 10 minutes before I was supposed to show up for the class, I received an email stating that the class is canceled and can be rescheduled for next day. When I replied to ask what time the class is, I received two emails – one stating that it’s at 10 am and another at 3 pm. When I showed up the next day at 3 pm there was nobody there.

I knew Boracay was a place to party, but I thought that I could just enjoy the stunning beach during the day without having to interact with anyone. I couldn’t have been more wrong. The moment you step out of the hotel in Boracay, you’re practically under attack.

Annoying vendors are everywhere: the streets, the shops, and sadly, even the beach. A well-traveled reader might ask “what’s the big deal” as there are vendors everywhere in South-East Asia, but in Boracay, they aren’t just screaming at you ‘Madame, massage?!’ when you’re passing by.

While I was lying on the beach every 5 minutes I had a different guy standing on top of my head trying to sell me some crappy souvenirs or boat rides. The nice Filipinos I had read about before heading that way were nowhere to be found. and instead, the place was full of people who didn’t respect the fact that I wanted to enjoy the beach in peace. 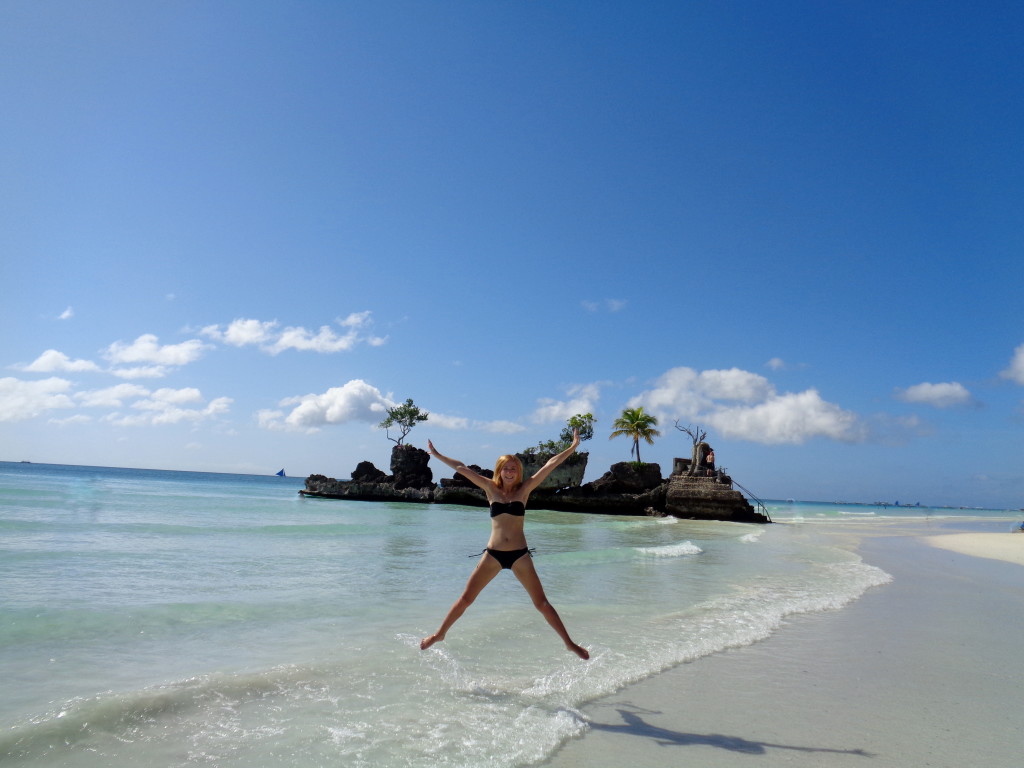 Cool photo? This is what you can see when someone removed people from the background ( the in my opinion beach is never that empty in Boracay!) 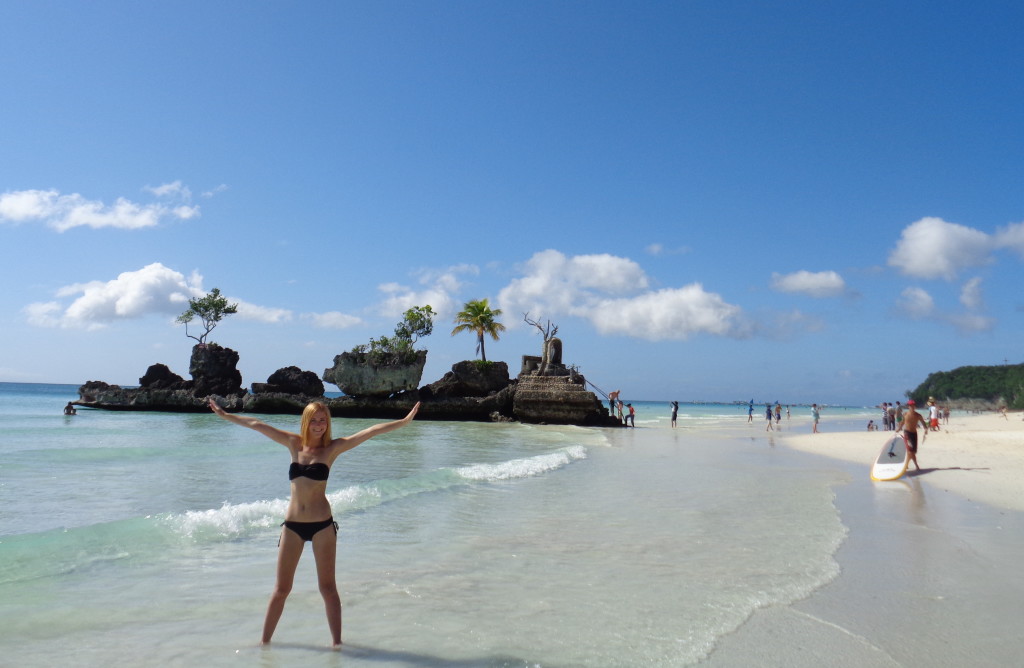 Seeing this beautiful beach being destroyed…

The worst thing about Boracay was actually the beach. Not only because I was being bothered by annoying vendors, but because the beautiful island of Boracay is constantly being destroyed by consumerism.

The white beach in Boracay is really a nice one, comparable to those in Fiji or any other Pacific island, but how can you even enjoy its beauty when you’re surrounded by Starbucks, Pizza Hut, and other random restaurants right on the beach.

There’s no way to escape them, especially when every visitor is there just to get drunk, shop, and maybe overpay for some kitesurfing.

Before you consider visiting Boracay think twice if this is really what you want to remember from the Philippines. I’d recommend going to another Filipino island instead, such as Bohol or Palawan.

Recommended places to stay if you choose to go to Bohol:

Before you place a comment remember that I don’t discourage people from going to the Philippines, I just don’t recommend Boracay unless you like places like this (and I know some people do). Safe travels!

1,238 thoughts on “Boracay – The Worst Tourist Trap in the Philippines”