Tunisia has never been on the top of my list of places to see when growing up. To be perfectly honest, I ended up in Tunisia a bit by accident. However, after a week spent in this North African country, I’ve realized that Tunisia offers a lot and everyone can find something to enjoy!

It used to be one fo the top destinations to visit for Europeans up until 2010 when tourists just stopped going and became afraid. Tunisia isn’t as dangerous as people usually think, in fact it’s not dangerous at all.

I’ve traveled to Tunisia solo at the age of 21 and it was one of the best travel experiences I’ve ever had. I’m so happy that I see Tunisia being promoted all over again and as I think it’s a great place to visit in Africa.

Reasons to Travel to Tunisia

Tunisian cuisine ranges of dishes influenced by Arabic, Mediterranean and French trends. Similar to Moroccan dishes, Tunisian meals are rich in spices such as coriander, cumin, saffron and harissa.

Slow-cooked meats and couscous with eggs are commonly found on local plates. There is no problem with purchasing alcohol, since resorts have their own policy and can sell it to tourists. It might not be the best quality, but it’s there if you want it to be 😉

Why You Should Visit Tunisia Now? 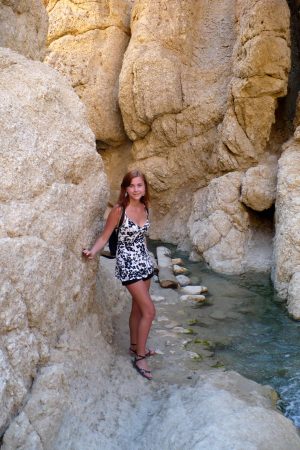 Tunisia is famous for its resorts located all over the country – Hammamet, Sousse or Monastir. No matter which place you decide to visit you can be satisfied with the standard of your accommodation. One can often meet some of the local camels hanging out at the beach around the hotel.

I tried some parachuting and jet-skiing, both of which are available at almost every beach in Tunisia, and I can definitely recommend those activities. The wealth of marine life, particularly in Hammamet area, makes Tunisian beaches popular for scuba divers.

The country offers plenty of historical sites such as Tunis. However, this ancient city turned out to be a super touristic full of souvenir shops and kids trying to sell you anything they can.

I would rather recommend spending more time at the small village of El Djem, located 20 minutes away from Sousse. Its impressive ruins of the largest Roman amphitheater in Africa can satisfy those interested in seeing ancient Roman ruins without the tourists.

The best part of visiting Tunisia is an excursion to the Sahara. I’d say it’s the best trip in Northern Africa! The first stop on my tour was Tozeur, Sahara’s gateway.

I quickly ended up on a donkey riding to a spectacular oasis. There was always a local guy showing how to climb a palm within 30 seconds, some young kids jumping from the cliff, and others trying to sell me green tea in Polish.

*It still exists, but regular excursions don’t go there anymore and it might be covered in sand.

The biggest attraction was surely George Lucas Village. If you watched one of the first new Star Wars movies, you might recognize houses built specifically for this occasion.

But let’s not forget about other great things, such as oasis. I got to see some coconut tree climbers, wild donkeys and locals just enjoying their time out in nature.

I drove through the part of the Paris-Tunis-Dakar rally racecourse. If you’re scared of roller coasters then you should probably skip this activity, because it includes plenty of jumping on the dunes.

When all passengers were holding in for dear life, the driver was steering with just one hand. It was amazing!

After the drive, I got to see Ong Jemal, the neck of the camel rock where a local guy gave me a salamander to play with greeted me by some camels.

Most travelers are more than satisfied with a sunset ride on a camel and they pass out in the tent. But if they get ready to wake up at 3:30 am, you’ll be treated to the best sunrise!

You can watch from the desert especially when it’s a salt desert, similar to Salar de Uyuni in Bolivia.

On the way back from the Sahara I got to stop at a local Berber village. Their houses are built out of mud bricks, making them perfectly suitable for the desert.

I was amazed at how many people are able to live happily in the same small space. I got to make my own bread and bake it on their stove, but I was constantly being disturbed by one of the few kittens hanging out in the area.

While it’s just a glimpse of my adventures in Tunisia, I cannot wait to travel to Tunisia again? Definitely!

Welcome to my beautiful country in any time 🇹🇳❤🤍

How do you know most tourists don't get sick? Does that mean some do?

I hope your visit was worth while ???

I totally agree! Spent a summer studying Arabic in Tunisia and am dying to go back. I'd especially be interested in seeing how everything has changed after the revolution (I visited the summer before the Arab Spring).

Yeah, tho after what recently happened in Tunisia I think visitors will be a bit scared to go there :(

Thanks, Anna! Actually, most of the guides / travel blogs from the web said Sahara tour was organized by hotel / hostel / resorts, but with that, I can't plan the exact date and time for the tour unless I arrive Tunisia, which not allow me to arrange flight ticket to there ahead.

Tunisia is going to be my next trip in May! I also planned to go to Sahara for 2 - 3 days. I originally wanna find a tent to stay at night and enjoy the starry night, but after seeing your post, I don't think so as it would be freezingggg! Anyway, I just wonder if you could also share with me the contact or recommendation for your excursion to Sahara. Is it organized by a local tour company or individual who provides a jeep for the ride? Thanks!

I organized the tour through my resort. I can double check for you which company was it.