South Georgia Island: Photos that Will Make You Want to Visit!

South Georgia Island was the best wildlife experience in my life, and truth to be told – I’ve had plenty of amazing ones. As a big fan of penguins (I might be a bit obsessed), I’ve been saving for a while to go to South Georgia on my way to Antarctica and I cannot be more glad I went. South Georgia island did not disappoint.

To make things clear, South Georgia island isn’t in Antarctica. It’s actually a 2-day sail from the nearest Antarctic territory. South Georgia and the South Sandwich Islands (SGSSI) is a British Overseas Territory in the southern Atlantic Ocean. It’s known as one of the most inhospitable islands in the world. The island has no permanent inhabitants and the government of South Georgia consists of 4 people who reside there just temporarily.

While there might be no humans on South Georgia it doesn’t mean that other species haven’t made this place home. In fact, the biggest penguin colonies are in South Georgia – and we’re talking about thousands and thousands of penguins, up to a million in some spots. Not to mention seals, rare birds, or whales.

How to Get to South Georgia?

If you’re a penguin lover you must be hooked already. It’s understandable that now you want to know how to get there. There is no visitor accommodation ashore, therefore most people visit by cruise ship or yacht.

While in the past you could do a boat trip just to South Georgia from Falkland Islands (that does have an airport in Stanley), it’s no longer on option. While you can still leave from Falklands (but frankly it’s cheaper to leave from Ushuaia in Argentina) all cruises that goe to South Georgia treat it as a stop before heading all the way to Antarctica.

I did a 19-day cruise that stopped in Falklands and Antarctica, which also allowed me to spend 4 days in South Georgia. While you cannot land on the island all the time, we managed to do 4 landings for 2-3h each time and a bunch of zodiac cruises as well.

Cruise ships are only heading that way between mid-November and early March. Otherwise, you would need an ice breaker.

You could sail to South Georgia yourself, but you still need to obtain all the permits. It will cost you about 100+ GBP per person for max. of 3-day visits. You also cannot spend nights on the land, fly drones and/or helicopters.

You may think that if you’re going on a cruise, it will be an all-day relaxing trip. Well, cruises to Antarctica aren’t the same as cruises to the Caribbean. While you’ll be well-fed, the ships are smaller and your only attractions onboard are a small spa, bar and lectures from marine biologists, geologists, historians and other people who know what they’re talking about when it comes to this region.

As I described in my cruise diary, each landing on the island is limited to 100 people maximum at the time and strictly regulated. Every single little piece of sand has to be removed from shoes, velcros, zippers, anything you’re taking with you. It’s a long cleaning process that’s thoroughly checked before each landing.

Fortuna Bay was our first landing in South Georgia, which definitely impressed everyone. While waiting to land and cruising on a zodiac, we watched a ton of elephant seals doing their thing, among fur seals breeding their young. And naturally, King Penguins.

The Bay wasn’t actually supposed to be our first stop in South Georgia. In fact, we weren’t meant to visit it at all, but our scheduled landing at Salisbury Plain got canceled due to high swells and therefore an impossible landing with a zodiac. While I was bummed, Fortuna Bay also delivered despite bad weather conditions.

Fortuna Bay had about 10,000 breeding pairs of King Penguins at the time we visited. All various stages of development. Some of the ‘babies’ still covered with their thick furry brown coats looked huge next to their sleek-lined parents.

Some were having their first molt, losing the brown fur to reveal the juvenile yellow cheek patches; their next molt will show the bright orange markings on the cheeks.

Along with the King Penguins and Elephant seals. These mammals grow to over 9 feet in height with weights of up to 1 ton.

While the giant Elephant Seals are indeed gentle giants, the fur seal are quite the opposite. The staff was always joking that they’re born angry – hiss and attack everything around them. They do it to scare away other males from their potential female partners. 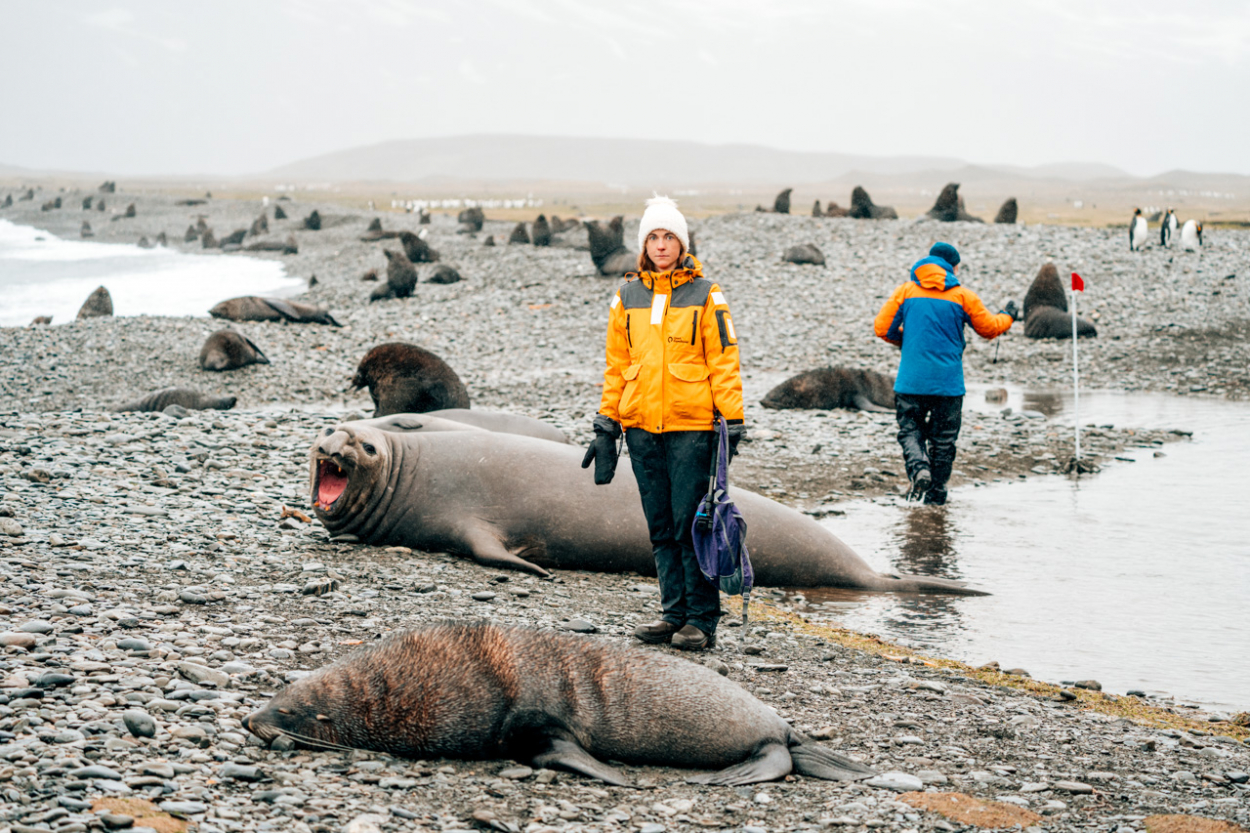 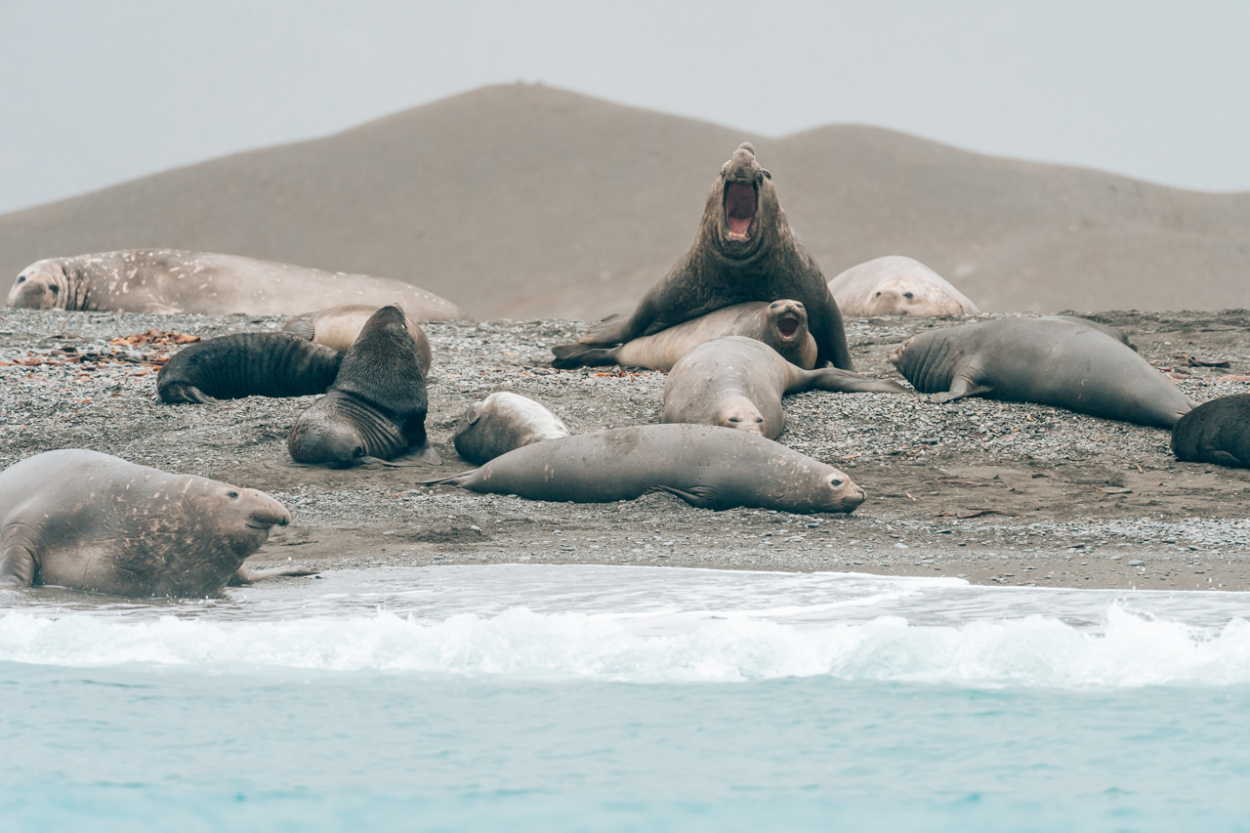 Fortuna Bay is the starting point for the infamous Shackleton walk which was the last part of Shackleton’s epic rescue journey on the way to Gritviken. While we didn’t hike there, due to bad weather conditions, even climbing to the top of the hill gave us an excellent view of this big penguin colony. 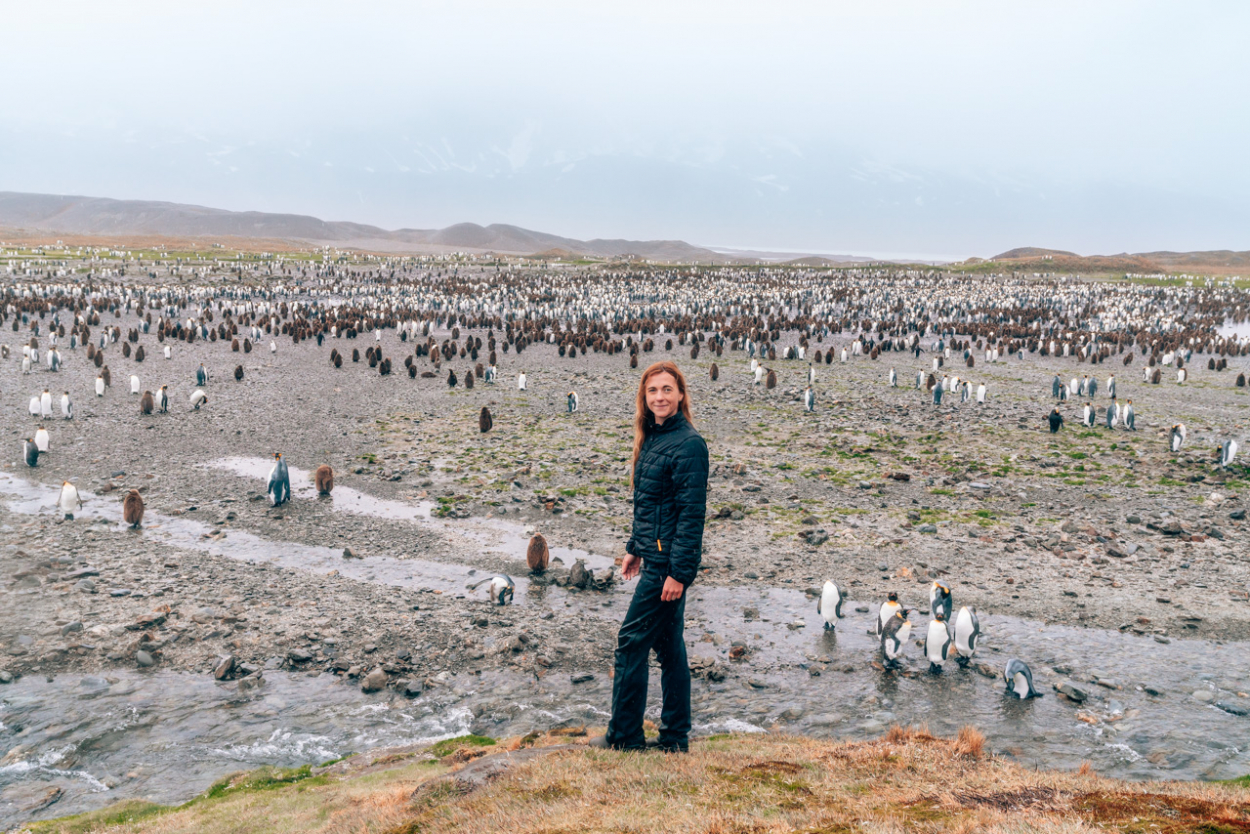 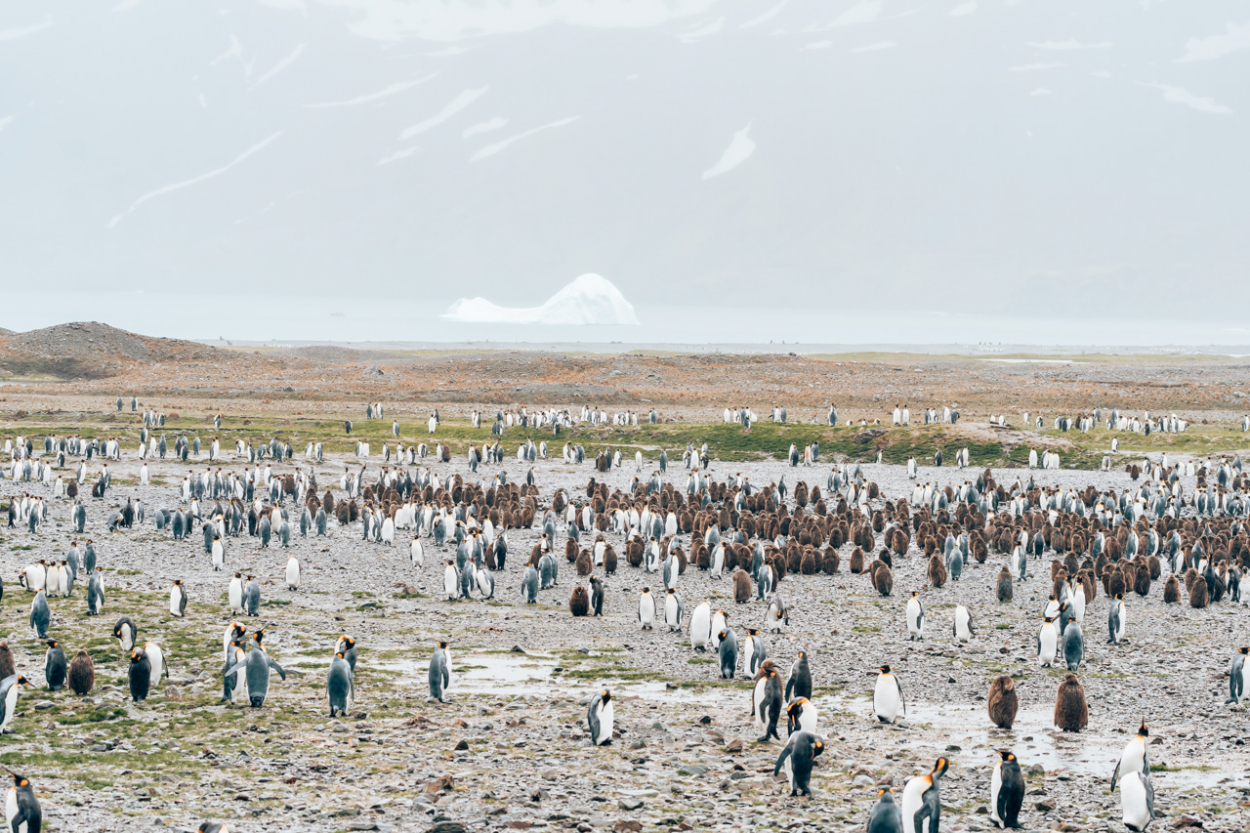 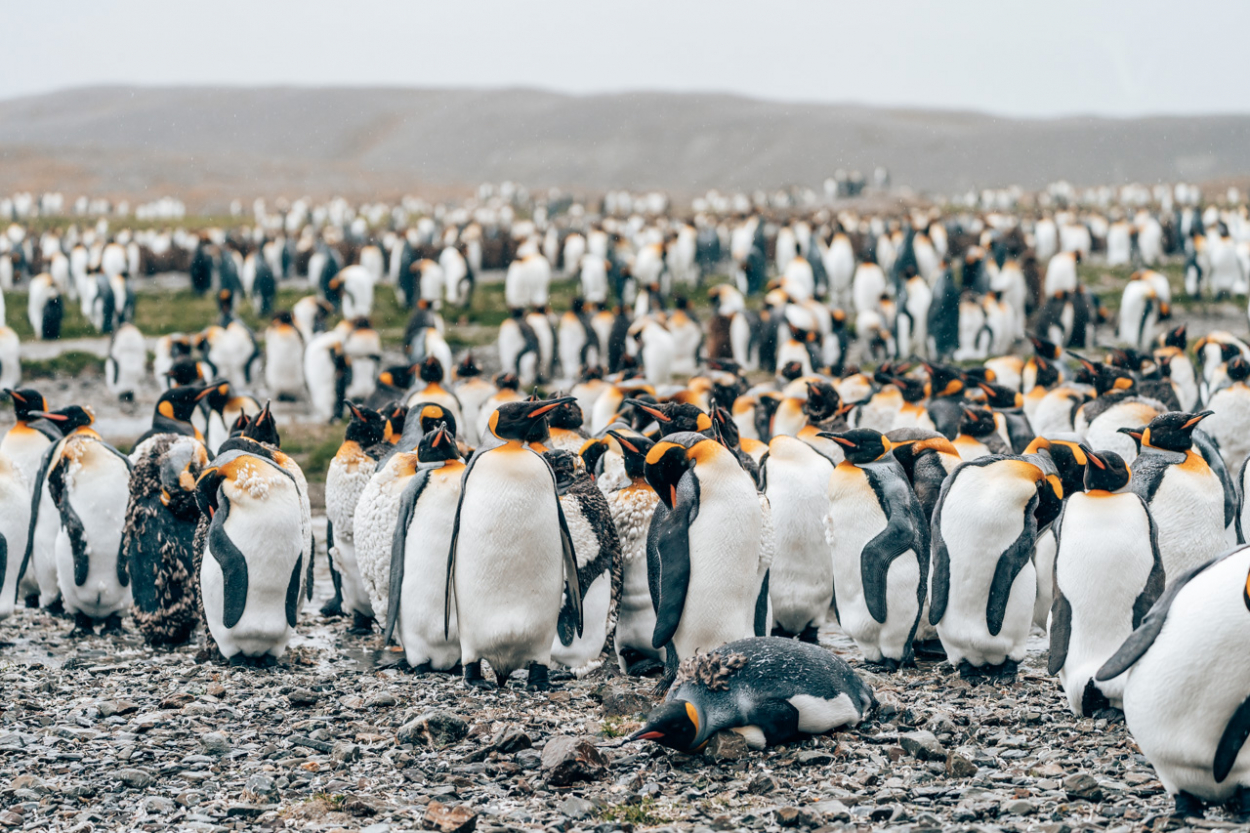 Gritviken might be one of the most historically important stops of South Georgia. While the wildlife was present, the place commemorates the history of many explorers and primarily Sir Ernest Shackelton and his ill-fated expedition Endurance. Especially since his grave can be visited at Grytviken.

To tell you his long story short, Shackelton was an Irish-born British explorer who dedicated his whole life to Antarctic travels. He reached the South Pole but wanted to be the first man to cross the Antarctic continent. 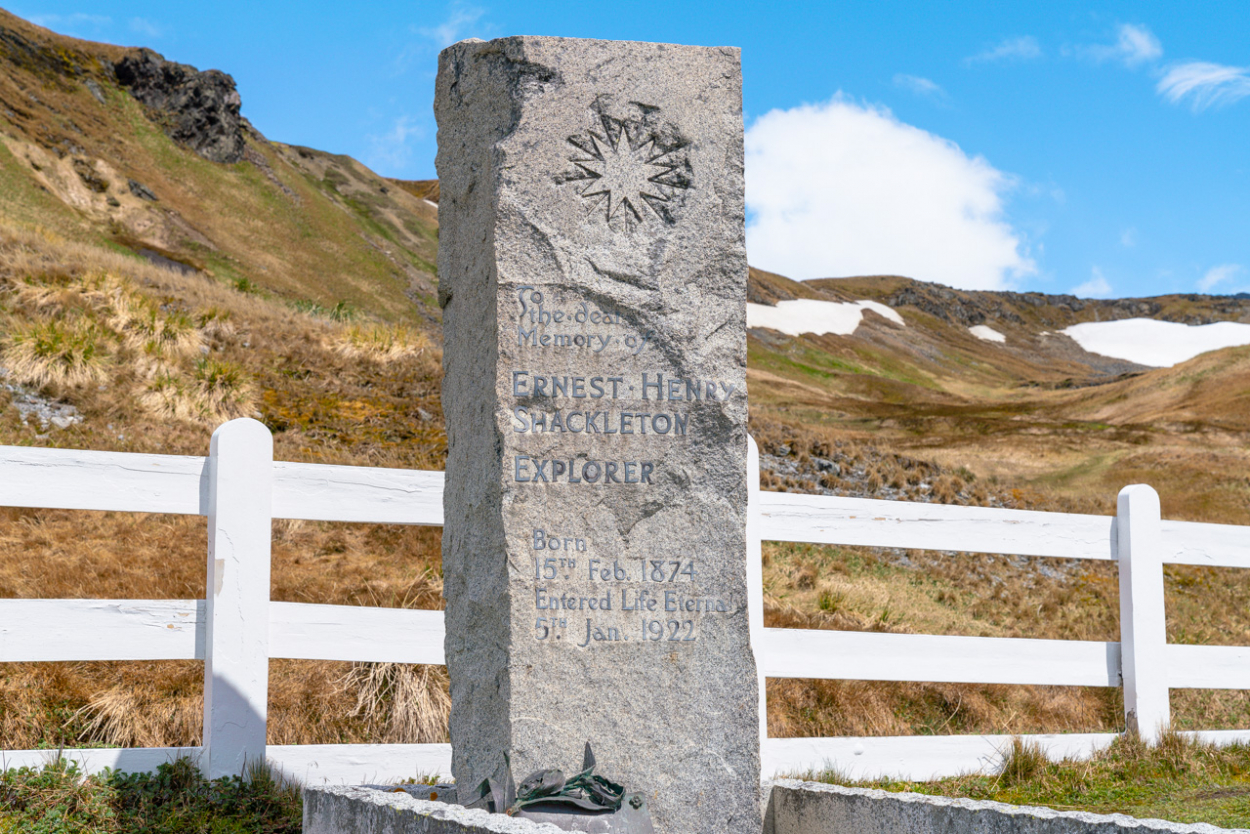 While most thought he was crazy with a tough winter approaching and his low budget for this expedition, he managed to receive 5000 applicants of other “crazy people” wanting to join him. He reached South Georgia, on route to Antarctica, along with 28 men, dogs and even a cat – Mrs Chippy.

Unfortunately, after the ship got destroyed by ice before reaching the peninsula, Mrs Chippy (who was actually a male after all) was killed by Shackelton along with dogs, as he claimed none of the animals had a chance of survival.

Shackelton wanted to make sure that his crew had a chance of surviving and crossed the ice, followed by sailing to the Elephant Island, an uninhabited island north of South Shetland Islands.

Upon reaching the Elephant Island, Shackelton decided to leave 22 men there and embark on a journey back to Gritviken, South Georgia with 5 other men to call for help.

It took them 16 days in excruciating conditions sailing to reach South Georgia and getting through to the other side of the mountainous island, and 3 months to go back for the others left on the island.

Shackelton has attempted another expedition a few years later but died unexpectedly in South Georgia and his family never returned his body, saying he belonged there. We visited his grave at Gritviken.

Gritviken isn’t just a place of burial. It’s a ghost town as it used to be home to roughly 500 men and their families, all who worked at a whaling station that operated there between 1904 and 1966. We can see the remains of it today.

There is also a South Georgia museum, post office, church, hiking opportunities and many fur seals with their pups enjoying the sunshine. 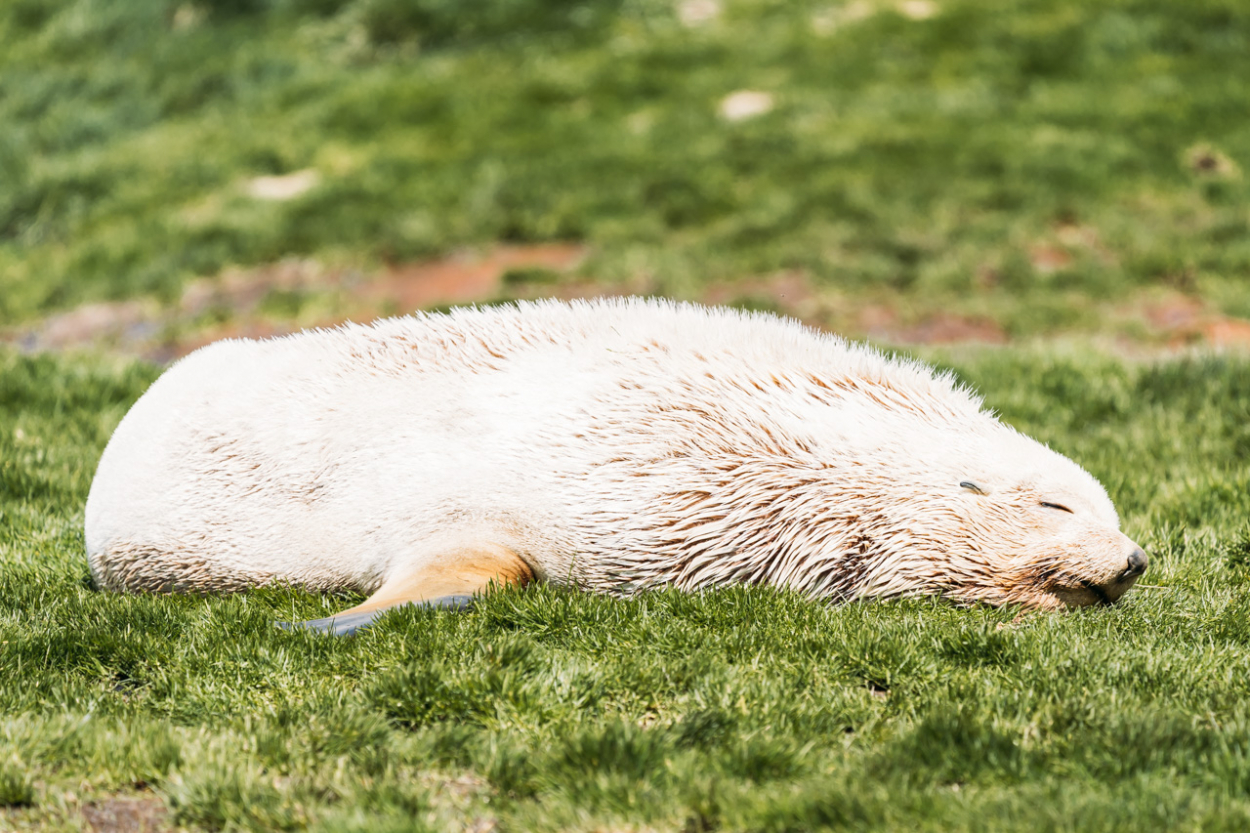 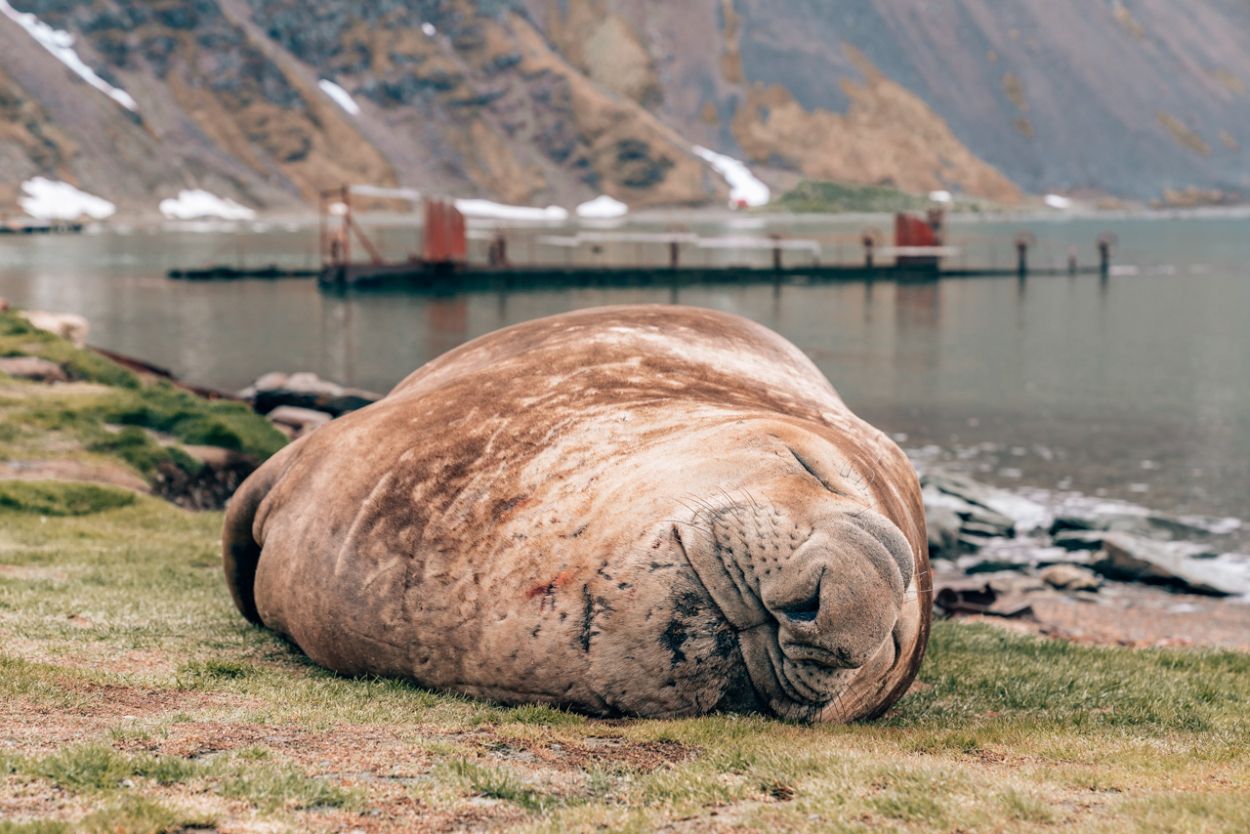 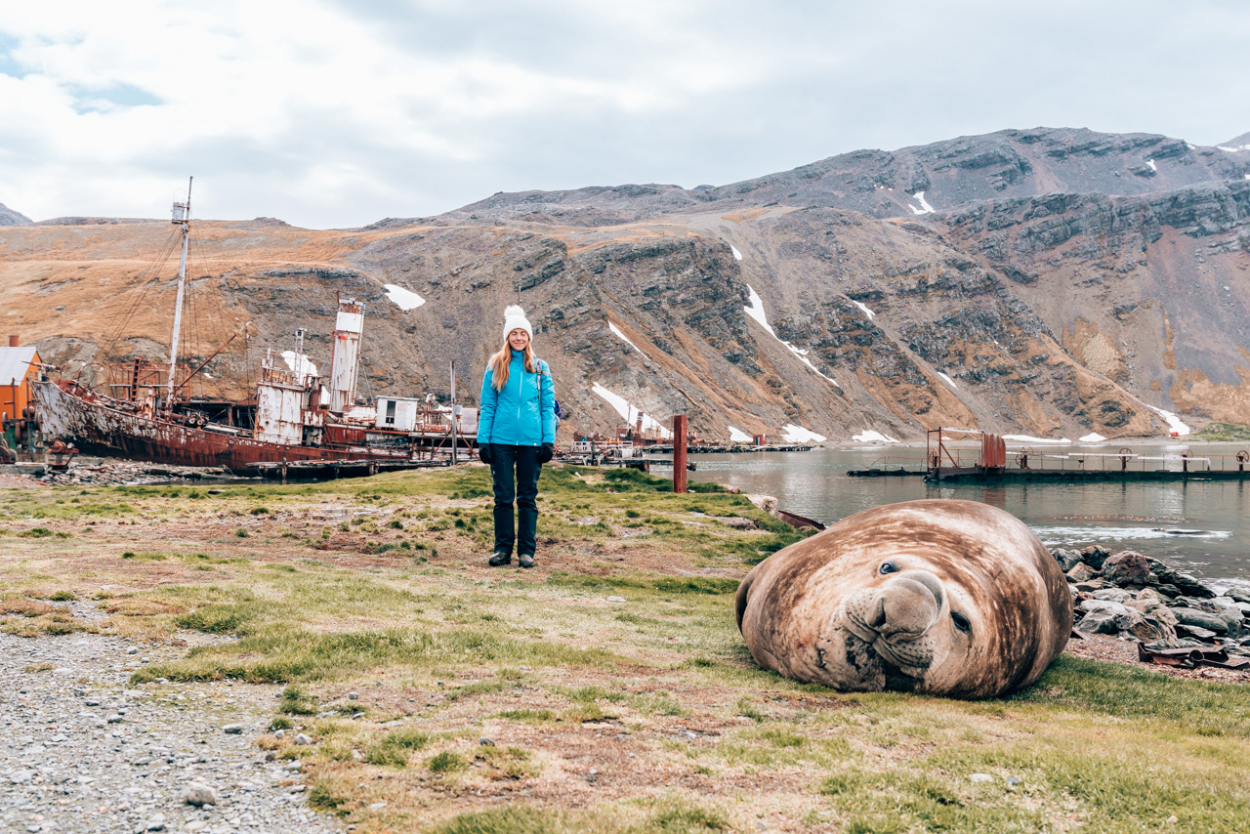 St Andrews Bay, just south of Mount Skittle, is the location of the biggest King Penguin colony in South Georgia. Surrounded by snow-capped mountains it’s a beautiful spot, but requires visitors to have a lot of patience. The landing is very difficult (we had to actually reschedule this landing twice before even attempting it) and then cross rivers.

While you can read everywhere about a million penguins or half a million pairs, but the truth is it has never been counted before.  Penguinologists on my trip actually flew the drone over the colony to count it – if you want to know the exact number you’ll need to wait for the University of Oxford and PenguinWatch official info.

The estimated number of penguins is about 700,000 breeding pairs. When you count penguins you only count nests, not the actual penguins and never chicks as they may not survive the winter. That said, if you hear 700,000 pairs there are twice as many adult penguins, plus you can add all the chicks you see. I would say 1.5 mln penguins would be a good guess for now.

It was really amazing that the noise level in a penguin colony could be that loud and then the parents out of the symphony of calls can still identify their own offspring. 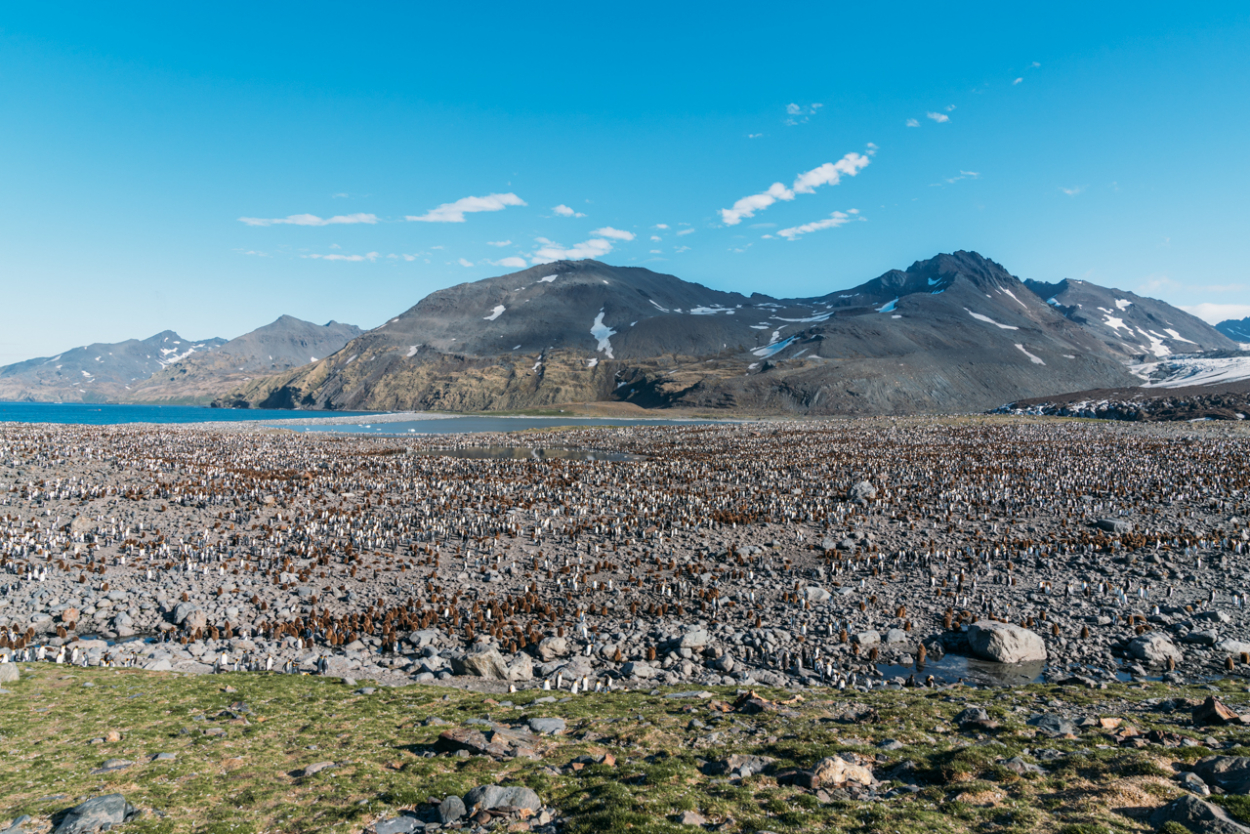 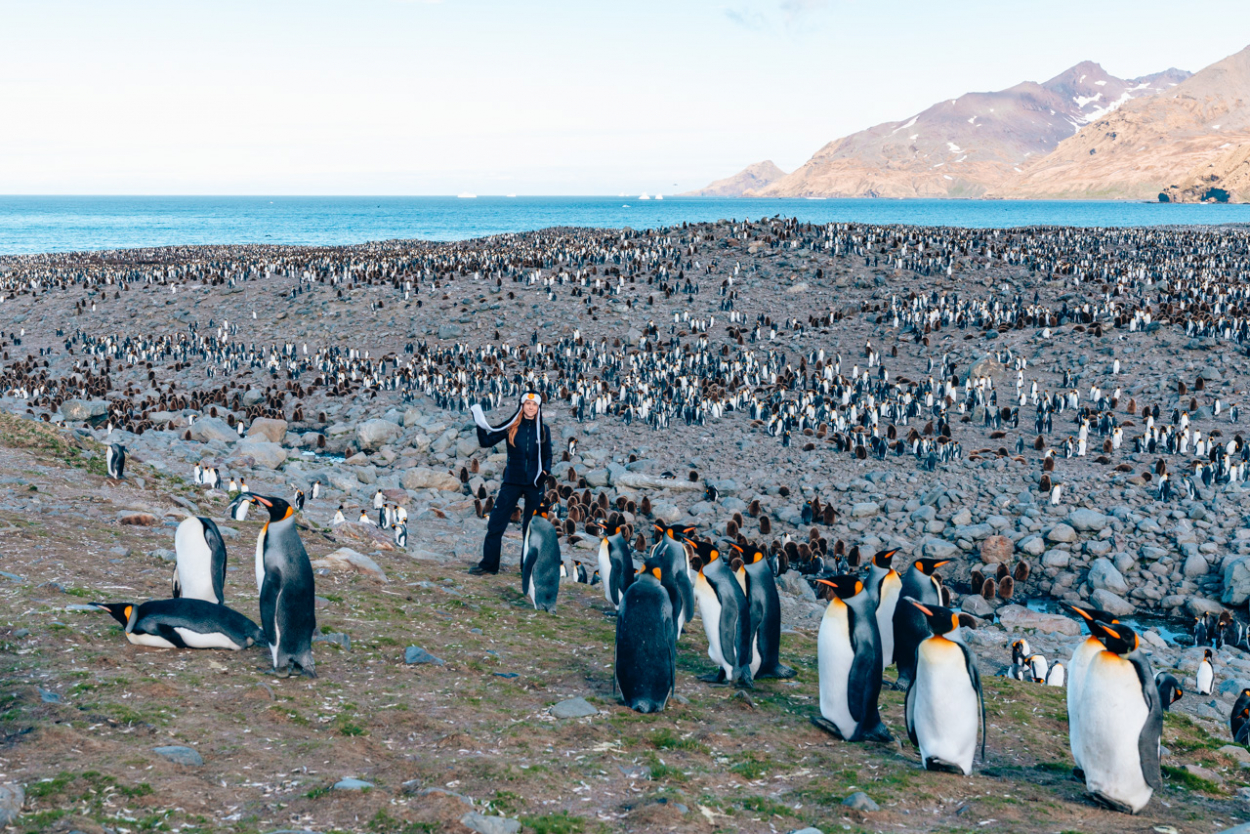 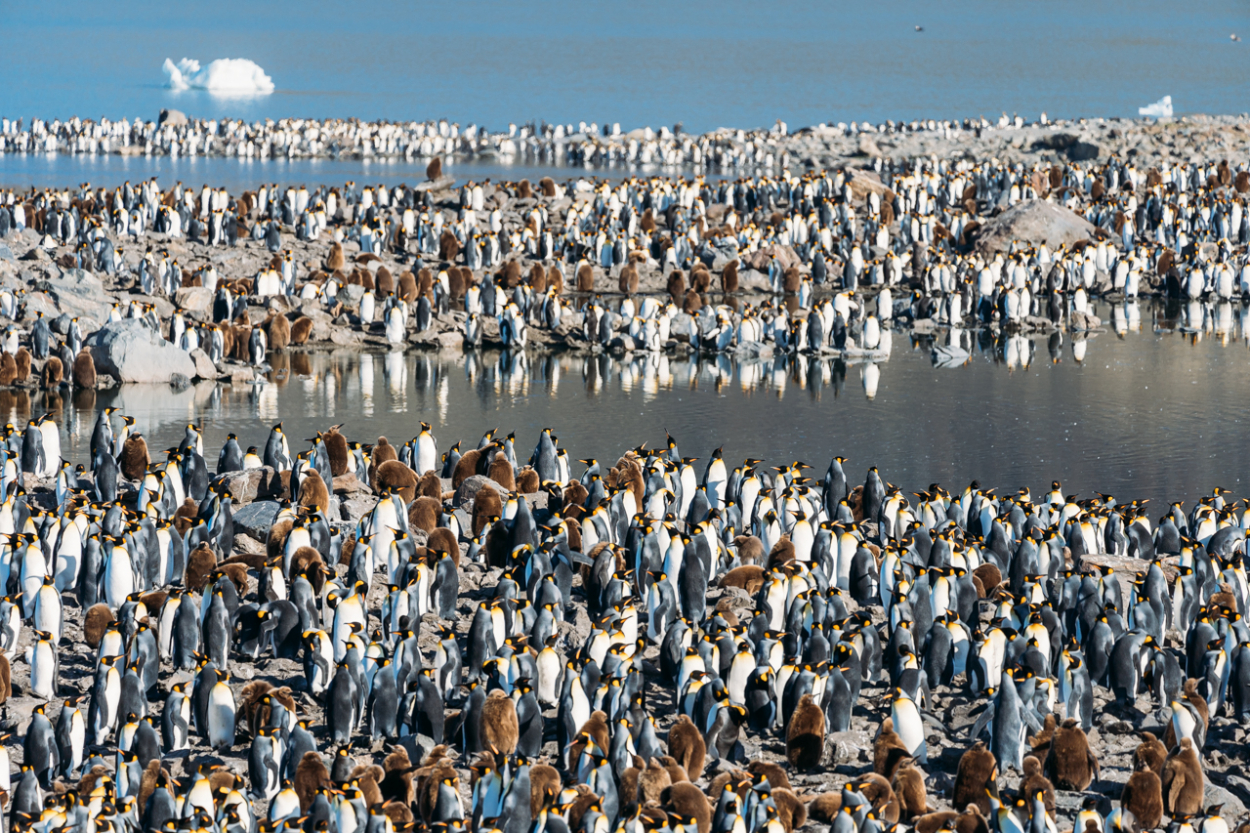 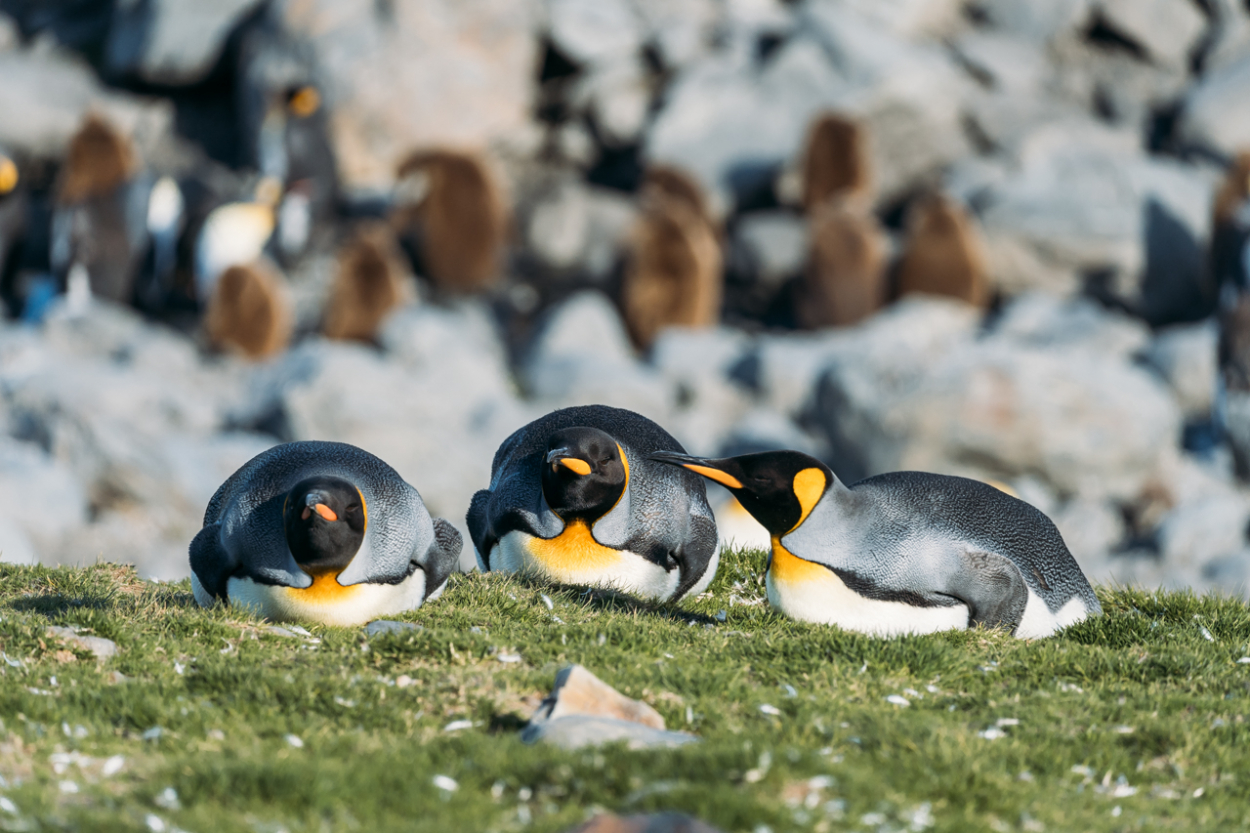 Close to the southeastern tip of South Georgia, Gold Harbour lies at the foot of the Salvesen Mountains. Gold Harbour is referred to as “the jewel in the island’s crown.” The name Gold Harbour derives from the yellow appearance of the cliffs that enclose this oceanfront during sunrise and sunset.

After St Andrews Bay I thought it couldn’t impress me even more, but God, I was very wrong. It was my favorite stop in South Georgia.

Tons of tons of elephant seals reside there, mixing with 25,000 breeding King Penguins pairs with their young. The chicks always curious to see what’s going on were often coming way closer to us than anywhere else. One penguin even followed me around, poking me with his beak. 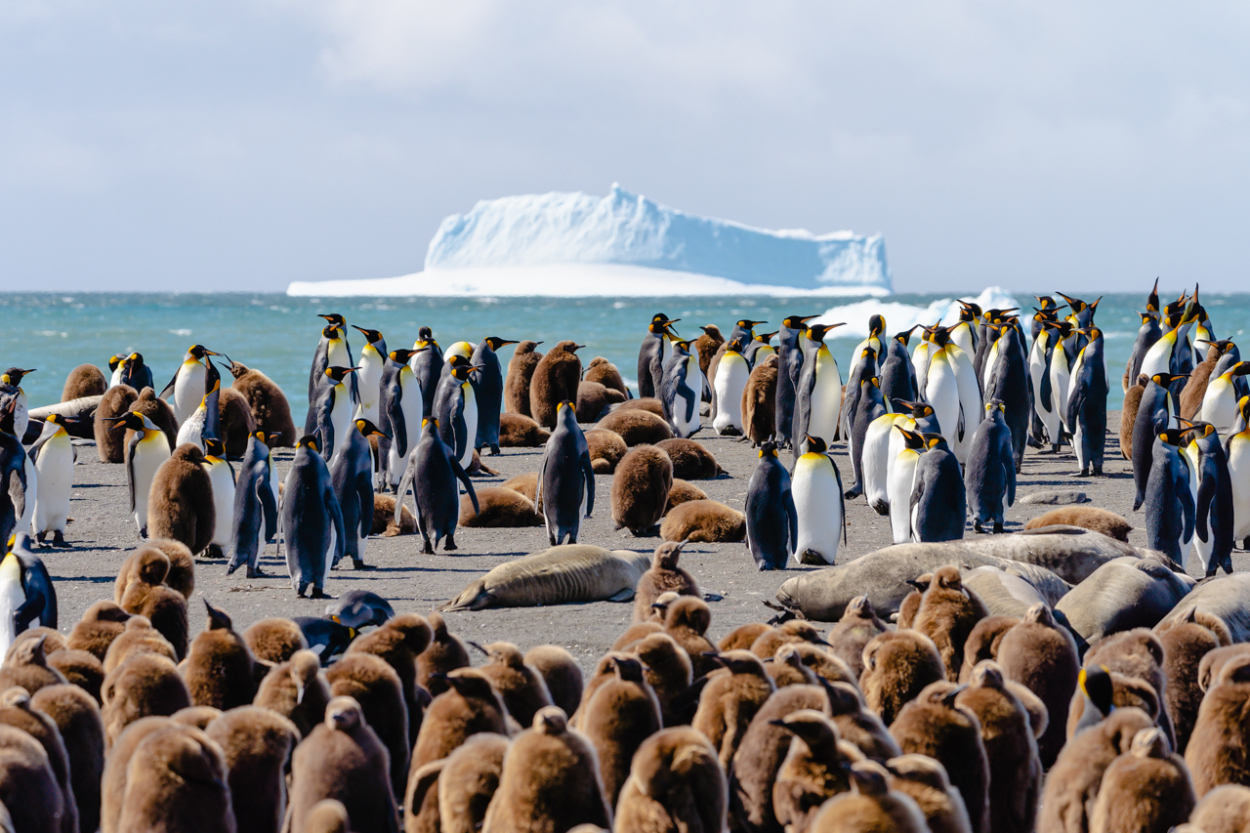 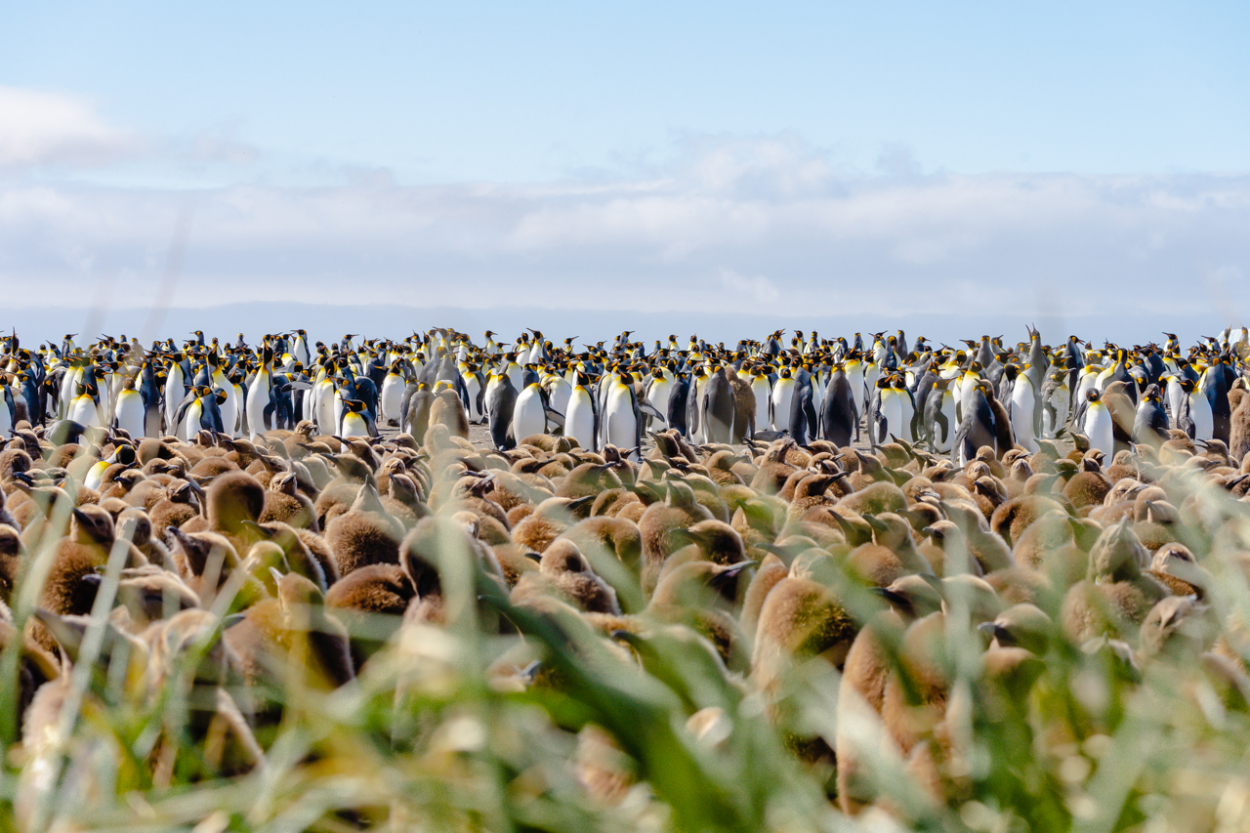 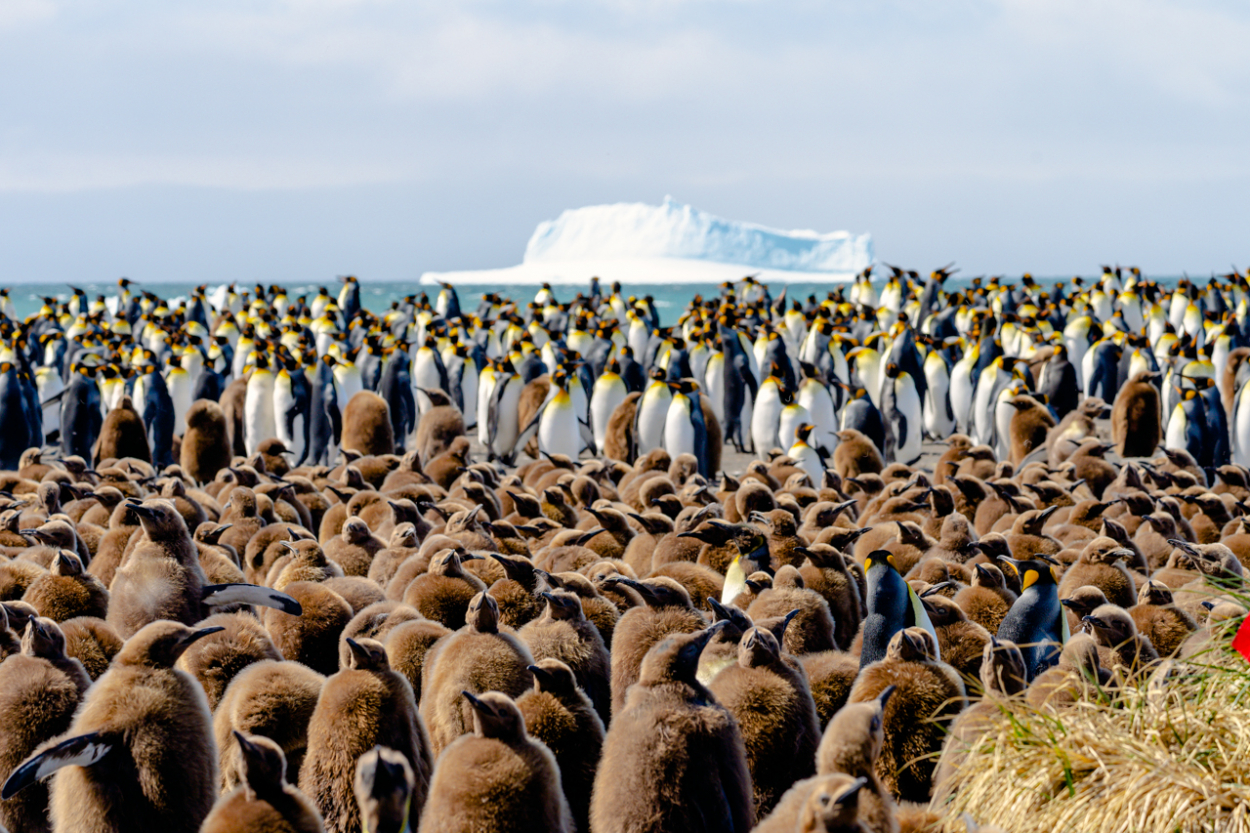 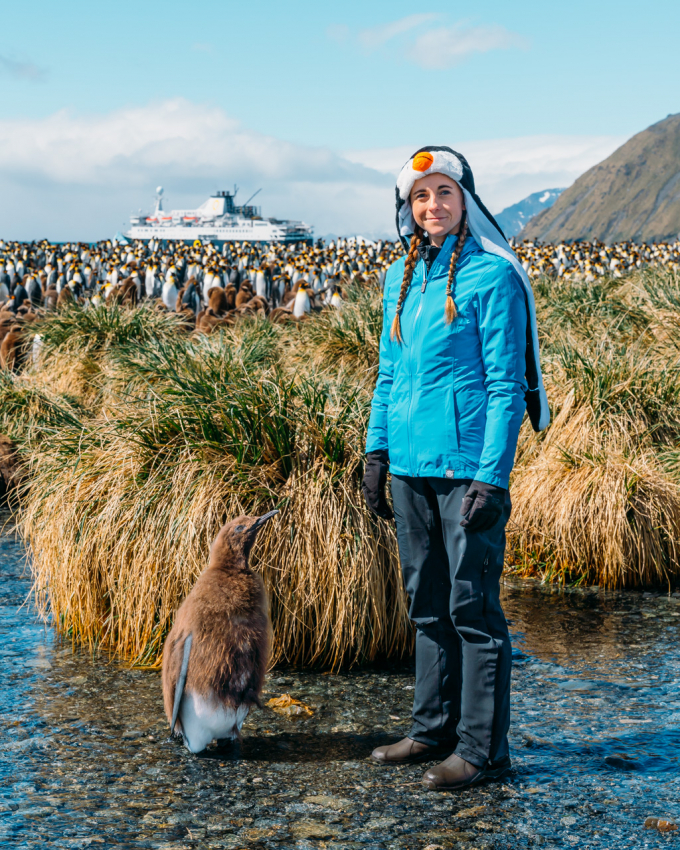 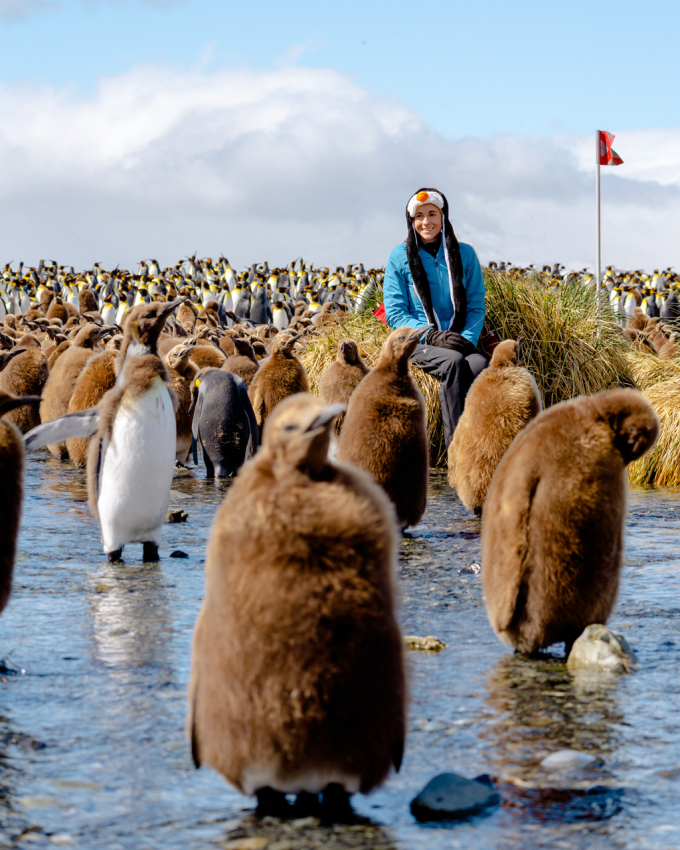 Other places we didn’t land on, but we cruised around on zodiacs:

Beautiful fjord on the south-eastern part of South Georgia. You can never go on land there, and rarely do a zodiac cruise, but it’s a wonderful journey cruising through this 7-mile long fjord. The color of the water is marvelous, and we managed to spot a leopard seal just chilling on a piece of ice.

Royal Bay was a great spot for Macaroni Penguins, which can rarely be seen in South Georgia. People on another zodiac also saw a seal being born. 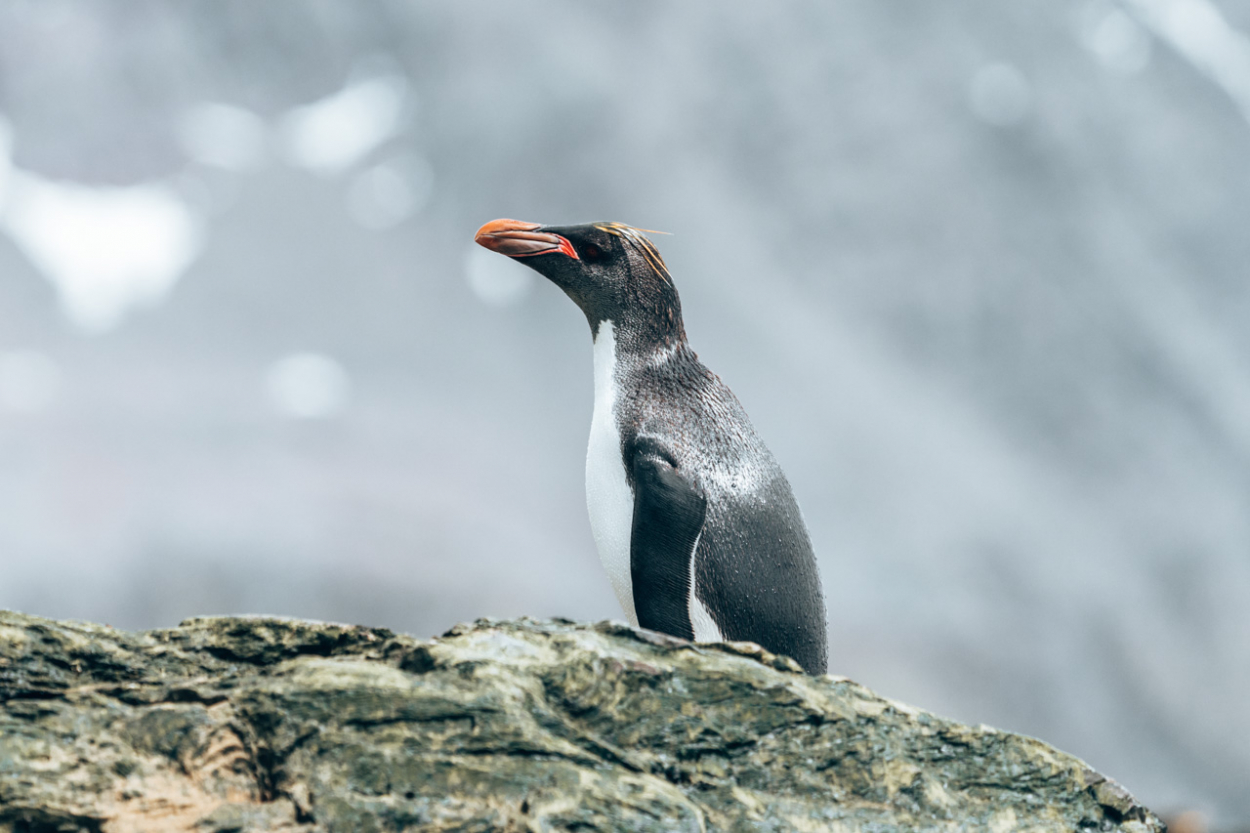 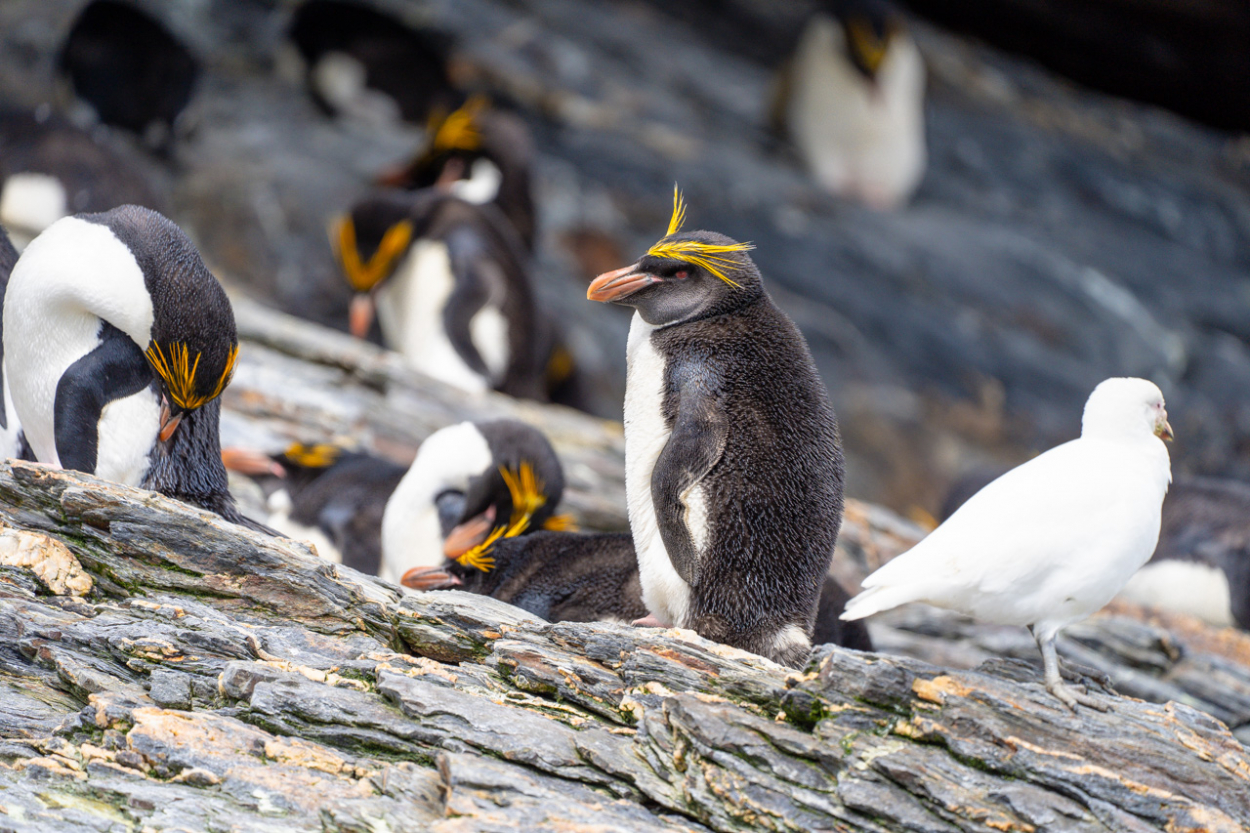 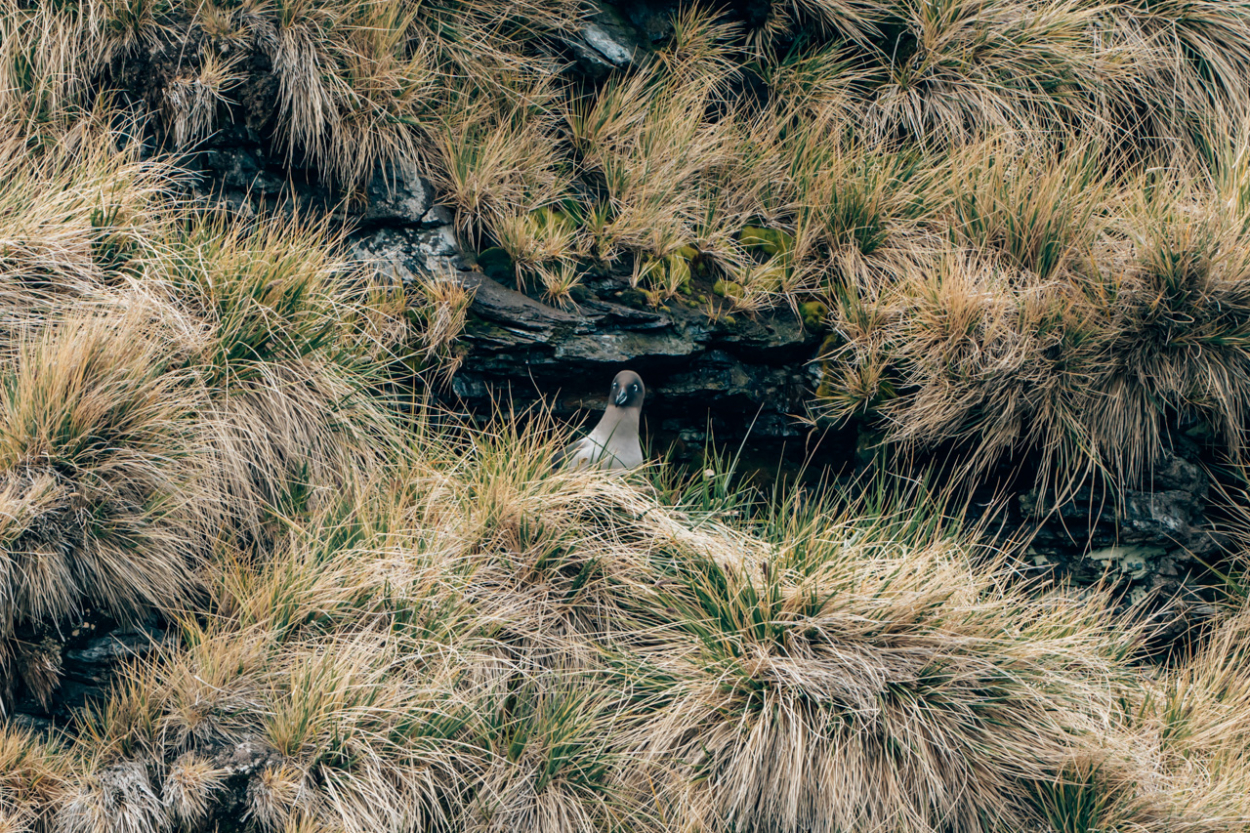 Any questions about these photos or traveling to South Georgia Island? Let me know!

1 thought on “South Georgia Island: Photos that Will Make You Want to Visit!”