Both my husband and I are obviously frequent travelers, so we didn’t want to stop traveling when I got pregnant. We moved twice during my pregnancy, first from California to Texas and then from Texas to Italy.

After talking to my pregnant friends or reading forums I realized that many people freak out the moment they find out they’re pregnant and stop doing anything. At the very beginning of my pregnancy, I was freaking out if I should do certain things including traveling.

As the pregnancy progressed I relaxed and realized that as long as I feel good the baby is probably fine. Otherwise, the baby would let me know he doesn’t like something. 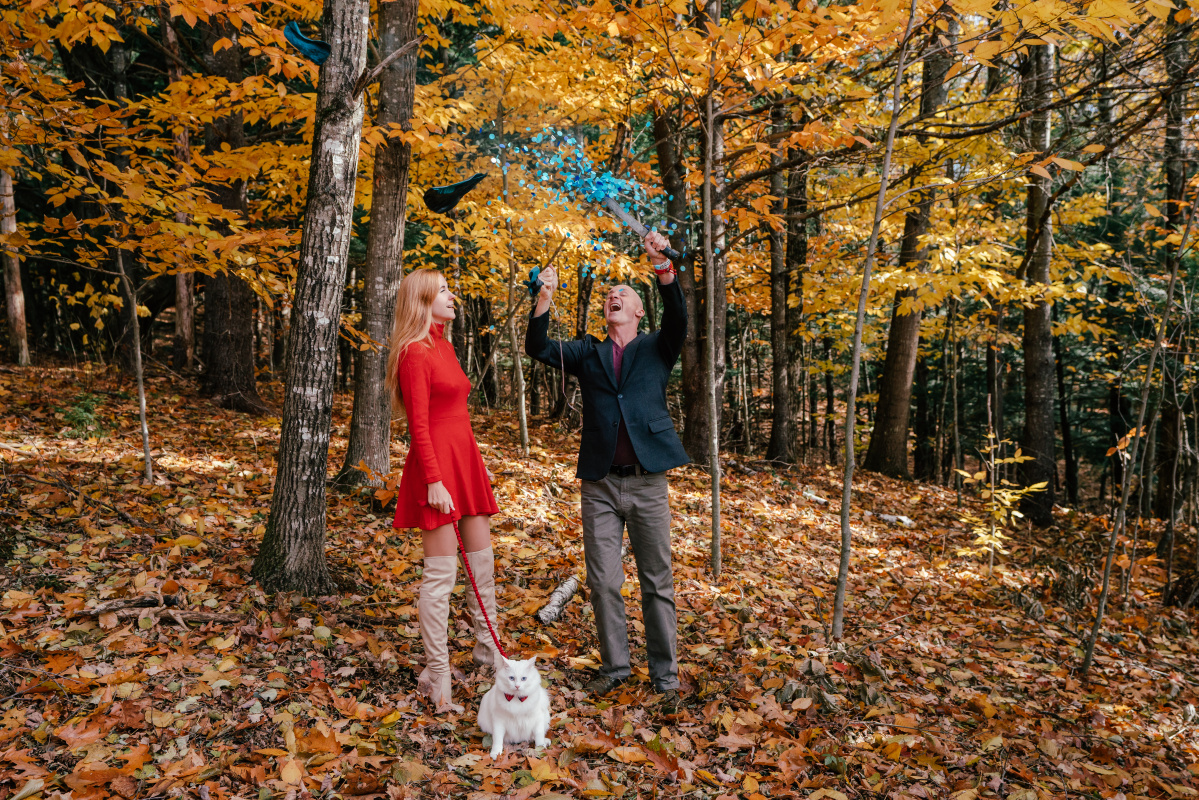 Is It Safe to Travel During Pregnancy?

If you have a normal, healthy pregnancy, it can be safe to travel during most of it. It’s been proven that miscarriage can’t be caused by road trips or flying, so please don’t get sucked into the forums and listen to what some uninformed people say there.

If you post something on social media that you travel frequently when pregnant you might be a subject of ‘mommy shaming’. You might be told that you shouldn’t be eating this or that, that something abroad will definitely kill your baby, that planes are dangerous and other things that are fake news.

But, you probably don’t want to travel much in the first trimester. I actually had to cancel a trip to Mexico for my friends’ wedding, because I was feeling so tired, in pain, and couldn’t breathe at all due to severe rhinitis.

It’s not advised to fly after 36 weeks. Also, technically after 28-32 weeks (depending on an airline) you need to show a statement from a doctor saying that you’re clear to fly, but it really depends on how big you’re carrying and the gate agent.

In my case, at 25 weeks most people couldn’t even tell I was pregnant, so no one ever asked me for anything.

You might want to get an aisle seat because the further along you are the more often you’ll go to the bathroom and you don’t want to crawl over people every time.

In case you’re wondering… There is no harm done with going through either the body scanners or walk through metal detectors at the airport. 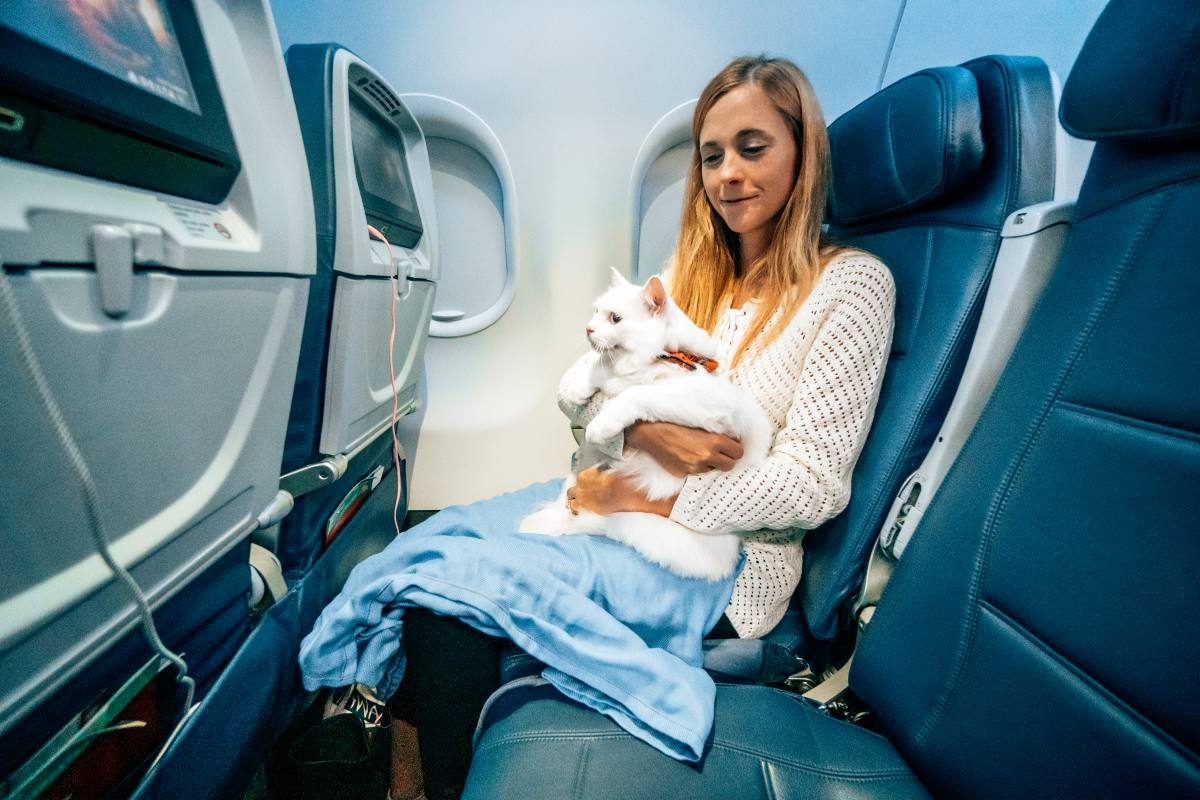 Flying while pregnant with a cat – also possible 😛

If you’re planning on having a baby or you’re already pregnant you might be worried about Zika. While there are some places in which there are several cases of babies affected by Zika virus, such as Puerto Rico at the moment, there are many spots that had Zika in the past, but no one took them off the list.

Do your research thoroughly before you cross off a destination. I was worried I had to go to Bali during my first trimester as there was no way I could cancel this trip. Upon further research, I realized that I really have not much to lose over my sleep. Bali has been on a Zika list forever because it has this type of mosquitoes, but there’s never been a case of any babies affected.

Many of you on Instagram asked me about Zika in Aruba, as I also went there at 18 weeks pregnant. Aruba is ranked at “Level 2, Practice Enhanced Precautions”. But, Aruba has NOT had a reported case of the virus since August of 2017 according to the CDC. 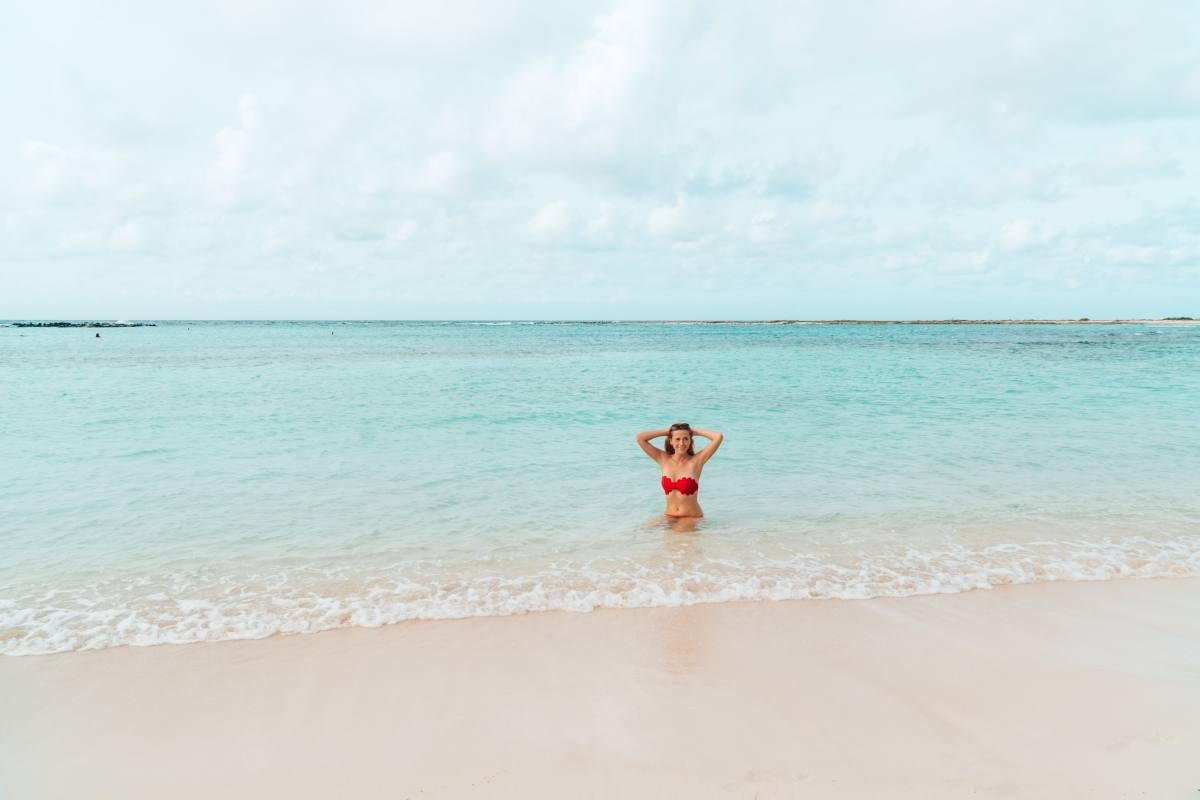 On top of that, even if a woman would get Zika, it doesn’t automatically mean that the baby would be affected. During both of my visits, I met many local women who recently had beautiful healthy babies, so that’s why I didn’t feel threatened.

Either way, find an alternative to DEET if you’re afraid of mosquitos. DEET is filled with chemicals that can actually be harmful to your baby.

When to Stop Traveling While Pregnant?

I think there’s no correct answer to this question, as it’s a very individual decision. Some people want to stop traveling mid-second trimester, others still go on babymoons in the third trimester and due to a busy schedule this is when I’m going for mine as well.

Each doctor will tell you different things and will have his own opinion, but medicine changes every year. Our mothers were being told to do things with babies that are now considering dangerous. Doctors in every country have different opinions as well (trust me on this, due to moving I went through a LOT of different doctors). You can access all the latest studies for yourself and decide what’s good for you and what isn’t. 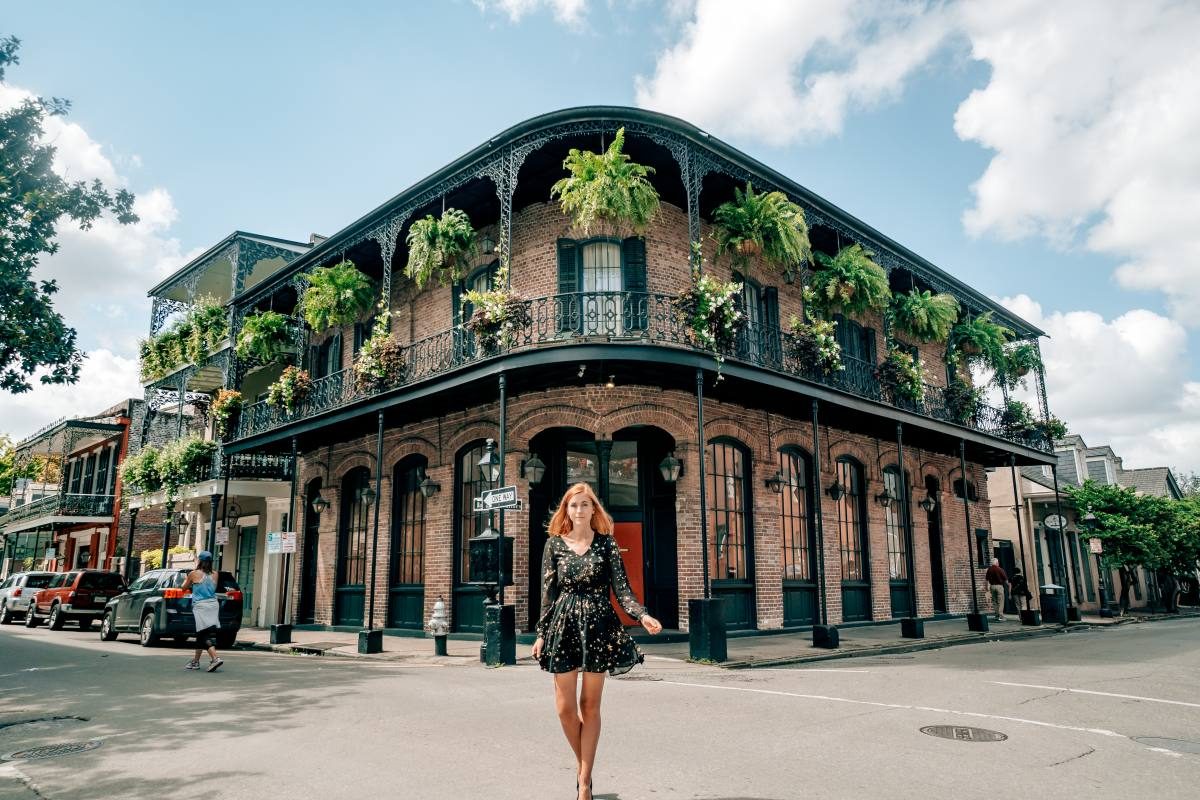 You might be curious about vaccinations requirements when traveling to certain countries, but truth to be told I’m probably the worst person to ask. Simply because due to my psoriasis and medicines I’m taking I can’t really be vaccinated for much. I could, but I might get an opposite reaction and it won’t work anyway, so you should probably ask someone without an autoimmune disease.

In terms of health/travel insurance, each provided will give you different answers. Most insurance companies will cover medical emergencies, but if the baby is born prematurely the birth is not covered. Remember to indicate that you’re pregnant when you buy your policy, otherwise, no complications might be covered at all! 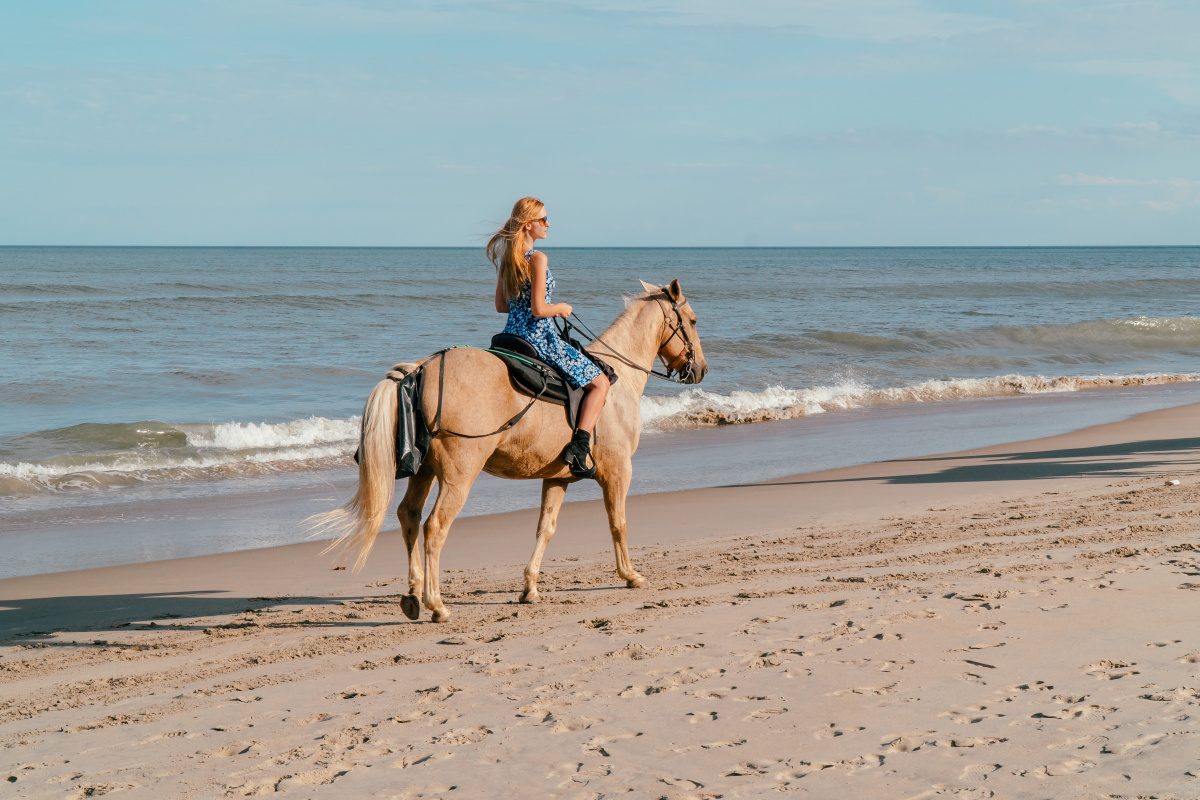 I was totally fine on a short horse ride as an experienced rider.

Traveling in 1st Trimester of Pregnancy

I was absolutely exhausted in the first trimester. While I haven’t had any morning sickness, I would have seriously swapped my rhinitis for it any day.

Wait, what’s pregnancy rhinitis? It’s nasal congestion that lasts for six or more weeks and affects between 18 and 42 percent of women. From the very beginning, I’ve been suffering from very severe rhinitis. It normally happens to women occasionally and passed 20 weeks, but in my case, it occurred daily, probably my deviated septum that requires an operation wasn’t helping either.

It basically means that for half a day, or occasionally even an entire day, and night I have my nose stuffed so much that it hurts, and I couldn’t breathe and could only sleep half-sitting. Even drinking hurt and I couldn’t hear much as my ears were also clogged. There’s no remedy for it, so as the pregnancy progressed I became more used to it.

Rhinitis combined with general tiredness and painful everything made me cancel a trip to Mexico at 8 weeks because I wouldn’t have made it. However, when I went to Bali at 11 weeks I suddenly started feeling fantastic. I was able to go out late at night, run around, and teach my course for hours every day.

Then at 13 weeks I suddenly got nauseous for a week, which was particularly annoying as it happened during a conference I was speaking at. 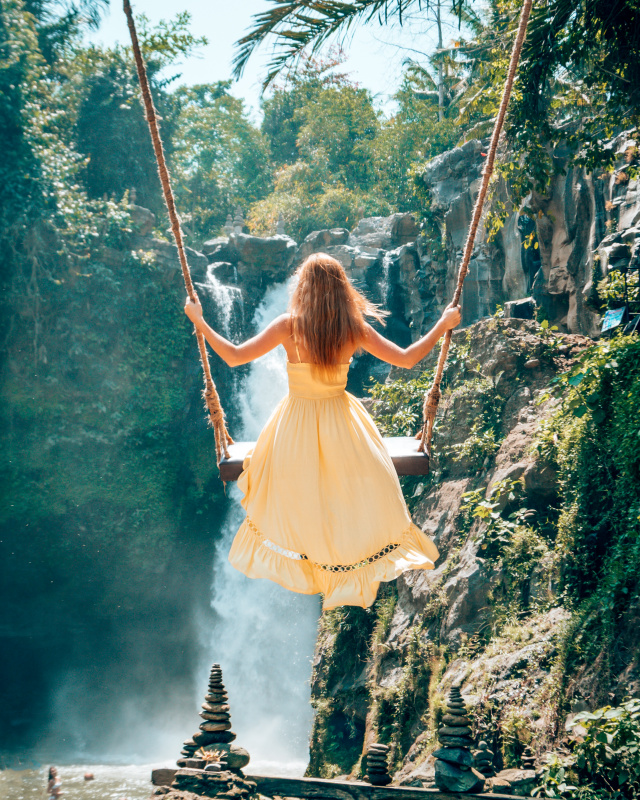 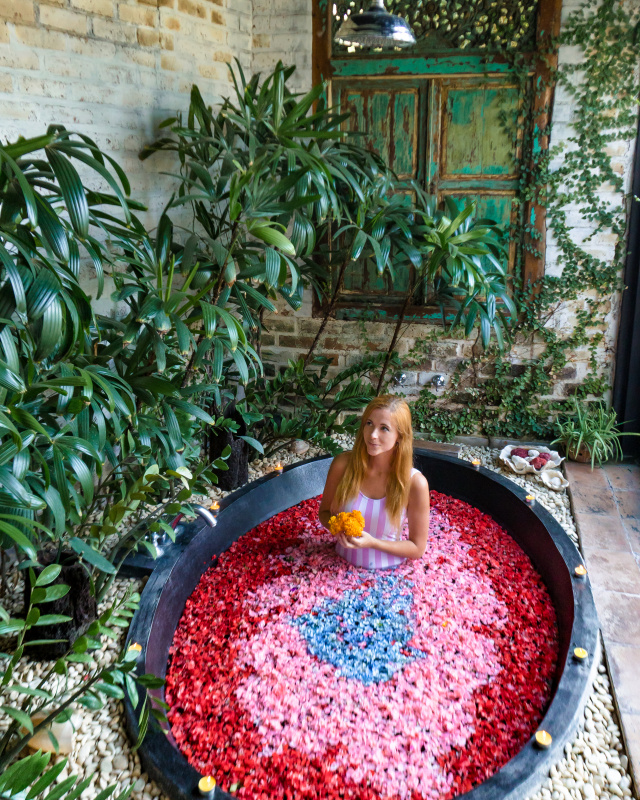 Traveling in 2nd Trimester of Pregnancy

In my case, I wasn’t showing at all until 20 weeks. Around 20 weeks I was able to see that I’m pregnant, but no stranger could notice anything apparently.

I did a lot of solo trips during my second trimester, as I didn’t want to cancel my work projects. At 15 weeks I went to New Orleans, which looking back was definitely not a great place to go pregnant due to my sensitive smell and the fact that I couldn’t enjoy the joyful nightlife.

At 18 weeks I traveled to Aruba, also without any issues (apart from a donkey breaking my camera). Obviously, some days I felt better than others, but overall I experienced no problems at all. I drove myself around the island, hiked around and sunbathe.

Then at 26 weeks we went to Poland for Christmas and the only thing I felt was the cabbage (a typical ingredient of Polish Christmas dishes) was making me sick, so we had to restructure the dinner slightly.

All of these trips were made between moving from California to Texas in the first trimester and from Texas to Italy in the second trimester. 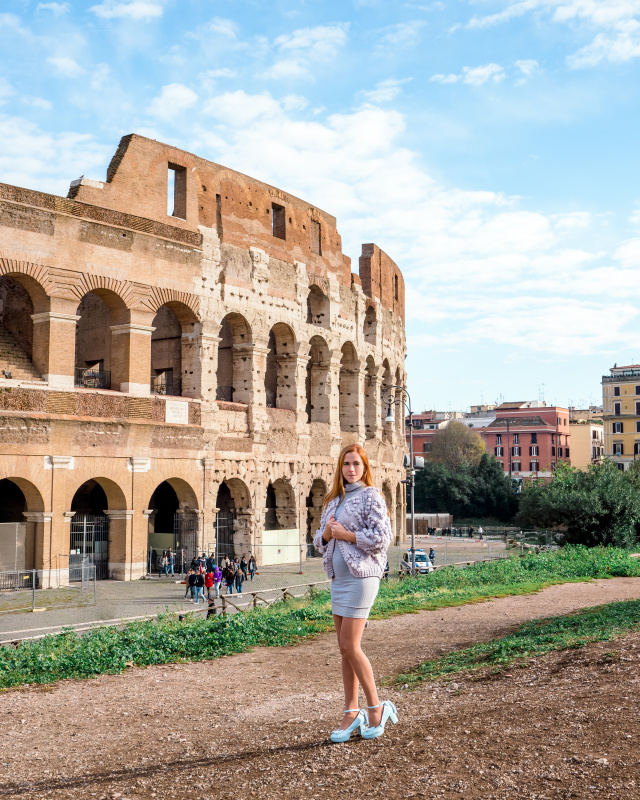 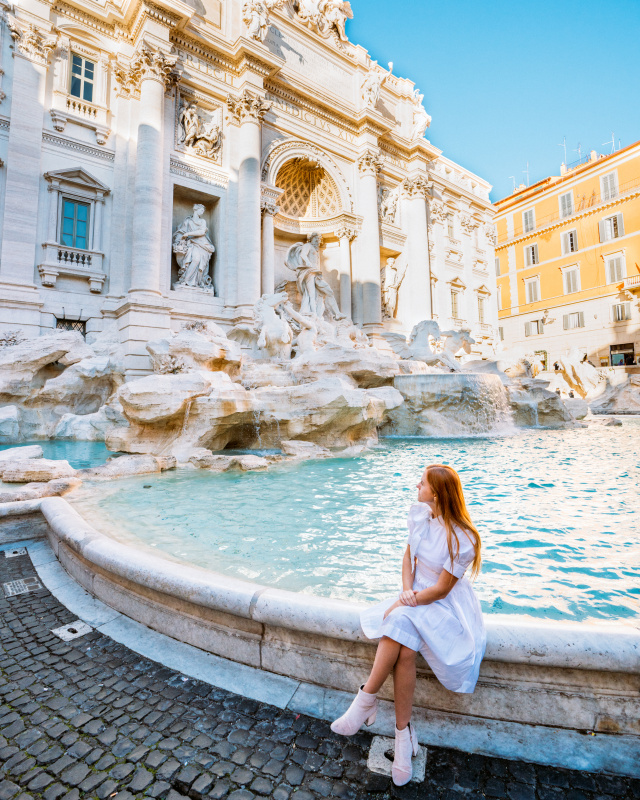 What Travels I Wouldn’t Recommend Doing When You’re Pregnant?

There isn’t much I wouldn’t recommend, but I’d pick destinations in which you wouldn’t be sad skipping certain activities. You won’t be able to do all the adrenaline-pumping activities such as ziplining, cliff jumping, or scuba diving so keep this in mind.

Personally, I probably wouldn’t do a safari when pregnant simply because it requires spending long hours in a car. Safari trips are exhausting on its own and with a constant urge to pee you’d be miserable. 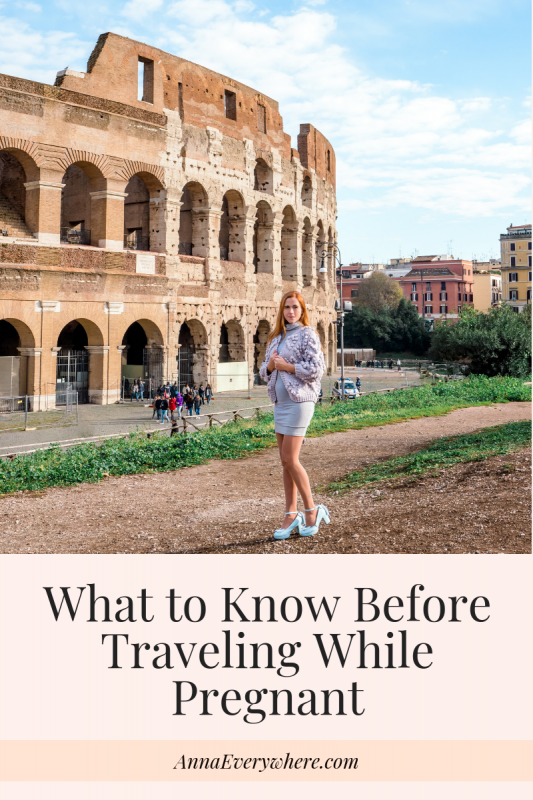 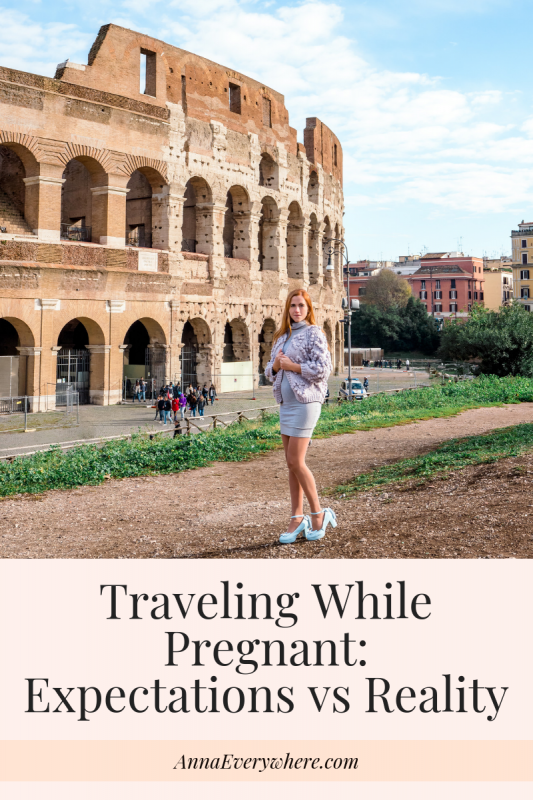 Do you have any other questions about traveling while pregnant?

Hello Im travelling to Bali in 2 weeks im still in my first trimester, what are some things i can still do and things to avoid i see you still dd the flower baths i wasnt sure if they were safe due to the oils( read somewhere else) everything you read online makes me stressed about it.

Don't stress, just relax :-) Get lots of massages, they're dirt cheap in Bali. If you're worried about oils you could ask for them not to put any, I actually did the flower bath on my own in our villa (AKA no one set it up, they just brought flowers), so I didn't have any oils in it. I'd probably avoid monkey forest - the chance of getting bitted is small, but I skipped it that time, but frankly, they got rid of most monkeys when they stopped selling food so it's not worth it anyway ;-) Otherwise, I didn't avoid anything - swings are fine, hiking to waterfalls is fine, food is awesome.

28-32 weeks pregnant shouldn't be allowed to travel. My wife is currently 25 weeks and we were already advised by her OB not to travel. Thanks for sharing your pregnancy experience. Well done!

And why not when it's perfectly safe? Medically it makes no sense unless there are complications which I assume your wife has, hence why the OB advised her not to travel. Here's a link to the American Pregnancy Association: https://americanpregnancy.org/pregnancy-health/traveling-during-pregnancy/

It was good to read it. Next week i go to Bali while pregnant and i was freaking out reading internet comments. Your text made me calmer. Thanks

Don't worry! Internet moms love to scare each other. At some point I stopped reading forums because it would only make me stressed while everything was fine :)

Congratulations on your pregnancy. I enjoyed reading your story. It's entertaining and informative at the same time. I now have an idea for traveling when I will get pregnant. :)

Baby Beds for Families on the Go