Should I go to college or travel? Should I spend money on school or learn some skills online? I get many emails from younger readers asking me these questions and I always say the same thing – you don’t have to make a choice between a school and traveling.

As you can read on my about page I studied at many good universities and obtained my degrees while traveling. Being in school doesn’t mean you cannot travel in the meantime, it’s actually easier because as a student you get a LOT of discounts.

The interesting part is that when an article about me came out in a Polish newspaper people accused me of giving them false information because my study timeline didn’t make sense to them. Here’s why.

I actually obtained my undergraduate degree in 1,5 year. I was being paid to study, traveled during breaks, and did an internship.

‘You can’t do this at my school’

‘Your program must have been easier’

If you’re looking for an answer to any of the questions below, continue reading.

Why Did I Want to Graduate Early?

When I started my program graduating early wasn’t my plan. I enjoyed school and while I’ve been a bit of a nerd, I still partied sometimes. I wanted to take my time, learn as much as I can, maybe even take a year abroad thanks to the Erasmus program offered in Europe.

However, I quickly realized that I could be much better off graduating early, traveling and getting work experience, and then studying in another country for my Master’s degree.

My decision was partially based on financial benefits, as in Poland there was no way I could work full-time while studying. Back then working online from home wasn’t really a thing either.

In the UK during my MA degree later, I had no issues fitting my work schedule with my studies as I had classes 3 times a week during lunchtime.

However, in Poland, there were way more classes and most of them were spread out throughout the day.

While I managed to squeeze an internship during the second semester, a regular side job in hospitality wouldn’t have been possible.

I wanted to make some money to be fully independent, hence the decision of early graduation. 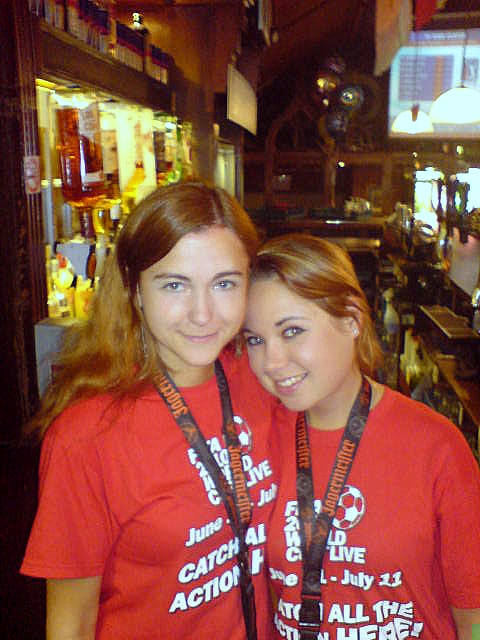 Bartending in London during my Master’s degree.

How Did I Get Paid to Study?

You’re probably wondering who gets paid to study. While unfortunately in the US most people need to take out a loan to pay a horrendous amount of money for college and living expenses (what ironically is causing current financial crisis), it works slightly differently in Eastern Europe.

A certain amount of spots at the public university is free to attend for those with the best SAT scores. Those who didn’t get a spot for free, can still attend the course and pay. 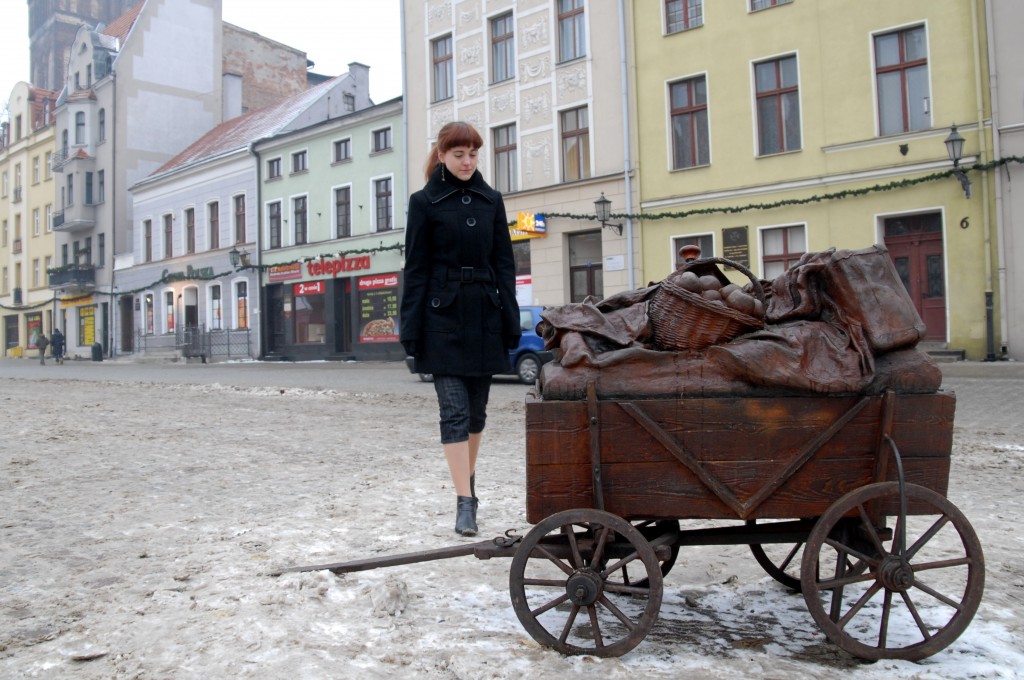 There are academic-based scholarships in Poland.

No banks will give you a loan for your college expenses, but thankfully you have scholarships. If your family doesn’t make enough money after you get into college, you can apply for a scholarship. The other type of scholarship is academic-based and it’s for those who obtain great results in the first year.

This is what I got, which basically meant that for the next year every month I was receiving money for just studying at the university. It paid off not to party too much for a year 😉 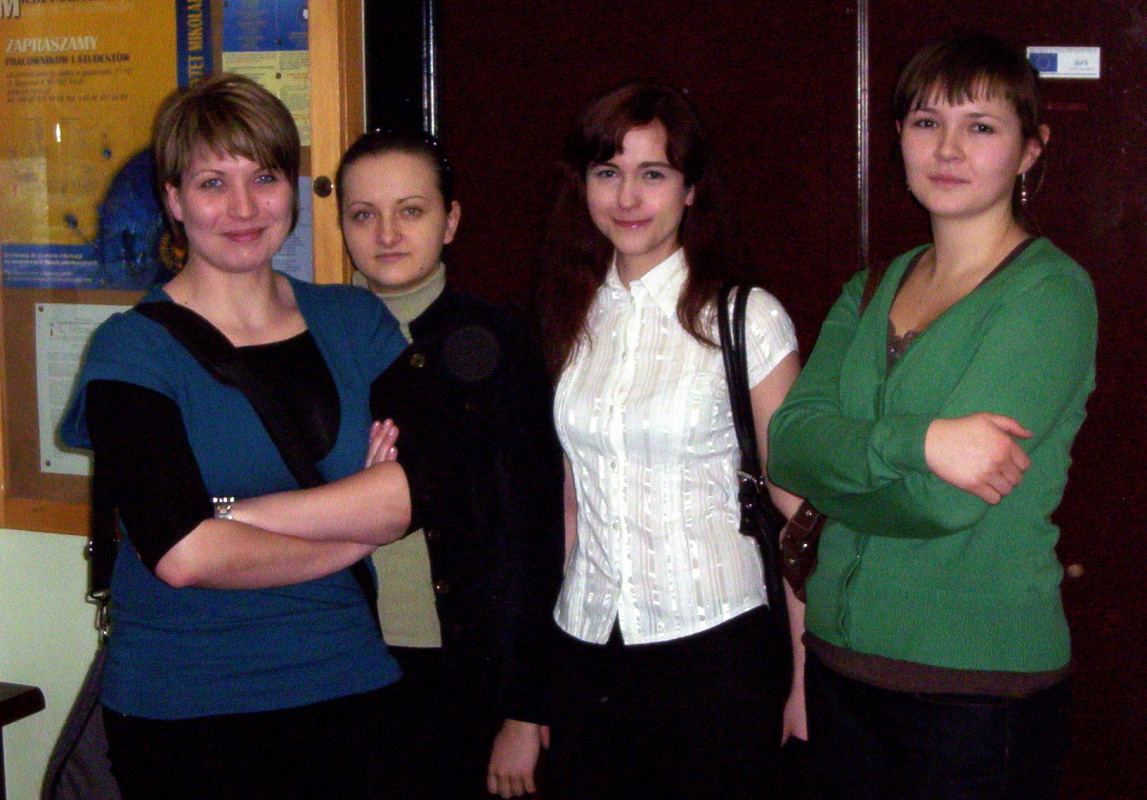 At my private graduation ceremony in March 2009.

How Did I Arrange My Early Graduation?

My college program in Poland was slightly ‘special’ which means that it was structured the American colleges work in terms of elective courses.  However, I still had to follow the same program requirements as regular students. That said, I think it’s WAY EASIER to obtain a college degree and/or graduate earlier in the US than it is in Europe. Why?

In the US you can take AP classes in high school and obtain college credit. In Europe, it’s not an option.

Summer semesters are still a novelty in Europe outside of the UK, so it’s not something I could do. While I could spend some money and take some summer courses in other countries which I did, they never counted towards my degree.

During my summer school in Florida.

In Eastern Europe there’s also no such thing as essay-based classes. All my degree courses were exam-based and most of the time they were oral exams. On top of that, even for your undergraduate degree, you need to write the thesis and defend it later. You definitely need to study more in Poland than you do in the UK or US as I described in my other post.

Graduating so early wasn’t something other students did on a regular basis. I was, in fact, the first one. How did I go around prerequisites?

Some of my more advanced courses required some prerequisites and I had to beg professors to let me pass some courses earlier by doing all the coursework required in 2 weeks instead of a few months.

It wasn’t easy, and as an example, I can give you one exam that required basically memorizing a 1200-page long course book along with 3 elective books in a week – just to pass a prerequisite requirement. That said, if you’re determined it’s all manageable. 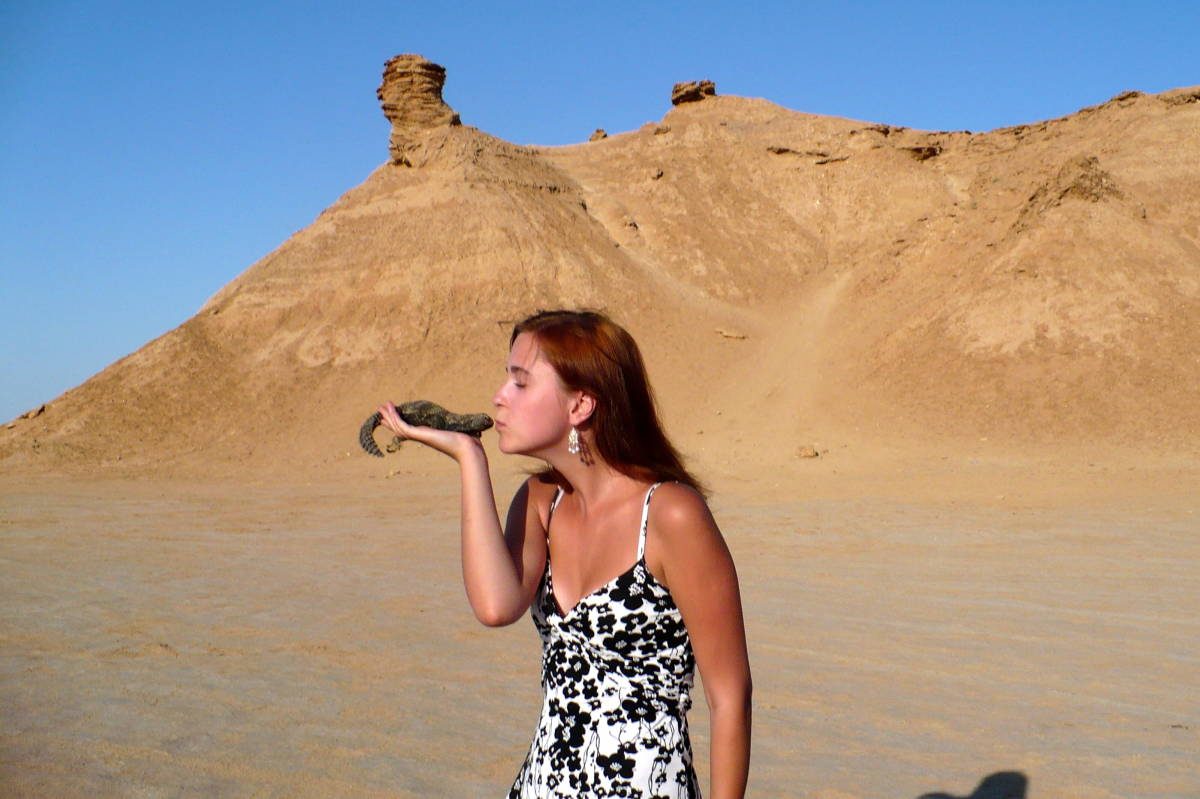 I went to Thailand, Israel, Tunisia, NYC and California after my early graduation.

Was Graduating Early Worth It After All?

You must be wondering if you should try to graduate early now. I think it’s a very individual decision and depends on your circumstances. If your motives are financial to avoid a huge student loan, then by all means – graduate from college earlier.

In my case, as fun as it was to take a half-year gap year and travel the world after graduation and before my Master’s degree in the UK, I experienced some unexpected issues with my situation.

The problem was that at the age of 20 (in Poland you graduate from high school at 19) I’ve already obtained an undergraduate degree. Many postgraduate schools didn’t even want to look at my graduate application, not because they weren’t impressed, but because they thought I was too young.

I didn’t understand it back then, but looking back I must say that I got way more out of my further degrees I did at 24 with a few years of work experience than my first Masters at 21. 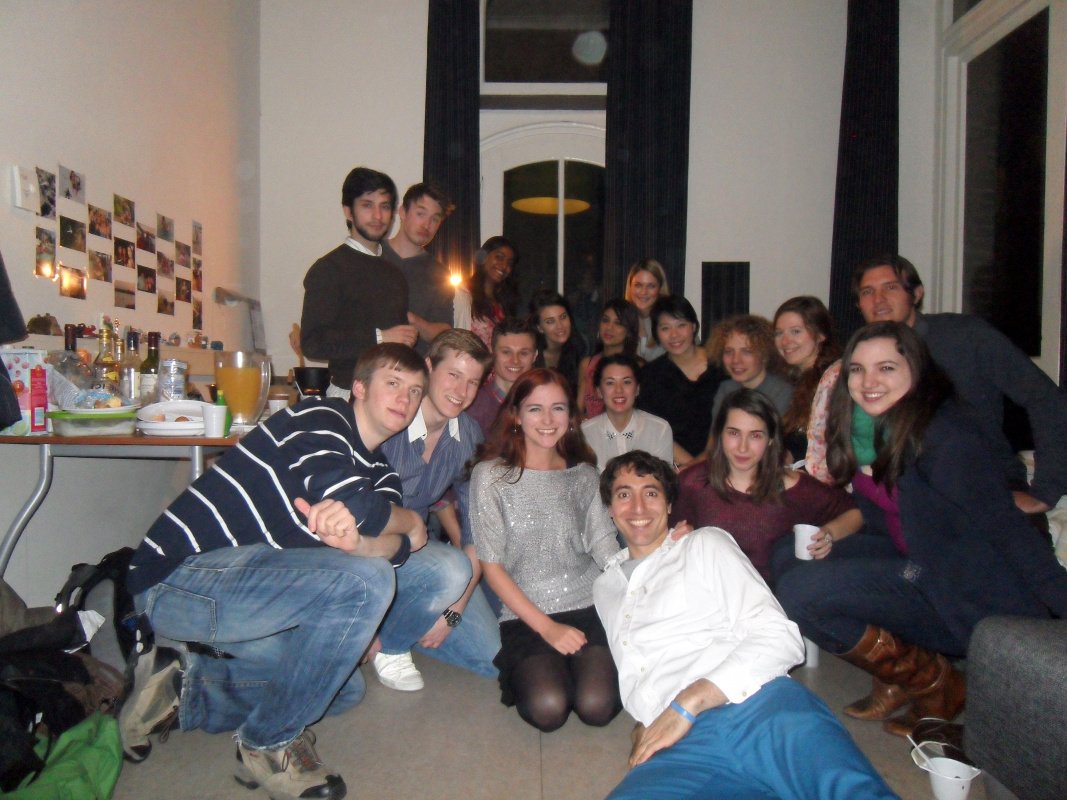 Do you have any additional questions about graduating from college in 2 years? Ask ahead! 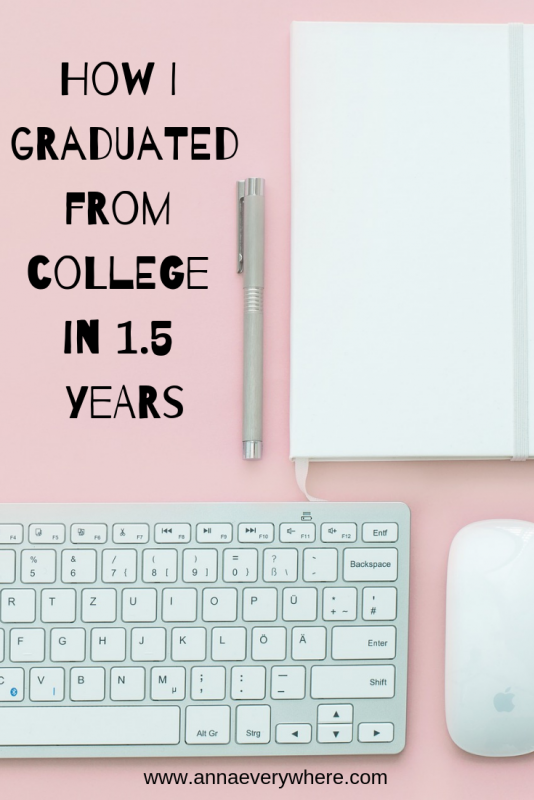 Loved your web page and your blog. I've been reading for a couple of days now, and it´s been really helpfull for me and wy wife. We live in Ecuador and we will be heading to live in Switzerland in the next couple of months. It will be easier for us, since she Swiss, but lived in Ecuador since birth.

I have a question for you: Me and my wife own 7 dogs and 2 cats, all neutered. We have rescued them since we got married, and we will try to bring all of them (very gradual) in this new stage. Is it difficult to find home (rent) in places outside Zurich?

Thank you for your time. AAG

You probably know this already, but you won't be able to bring all the animals in one go since you can only bring 2 per person. There are, however, services that specialize in the transportation and relocation of pets. Switzerland is very pet-friendly, but 7 dogs is a lot so I wouldn't be surprised if some landlords wouldn't allow it or asked for special fees, but eventually you should find something.

Hi, Anna. It was really inspiring!! Thank you so much for sharing your amazing experience. I reached this blog seeking the way to graduate early as you did, so there are some stuff that I'd like to clarify. Did your professor arrange prerequisite for you pleasantly? I mean, it's an extra work, right? Did you just describe that you wanted to travel as the reason to graduate early? Also, weren't there corporation works with other students e.g. experiments? Could you participate those works even though your progress was faster? My major is engineering so there must be many experiments.

To answer all your questions: my main reason to graduate early was to have all the documents ready to apply for my Master's in the UK. I could have applied before graduation, but then I would only be able to receive a conditional offer, but I wanted to be safe. I actually originally planned on graduating just two months early, but my thesis supervisor asked whether I would like to graduate even sooner since I had my thesis ready back in November.

I've had no experiments or group works, but I didn't study science. Professors arranged nothing really - it was me who kept asking to let me in for a class and their responses were usually: sure, you can but you need to pass this knowledge test to enter (all our exams were oral which makes it harder as it's not a test - I had to admit I had issues with one course and had to retake the exam 3 times because the professor decided he'll only let me skip the lecture if I knew 100% of everything including things that were mentioned in 1000ish pages book in one sentence, LOL).

Hello Anna! I must say first I am greatly inspired with your blog.. and i actually find your blog the easily best around here for young travelers.. I just wanted to know how the job of bartending is like? I am a girl of 18.. and I want to do some earning.. which i am going to try for the first time along with studying. Which one would you say between bartender and waitress is better?

I'd say in the US waitressing is surely better, because the tips are better. However, it really depends on the place as I was getting a bunch of tips at my bar. It all comes down to what do you prefer. I enjoyed bartending more as I could interact with customers more.

What do you mean?