Quito is the second highest capital in the world, after La Paz. Surrounded by volcanos, the colonial architecture of the city combined with some modern accents can definitely charm visitors. Sadly, most visitors don’t even consider visiting this beautiful city and treat it as a layover on the way to the Galapagos or Peru.

To be honest, I was guilty of this mindset as well and I treated Quito as a quick stop on the way to the Amazon. To my surprise, I had an amazing time and I’d rank Quito as no. 3 of the best Latin American capitals after Mexico City and Rio de Janeiro. What should you do when you visit Quito? Here are my top 5 things to do!

Best Fun Things To Do in Quito 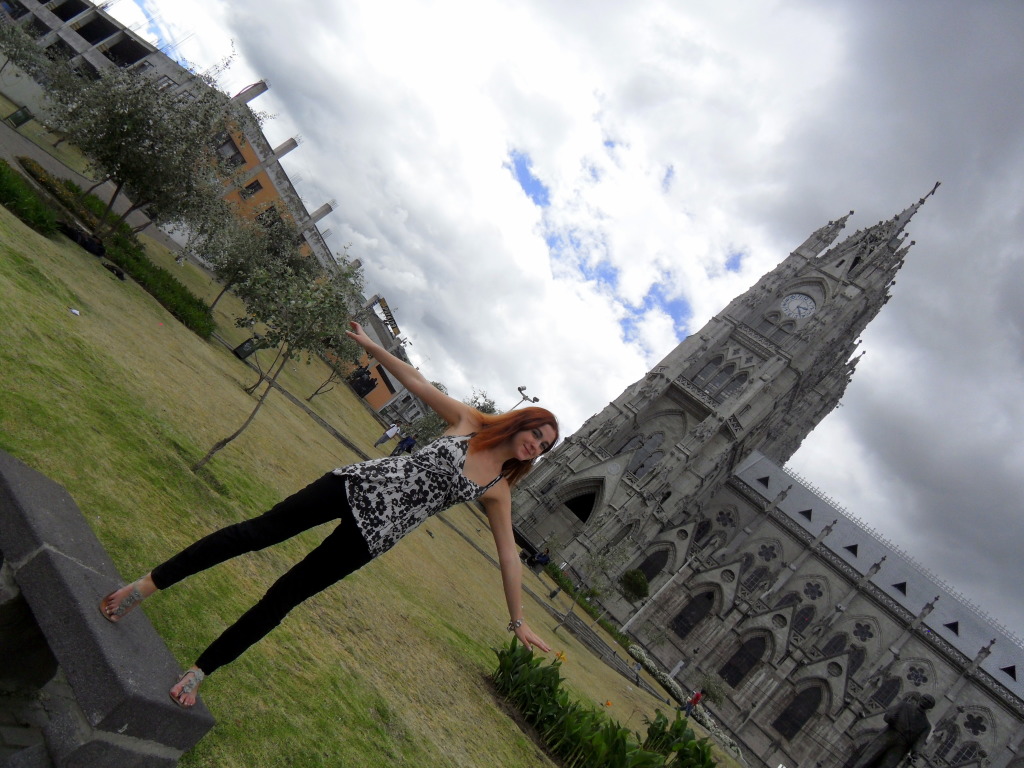 Visit the old town and climb the church

You can start by taking a stroll through Quito’s 16th century colonial old town, a UNESCO world heritage site. I’d recommend starting from Plaza de Independencia to see the marble monument celebrating Ecuador’s first declaration of independence against  the Spanish in 1809. Everyone will probably advise you to visit the baroque church of La Compañía de Jesús, but I’d say it’s not the best church to visit in Quito.

It might sound strange, especially coming from the mouth of an art historian (a long, long time ago I studied art history), but this church didn’t impress me. The columns on the facade seemed to be basically copied from Bernini’s artwork and the interior wasn’t very spectacular.

But if you’re not into architecture, but would still like to do something cool in the old town, you should head to the La Basilica Church.

Entering the church, I had no idea what I was getting myself into. I saw that the church had a real elevator so I was convinced we were just going to see some observation deck. The moment I got off the elevator I had to walk across a narrow wooden bridge directly over La Basilica’s interior arches.

Then I saw a ladder and for a person generally freaked out by ladders, it was already quite a challenge. However, the worst was yet to come. I had to climb some very steep stairs all the way up to an open-air platform only 2.25 x 2.25 meters. It’s very scary to even look around. But, if you’re not afraid then you’re treated to a breathtaking view of the entire city of Quito. 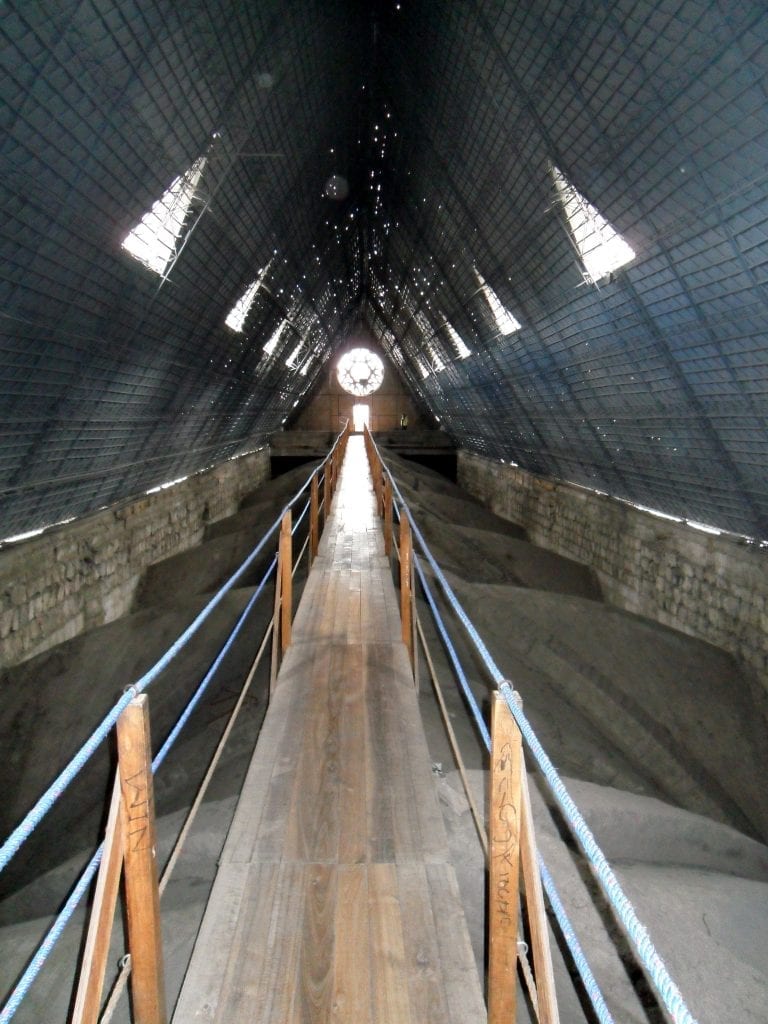 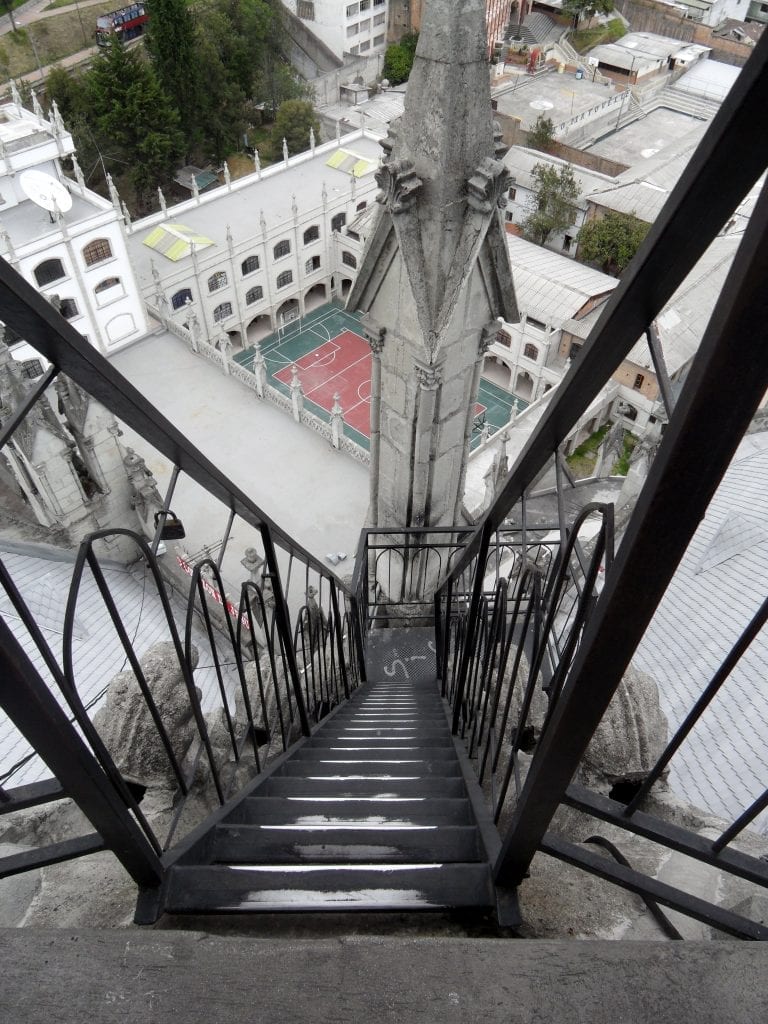 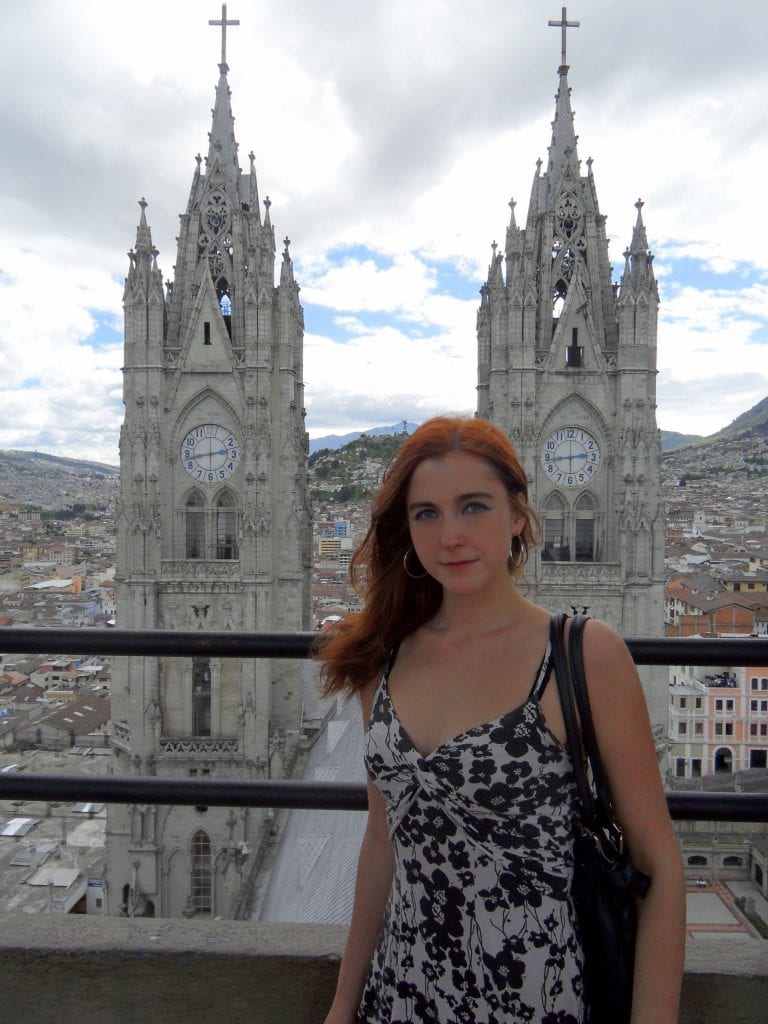 To get an idea of the city’s layout, it’s a good idea to head to one of the many viewpoints that offer panoramic views of Quito and the surrounding volcanoes. At the Mirador de Panecillo, you’ll be welcomed by a statue of the Virgin Mary looking like a Guardian Angel protecting the city.

Hint: don’t try to climb there on your own unless you’re a hardcore hiker. It’s quite a long walk and a taxi can take you there for less than $3. 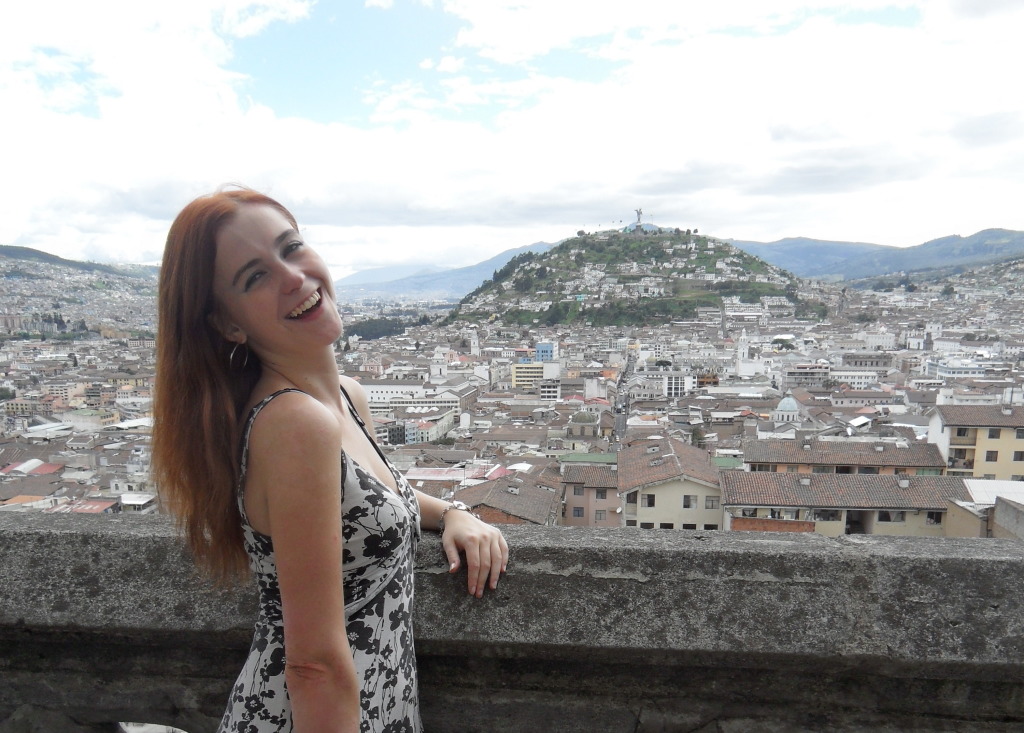 See the city from a teleferico

One of the most photographed tourist attractions of Quito is the view from a teleferico, or cable car, at Cruz Loma. You start at the base of Volcán Pichincha and are transported by cable car to the top of Cruz Loma at an altitude of 4,270 meters.

If you’re well acclimatized you can hike even higher to the volcano. Hint: try to go there as early as possible if you want to get a nice view of the city. During the day there are more clouds. 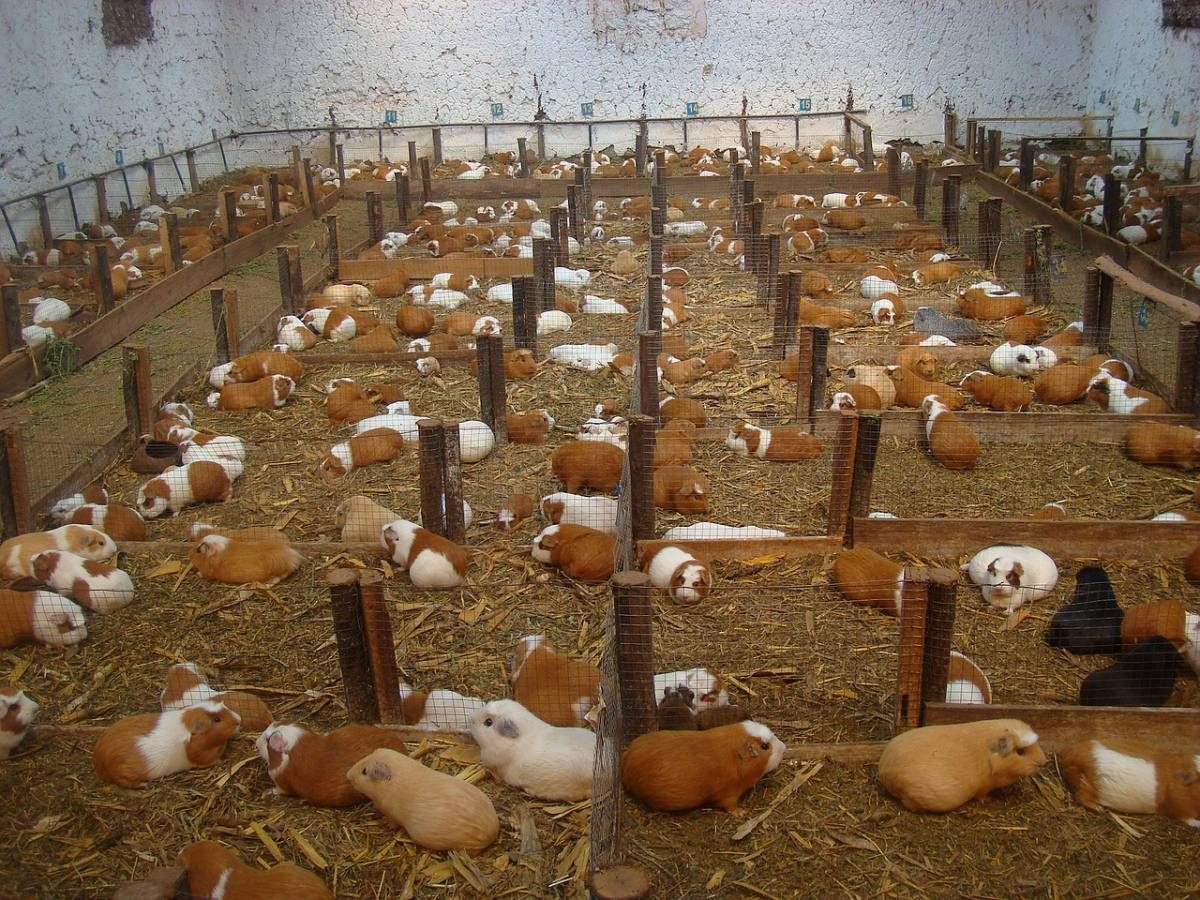 While in Ecuador, I decided to give some local dishes a try. Some of them turned out to be a mistake, because in spite of my fluent Spanish, I still had no idea what I had been served. The locals were constantly telling me the name of the dish and never answering my questions about what actually it is so they might as well have been speaking in Chinese.

A girl from my hostel ordered as I found out later, boiled llama’s stomach, while I got a rice ball stuffed with ‘something’. Food in Ecuador will always be a bit of a mystery for me and the only things you can be sure of are rice and beans, two of the basics of northern South American delicacies.

When visiting Peru or Ecuador, it’s impossible not to hear about roasted guinea pigs. Kept as pets in Europe, these little rodents are considered a national dish in both of these countries to the extent that fried guinea pig, aka cuy, is present on the Peruvian version of Last Supper in the cathedral in Cuzco. In Ecuador restaurants that serve cuys are quite hard to find, but it’s definitely an experience. If someone asks if I liked it, I’d say that chicken is better. 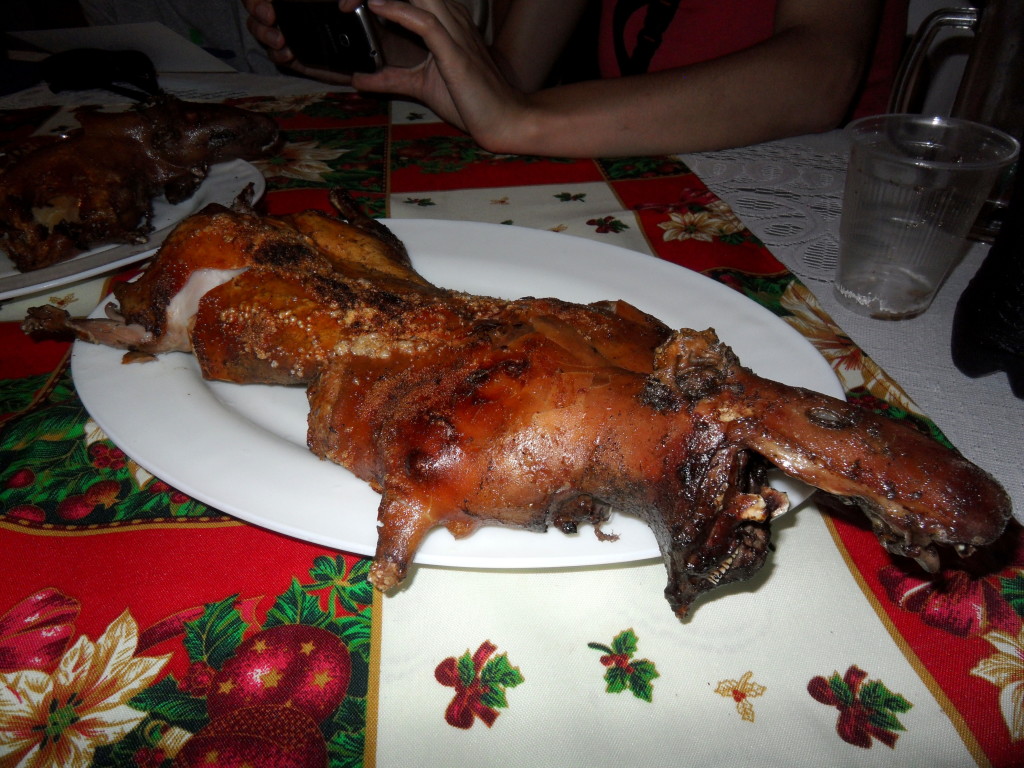 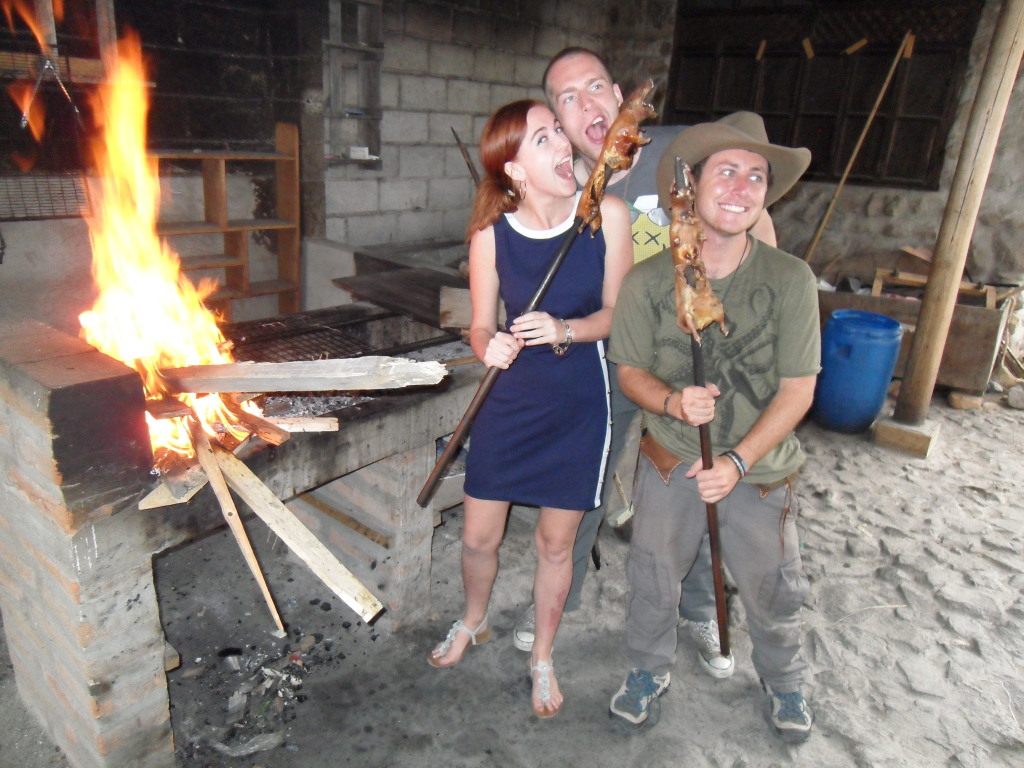 When I arrived at my hostel in Quito after a long and awful flight from London via Miami, I wanted to go to bed and rest. To my surprise, before even leaving my bags at the room I got a shot and a piece of cake. ‘More drinks are in the lobby!’ someone said to me right after my ‘arrival treat’.

Hostel Vibes was one of the best hostels I’ve ever stayed in! The owner, Santiago, was super helpful and everyone who was planning on staying just for a night or two ended up staying for a week or longer. Even if there was officially no space at the hostel Santiago was willing to help people who stayed there before.

When I came back from my trip to the Amazon jungle I had nowhere to sleep for 2 nights, because I forgot to make a reservation (Yes, sometimes I’m very unprepared!). I had to sleep in a hammock, but at least I had a place to stay – thanks to Vibes Hostel! The place was constantly organizing drinks at the bar and nights out in La Mariscal district. I even got to go on a party bus all the way up to the Mirador de Panecillo. 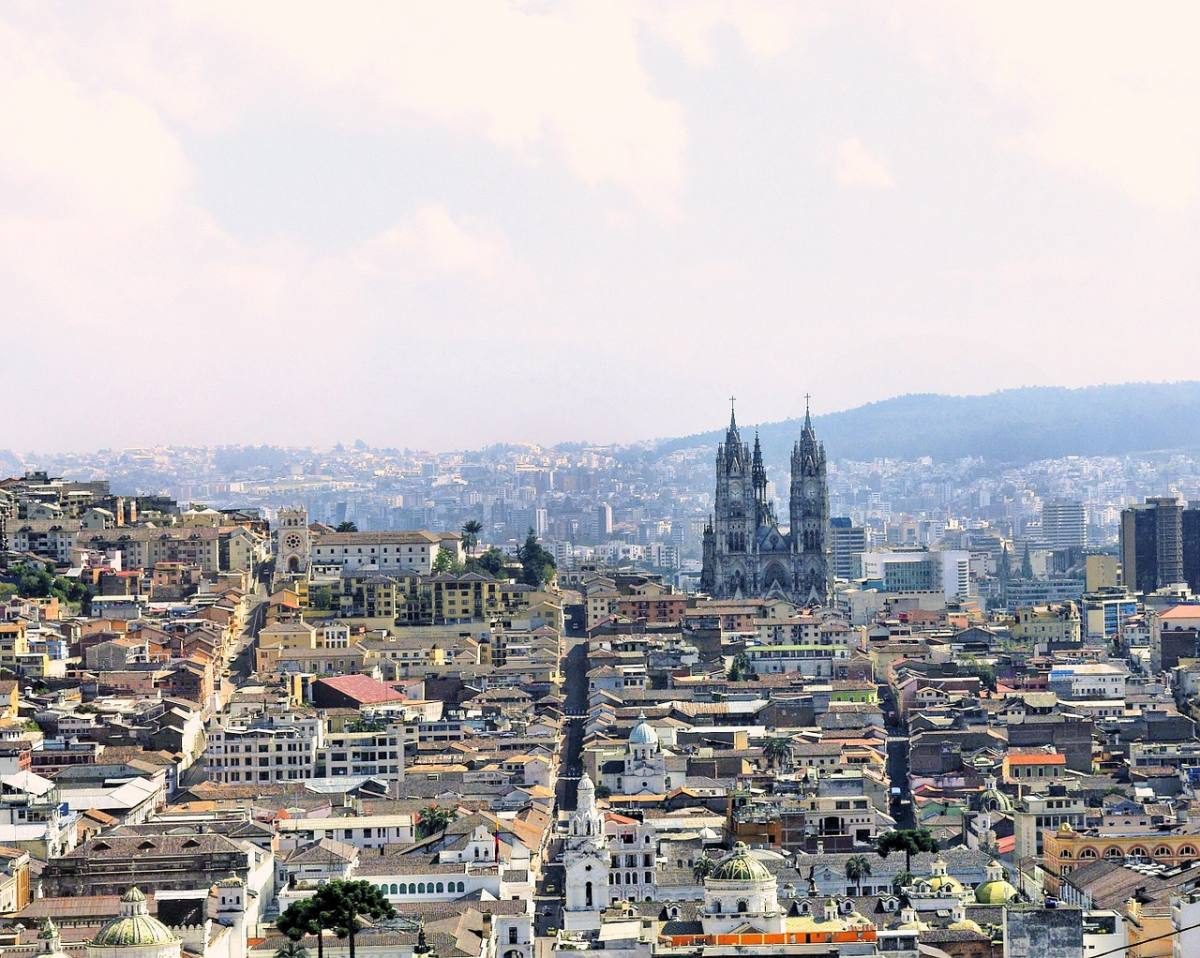 Have you been to Quito? Did you like it?

I recently went to Ecuador myself and you really convinced me to spend some time in Quito too! I planned my Amazon and Galapagos trip with Gulliver Expeditions(www.gulliver.com.ec) and was blown away! It's amazing there and it was very well planned out. However I had some free days in Quito before moving on and you gave me some pretty great ideas about what to do. I'm planning on going to Peru soon and am excited about what I'm gonna read in your blog about that amazing country! Thanks for sharing!!

Good, original and authentic recommendations on Quito's best things to do! Take that as a big compliment coming from a local too ;)

So, I own a company called Bucket Pass and we offer a more "touristy" digital bundled pass to the city's top attractions. I think your readers could also benefit on knowing what are those options as well.

so happy to hear a positive review of Quito! I'll be there in six weeks!

Beautiful photos you got here dear <3

Indeed! You should check Ecuador out :D