Giraffes sticking their heads through the windows for breakfast and reaching to your balcony… you might have seen these incredible photos on social media already. It’s the Giraffe Manor. When I first found out about it, way before Instagram was even popular, I was dying to go there. Sadly, during my visit to Kenya the hotel was closed for refurbishment.

A few years later, the Giraffe Manor still remained on my bucket list. While the price for the night more than tripled since the first time I tried to stay there, this time you had to book at least a year in advance, I made this visit happen for my honeymoon. 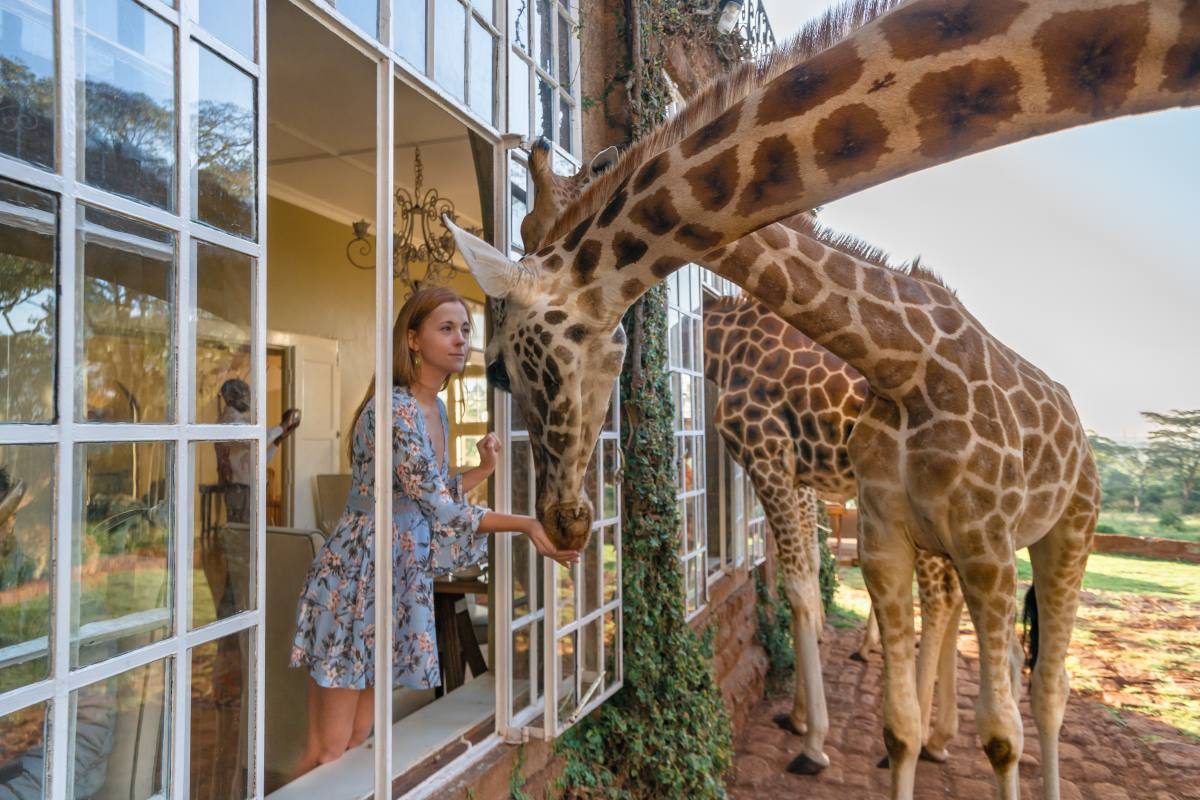 The most common question people asked me after my stay was:

Is the Giraffe Manor worth the money?

I get it. Quite often some places on our bucket lists don’t turn out to be as cool as we thought they were. Since neither Matt or I were sponsored to stay there I could write absolutely anything I wanted about this place.

I never write nice things about a hotel that wasn’t nice in reality even if I was sponsored to stay there, but I felt like some people might trust my opinion more if I stated the above. Fair enough.

I’m pleased to tell you that the Giraffe Manor is absolutely worth your time and money. It surely didn’t disappoint me, and I believe I can say the same thing for my husband.

The Giraffe Manor is part of The Safari Collection hotel group that owns a few luxury resorts around Kenya. While the Manor is a luxury hotel, it’s surely not your usual resort.

You won’t find a fitness center or a swimming pool there. It’s a restored 1930s mansion that’s still family-owned, despite being part of the hotel group. Each room at the main house I stayed at is absolutely gorgeous (peeked into other ones). 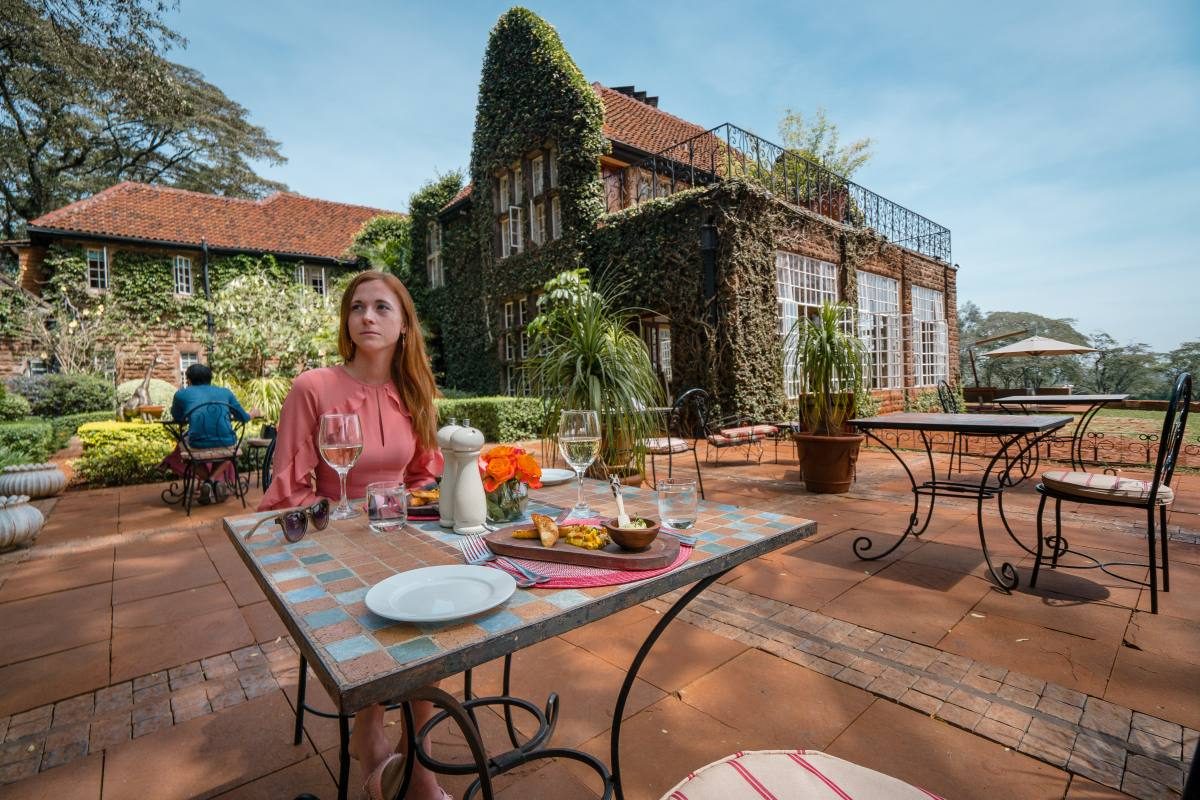 What’s included in your stay?

Absolutely everything. From dining and cocktails, through laundry services, wifi to airport pick-up and drop-off. Some of you might be scared off by the price, but all these things alone would cost a bunch elsewhere.

All meals at the Giraffe Manor were exceptional. You can have a choice of eating with other guests or have a more private set-up. During my visit, everyone opted for a romantic set-up, which worked for them as there weren’t any guests with kids at the time.

However, if you’re coming for a couples getaway or honeymoon, keep in mind that kids might be running around as most of them obviously love the giraffes. 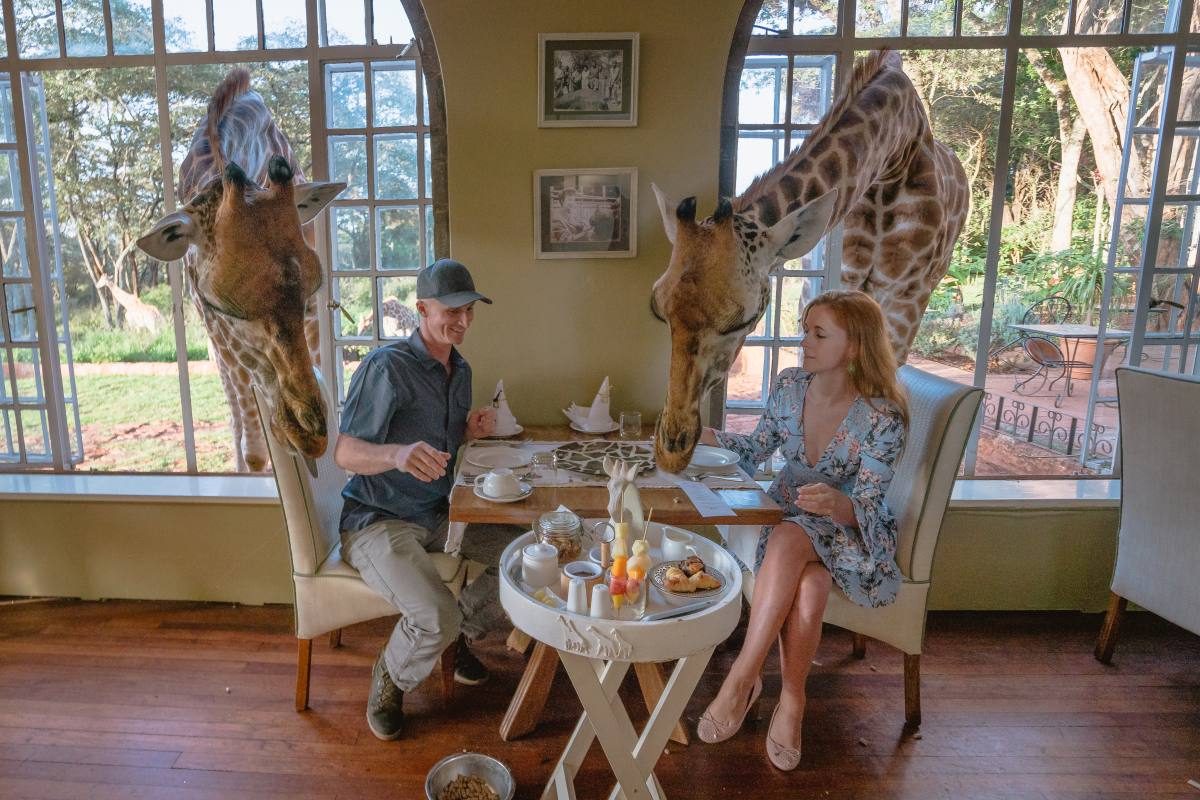 The Giraffe Manor is home to Rothschild Giraffes, not the same ones that you can see in a local zoo or a safari. They’re one of the four types of giraffes and can be distinguished by their white socks.

They’re completely free to do whatever they want, whenever they want since this place isn’t a petting zoo. The giraffes are used to human interactions, but don’t be fooled – they aren’t all friendly.

The staff will be with you the entire time and tell you do’s and dont’s, because some of your new tall friends can headbutt and send you to the hospital if they like. 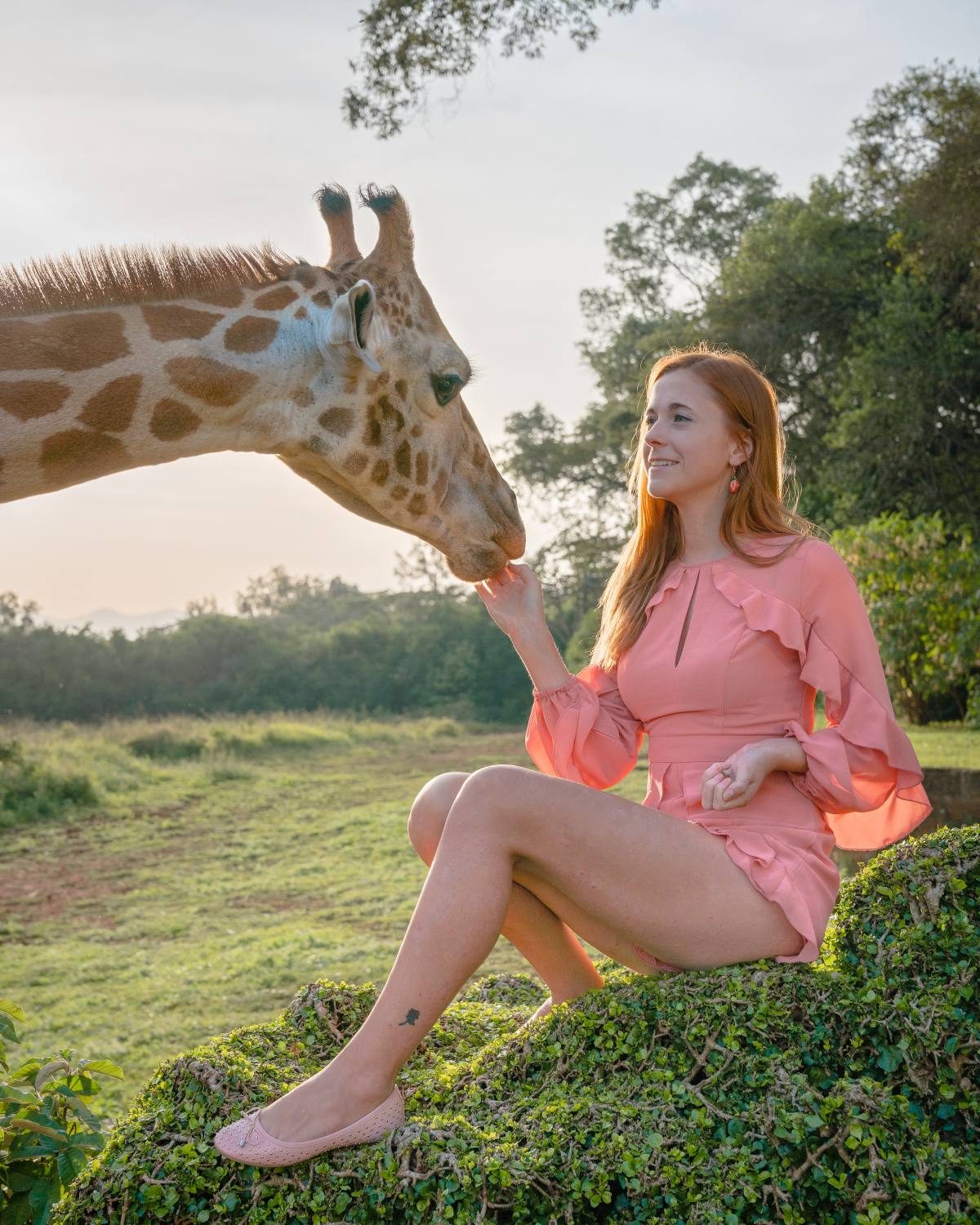 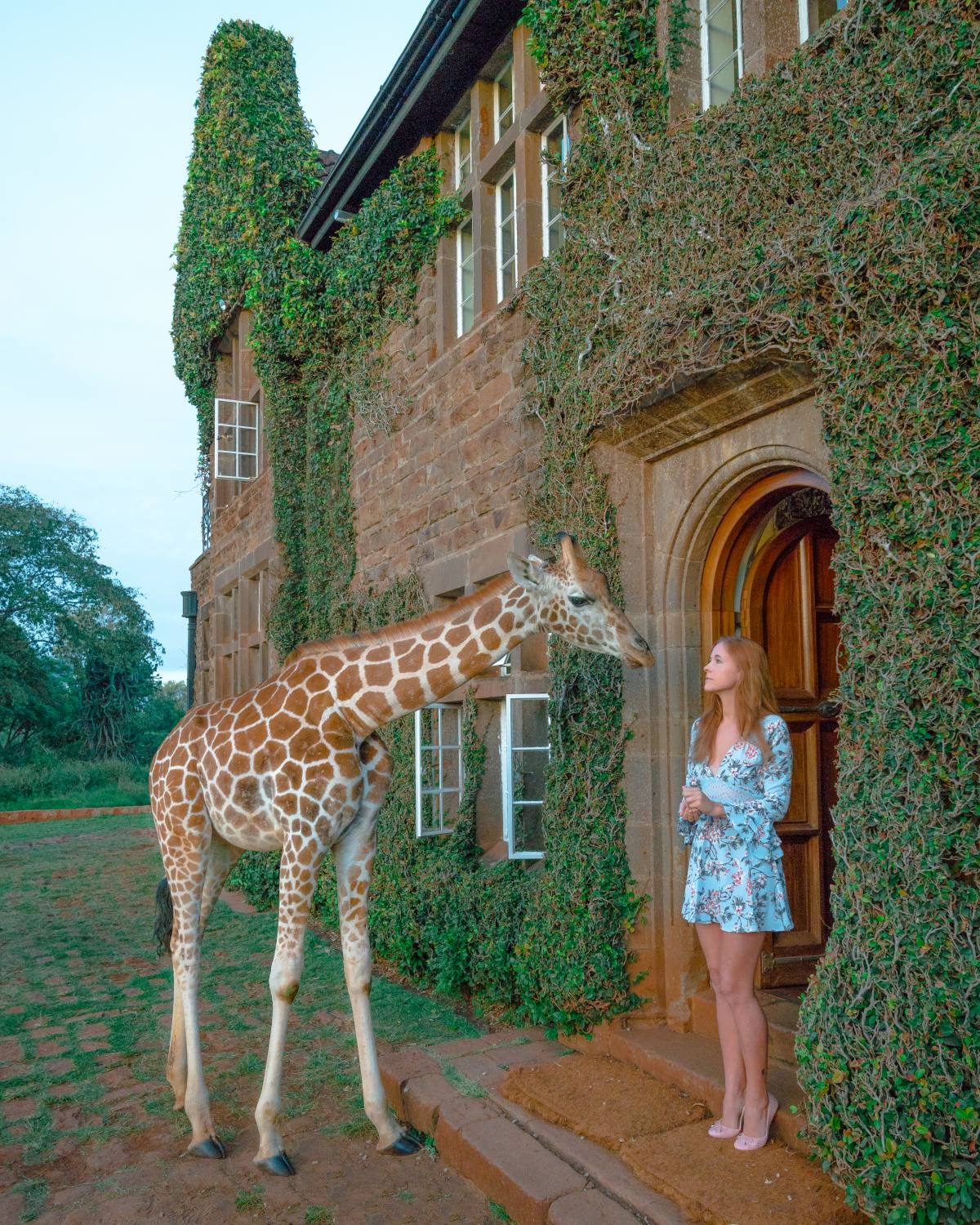 Apart from giraffes, the manor is home to a sounder of warthogs, better known as Pumbas from the Lion King. I’ve seen warthogs before in Zimbabwe and South Africa, but always from afar as they’re cautious with safari vehicles and humans. Not these guys though. They walked all the way to the window and doors and I was able to admire them closely.

While ugly to some people, I found them ridiculously cute. They kneel down to eat the grass or leftover molasses snacks but run with their tails up. 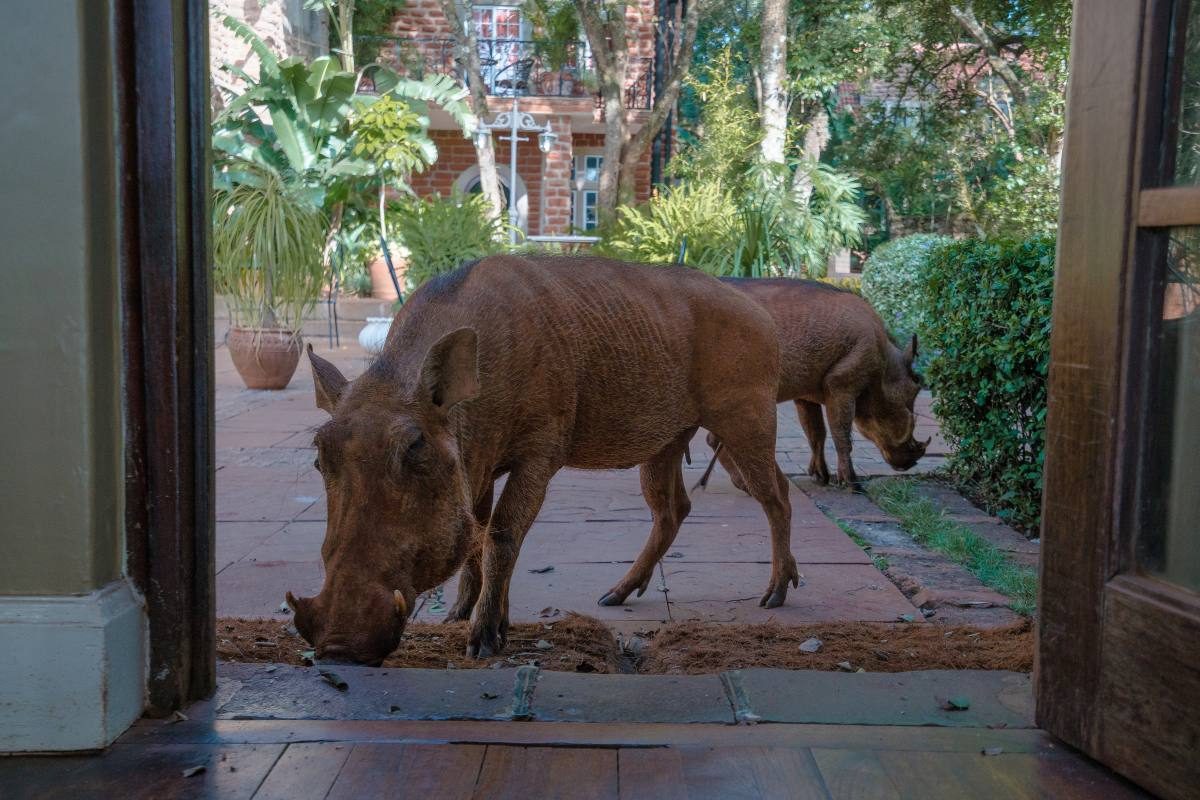 My Day at the Giraffe Manor

Between our arrival time around 11 AM and early afternoon, we actually did not see the giraffes. Instead, we found a jar in our room labeled ‘Don’t eat’, which turned out to be molasses snacks prepared for giraffes.

Since the Giraffe Center is located nearby (you can see it from the hotel), the tall guys are hanging out there until the place closes at 5 PM. I guess if I was a giraffe, I’d be where the snacks are too.

While we waited for the giraffes a delicious 3-course lunch was served to us outside and we enjoyed the downstairs lounge with an open bar, books, and giraffe-shaped chess set. 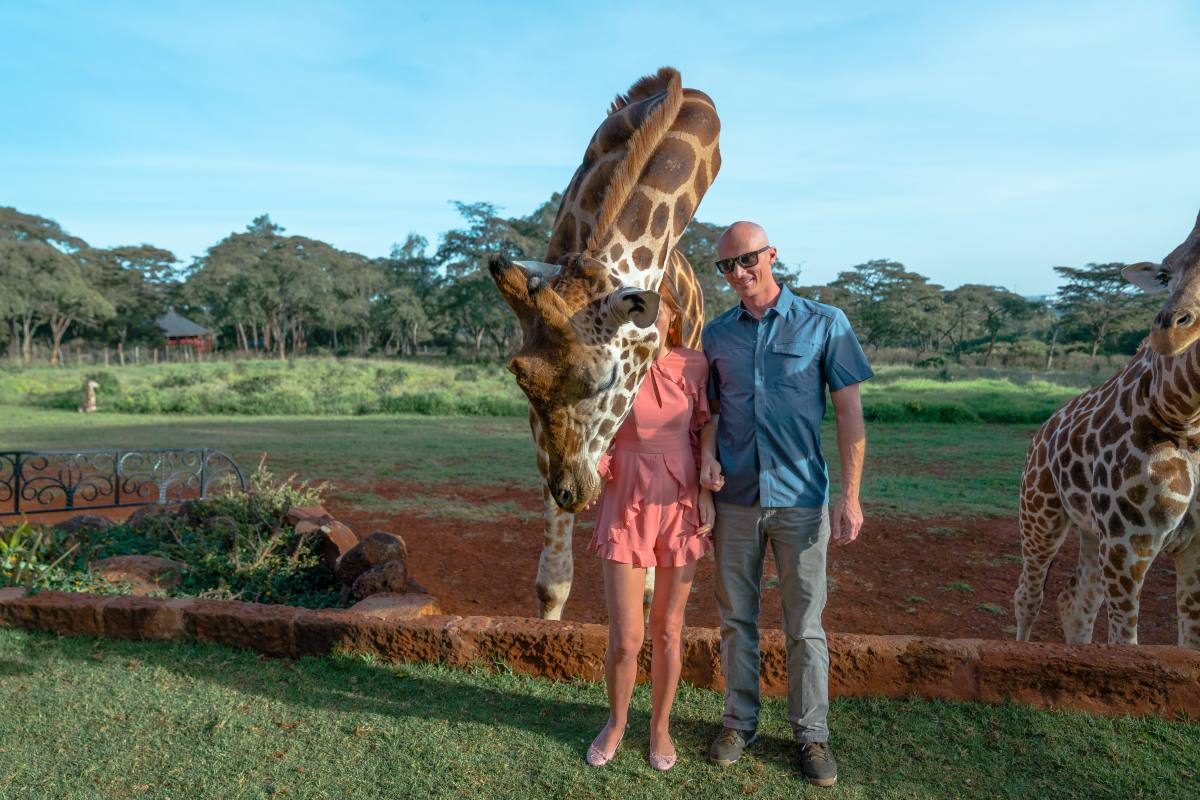 Right before 5 PM the guests are invited to the front of the house for an afternoon tea. We barely had time to eat our scones and drink the actual tea, as the hungry giraffes approached the building.

They were surely expecting us to feed them, ready to eat from our hands and give us very slimy kisses.

While giraffe’s saliva is antiseptic, I passed on the kiss. Once we ran out of snacks, the giraffes retired for the night and we were ready for dinner. 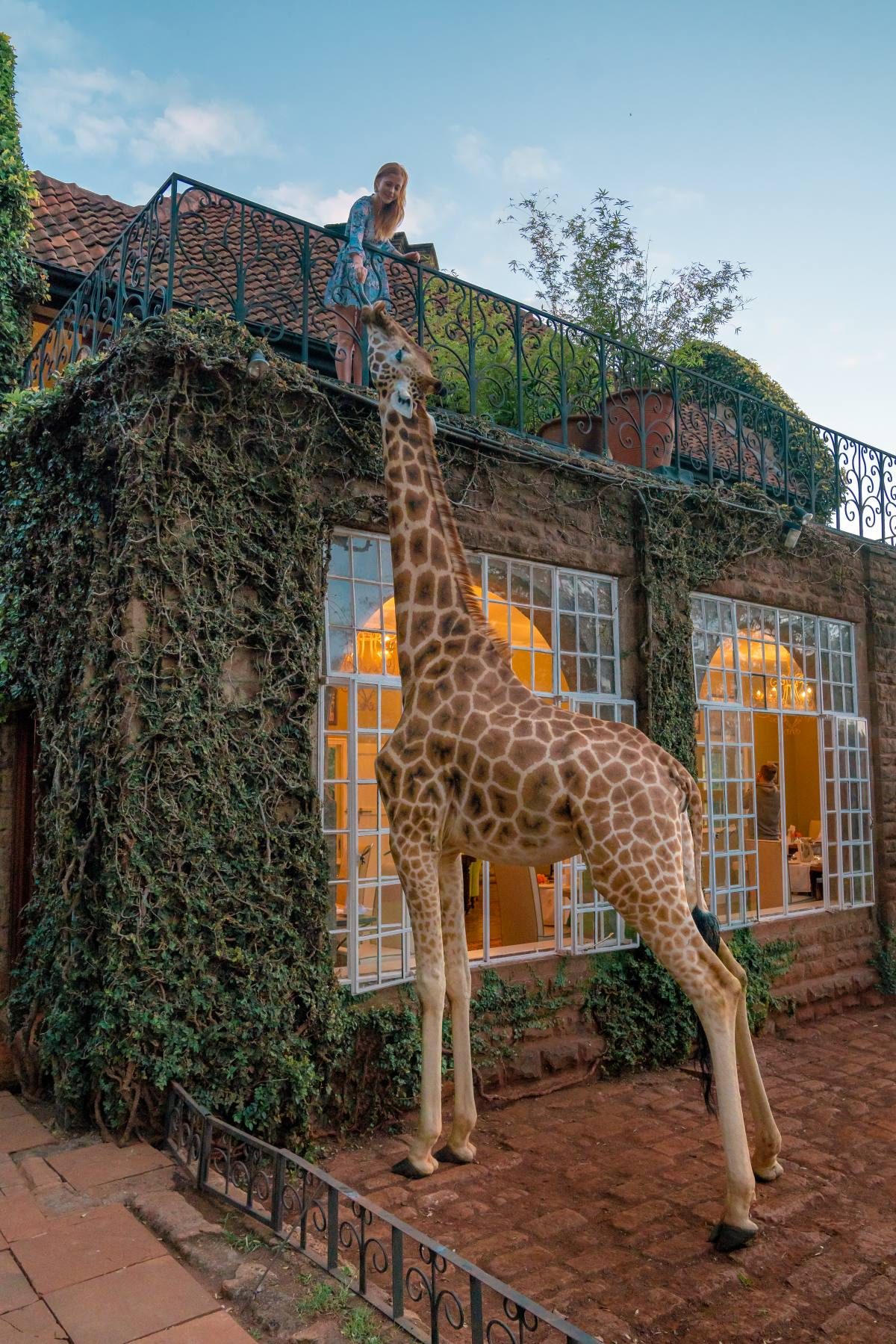 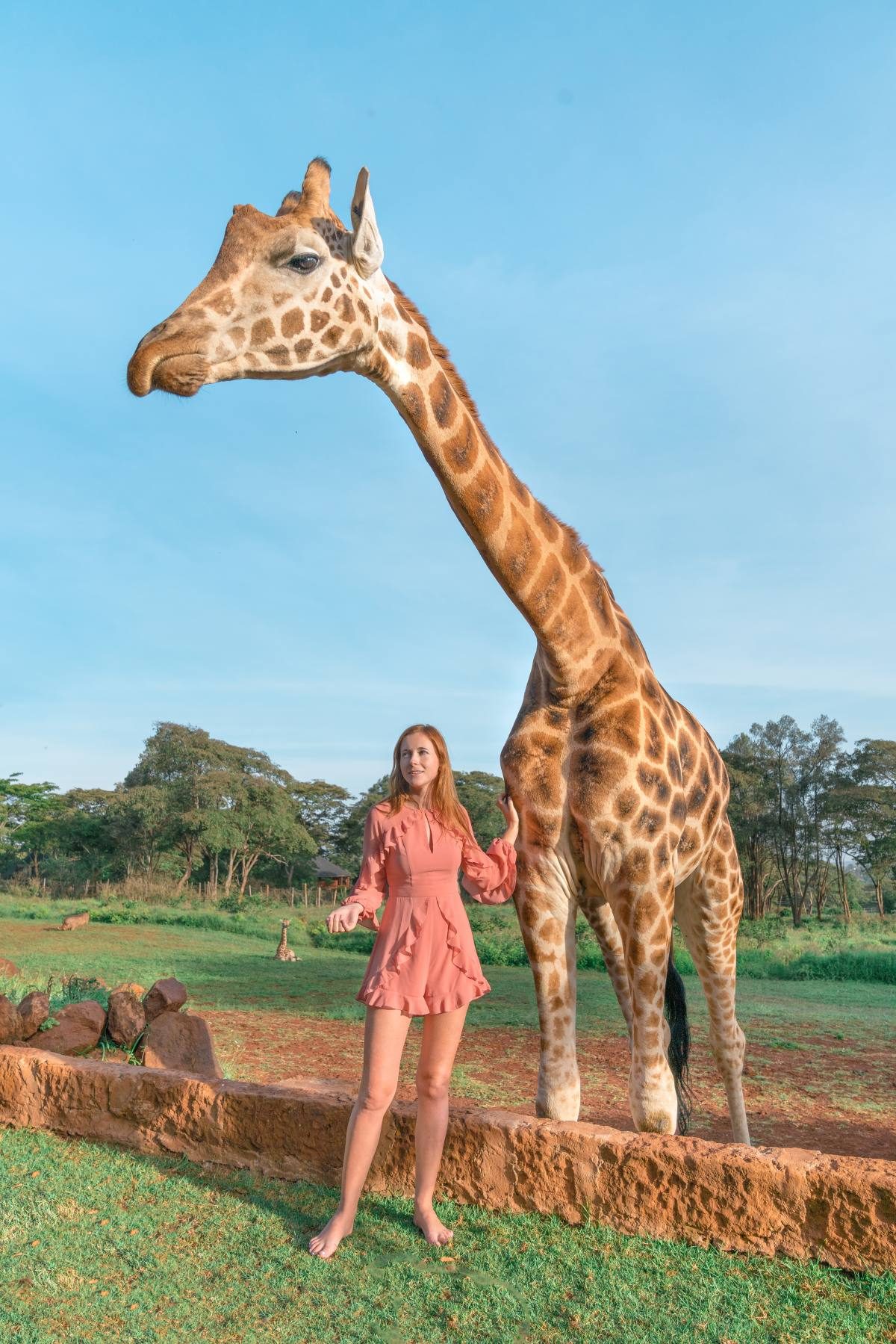 Around 5 AM, one greedy giraffe stuck his head to our balcony begging for food. Once the sun is completely up, all the giraffes were ready for breakfast so all guests gathered in the dining room to share the meals.

Sticking their heads through open windows, giraffes quickly cleaned up their plates. Hungry warthogs followed around, eating leftovers from the grass. The whole scene was definitely magical!

As fantastic this experience was, don’t do this at home. Giraffes make a horrible mess… 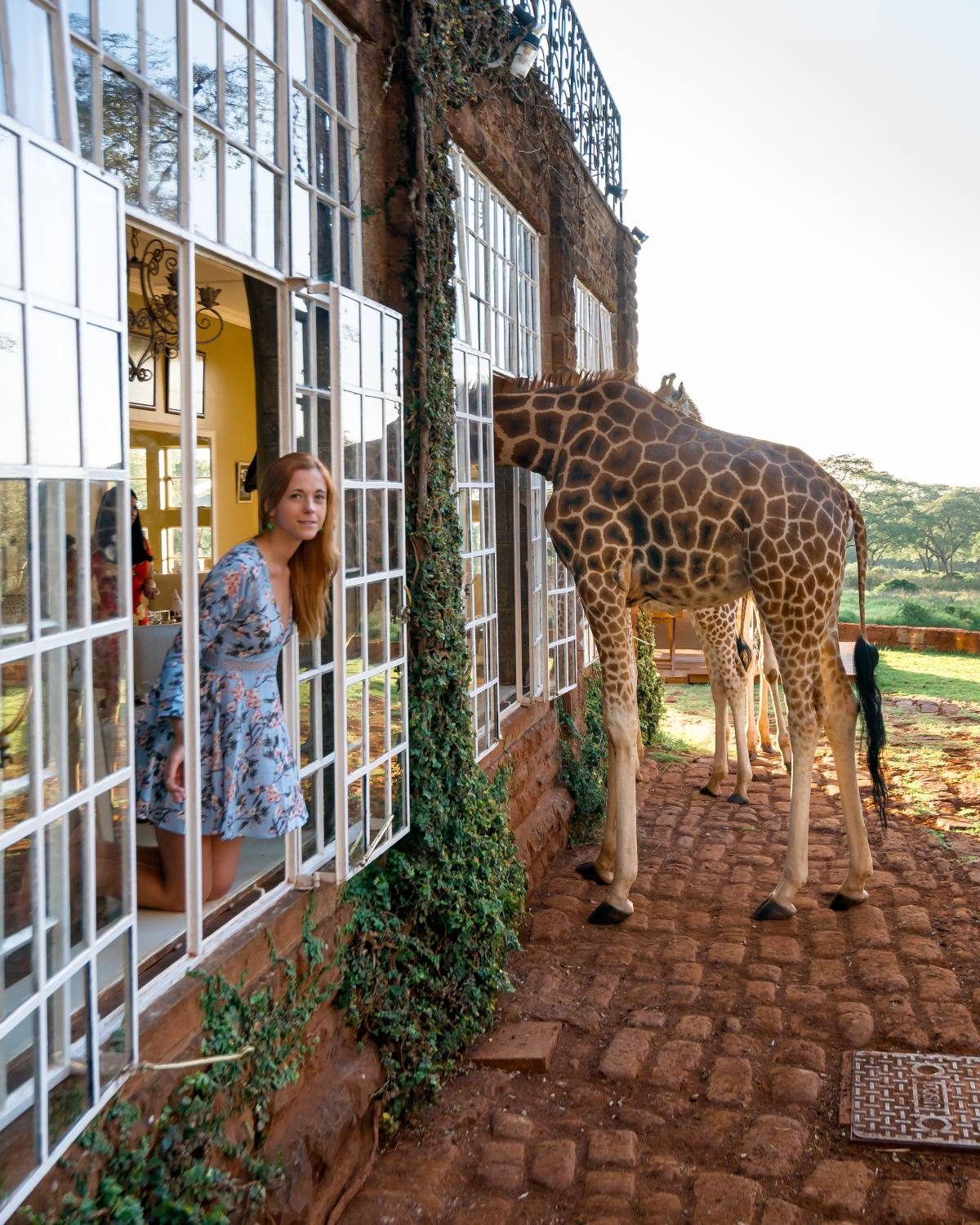 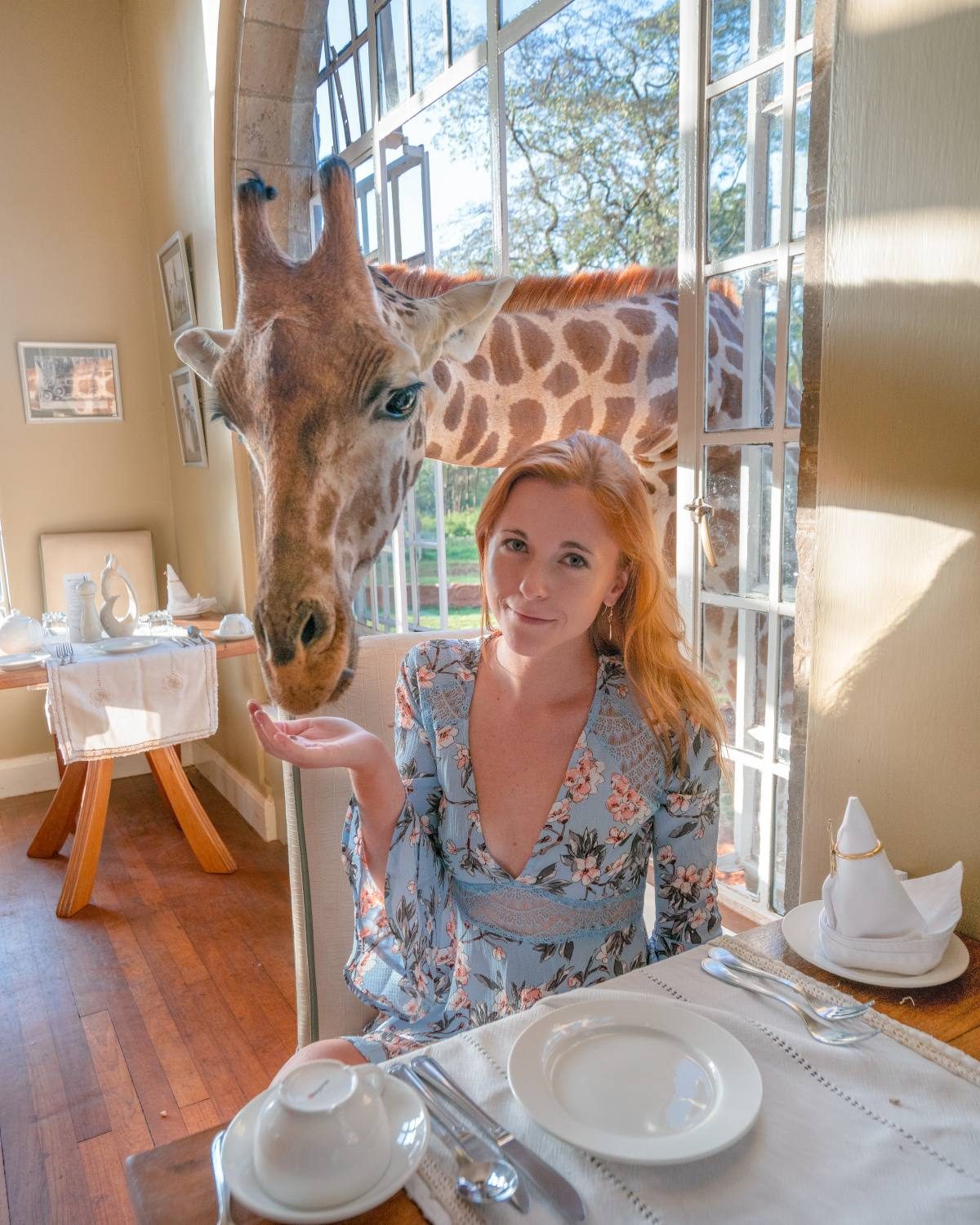 Is 1 night Enough at the Giraffe Manor?

Totally, but remember that these days the Safari Collection wants to book another property of their to stay at the Giraffe Manor.  It’s understandable due to its popularity and don’t worry – their other properties are amazing too!

We arrived around 11 AM and left the next day at 10 AM since the check-out time is very strict. I felt like if we stayed for the second day, we’d want to arrange some special activities, like visiting David Sheldrick foundation with baby elephants, but we did it after check-out anyway without having to pay for an extra night.

Do I recommend Giraffe Manor? Absolutely! Whether you’re planning your honeymoon, want to bring children over, or simply you’re a big fan of giraffes, this unique hotel will satisfy your cravings.

Check out their availability calendar here, but book in advance. 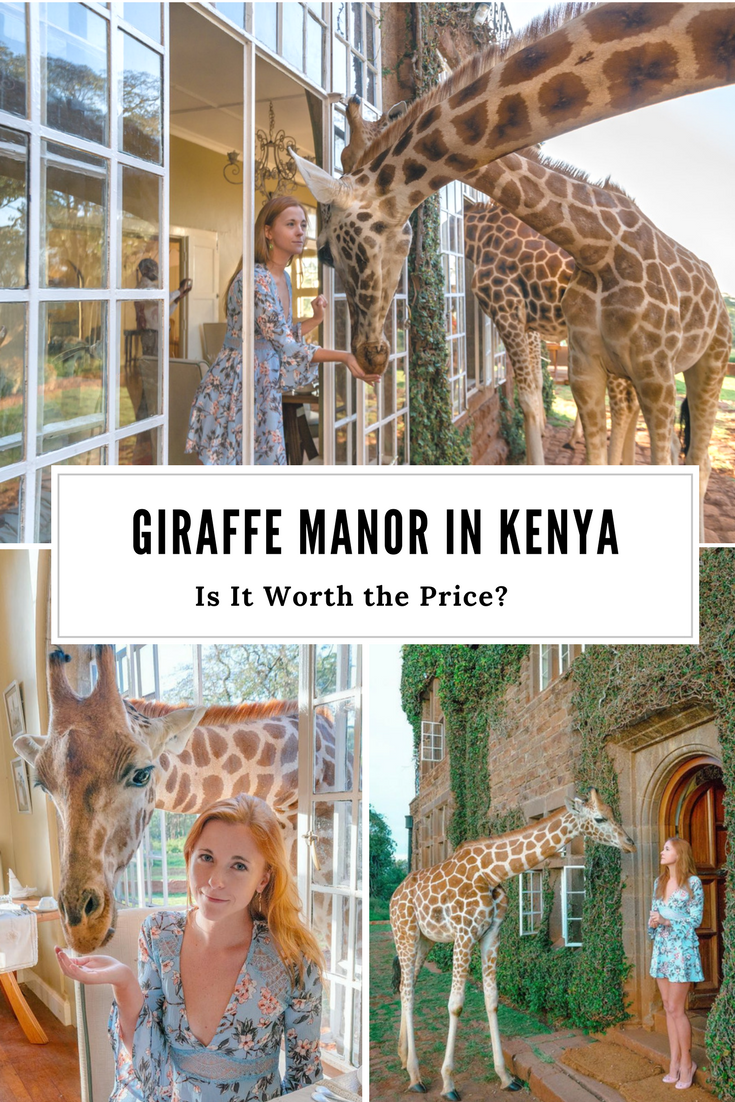 Any questions about the Giraffe Manor in Kenya? Let me know in the comments below!

We were there for one night in October 2022. It's been on my bucket list for 20 years. Every moment was magical. I kept saying "I can't believe we're here. I can't believe we're doing this". The staff was incredible with knowing how and when to take pictures with everyone's camera/phone. While we rested in the early afternoon, a staff member came to our door and asked if she could do our laundry- YES - after being on safari the previous 4 days. Three hours later, the laundry came back fresh and fluffy. The giraffes were unbelievable. Only one minor thing - obviously no screens on the windows and so there were a lot of mosquitos at night. The beds have mosquito netting, but I could hear the buzzing. We were told that these were not the malaria mosquitos (we were taking the meds anyway). Two months later - and we are fine. Will savor those memories and pics forever. Could not recommend more.

I have always wanted to go there. I am now a senior citizen, so I'd better hurry!

Hey, It just looks like such a quirky place, with Giraffes & Warthogs being such clumsy & friendly animals.

Hi, one question, is there some one in the hotel that help you to take pictures? because i can see that you have some pictures with your husband or you ask some one random or you have a tripod?

Thank you, sorry maybe is a dumb question but if im going to spend so much money i want to have those memories on photo.

Not a silly question at all! :) When usually take our photos with a tripod, but when the giraffes are roaming around tripods are not allowed outside (actually neither was my husband so the photo of me with the giraffe in the door is taken by the staff), so some of the staff members helped us with those. During breakfast we had our tripod set, but other people didn't and you can always ask someone from the staff to take some photos - they're happy to help :)

Is it still worth it even if I get to arrive at night 9pm? I know the check out is 10 am.

For just one night? I'd say nope. You want to be there for lunch, afternoon tea with the giraffes and dinner.