Many people were really enthusiastic about Mexican food, so here it is…

What to Eat in Mexico City

Mexican food in Mexico City is definitely different than what most of us think of it and what we can get in other places all over the world. Even simple well-known nachos in Mexico are completely different than those in the US or Europe that are served with greasy cheese. Moreover, as explained before you shouldn’t make a mistake between nachos and ‘Nacos’.

Talking about different meaning of food names it’s impossible not to mention chabacano. In Mexico it’s a fruit which you can get everywhere, although in Argentina chabacano is an offensive word which means an arrogant asshole.

We all know tacos, but outside of Mexico tacos are usually hard shells filled with meat, cheese and beans like famous American burritos with additional rice. Mexican tacos are always soft and filled with meat and salsas. Enchiladas, on the other hand, are crunchy because they’re fried, rolled or seem to be a type of empanadas. My favorite filling? Flor de calabaza – pumpink flower, or huitlacoche – corn mushroom.

I need to say that the best filling is Oaxaca cheese, a type of yellow-white cheese in form of long ribbons. Between tacos and enchiladas are gorditas – fried thicker flour dough, usually filled with cheese, potatoes, mushrooms and some meat.

Similar, but not exactly the same thing is sope which for me is a type of Mexican pizza (criticize me here, but try to explain to a foreigner what’s a sope). This cake with a thick corn base is covered with beans, white hard cheese, meat, lettuce and green salsa.

As you could clearly noticed corn is unenviable in Mexico. Tamales are another combination of corn and natural leafs. This masa is usually combined with green salsa, chicken, mole or sweet sauce and wrapped in leaves tastes incredible! 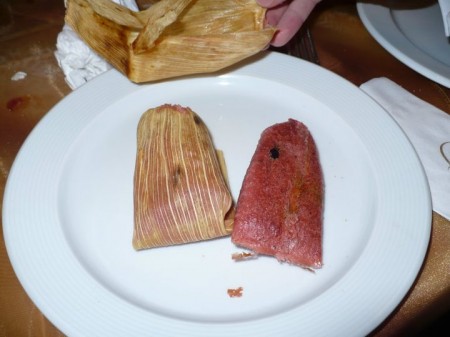 Some would say Mexican food is spicy, but in fact it’s not that hot. Apart from the one type of green salsa which even I, who can eat jalapenos as chips, can’t eat. People love mixing tastes here. The most popular spice is tajin which combines a taste of chili and lime. Another mixed taste is mole, a type of sauce with peppers, sesame, chocolate and different spices, eaten mostly with quesadillas or meat and it’s really good – sort of chili chocolate like. 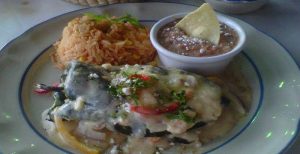 I wouldn’t be able to post this note without mentioning my favorite dish – chile relleno. Unfortunately it’s impossible to prepare it anywhere else, due to the lack of pepper to stuff. It’s a big green chile stuffed with (in my favorite version) cheese and mushrooms or seafood, either bread-crumbed or served in a sauce.

Mexican desserts are simply delicious. The most popular are obviously churros, kind of long fried donuts, which are sold at every corner. Churros rellenos are served with cajeta (type of a a liquid fudge almost the same like dulce de leche) or chocolate. Talking about sweet snacks the best option are Swinkles, sweet and spicy jellies.

I cannot skip spicy Tamarindo fruit candies and very very spicy candies or drinks made of Chamoy fruit. Mexicans love chamoy, but as my friend described it it might ‘taste like a rotted jam’. All those candies might be drank with Horchata de Arroz which is a typical white-colored drink, but made of rice instead of milk. 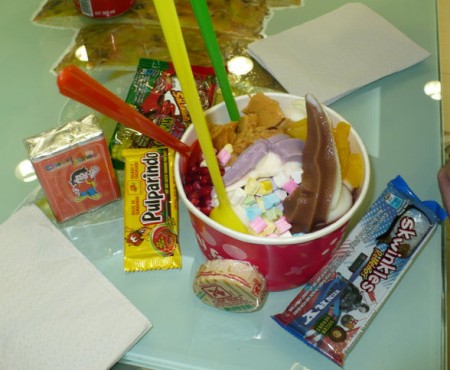 What about alcoholic drinks? Obviously the first thing that comes to mind is Tequila! Most people forget that one of the most famous liquor in the world – Kahlua is also from Mexico. This coffee alcoholic liquor is used to drink on rocks or a an ingredient of many cocktails, like for instanceWhite Russian.

If you’re not a fan of sweet alcohol you might get your Corona, but don’t get surprised when it’s not going to be served in a bottle topped with a piece of lime. Almost noone drinks Corona like this in Mexico. People rather go for Negra Modelo or any other beer instead. Mexican beer can be prepared in a form of michelada. The concept of this creation is very simple – the glass is covered with salt and the beer is mixed with lime anda salt. Brave ones might add ‘clamato‘, spicy tomato concentrate, to improve your taste.

Beer enthusiasts should try Pulque. It‘s a milk-colored drink, although it doesn’t contain milk somehow. Don’t ask me how come, because I have no idea!

What I’ve learned was that this drink was supposed to be an exclusive one, although now only poor people and tourists are drinking this. Vodka fans should at least try Mezcal, no matter how terrifying it is. Made of maguey – agave plant, also has a ‘pickled’ snake in a bottle.

Apart from traditional snacks as nachos, here you can find totopos. They are tortillas cut into triangles and fried for chips. When totopos are warm, mixed with green salsa, onion, scrambled egg, cheese and possibly meat are making a breakfast dish called chilaquiles. It’s my personal favorite dish.

When totopos are round and have a salad, meat or beans with cheese on top then they’re called tostadas. Tostadas alone might be accompanied by Pozole. It’s soup made mostly from corn and meat, which in my opinion isn’t very good.

However, when I found out the historical background of pozole I realized it’s even worse its taste. According to research in these special occasions, the meat used in the pozole was human. After the prisoners were killed by having their hearts torn out in a ritual sacrifice, the rest of the body was chopped and cooked with corn. The meal was shared among the whole community as an act of religious communion. Nowadays we just have a chicken pozole 🙂

If pozole scared you away you should probably finish reading this note here! Mexicans are also knows for eating different types of worms. Grasshoppers aca Chapulines are traditional snacks, but I also had a chance to look at Chinicuiles. I didn’t dare to try tho. 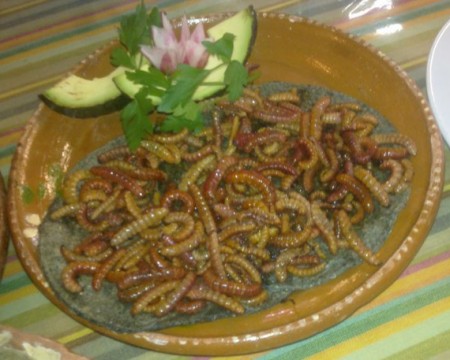 21 thoughts on “What to Eat in Mexico City”