Ha Long Bay has been a popular destination for travelers in Vietnam for decades. This breathtaking UNESCO world heritage site also recently received the honor of being named one of the New Seven Natural Wonders of the World, so visiting its thousands of cliff islands is a must for any visitor to Vietnam. 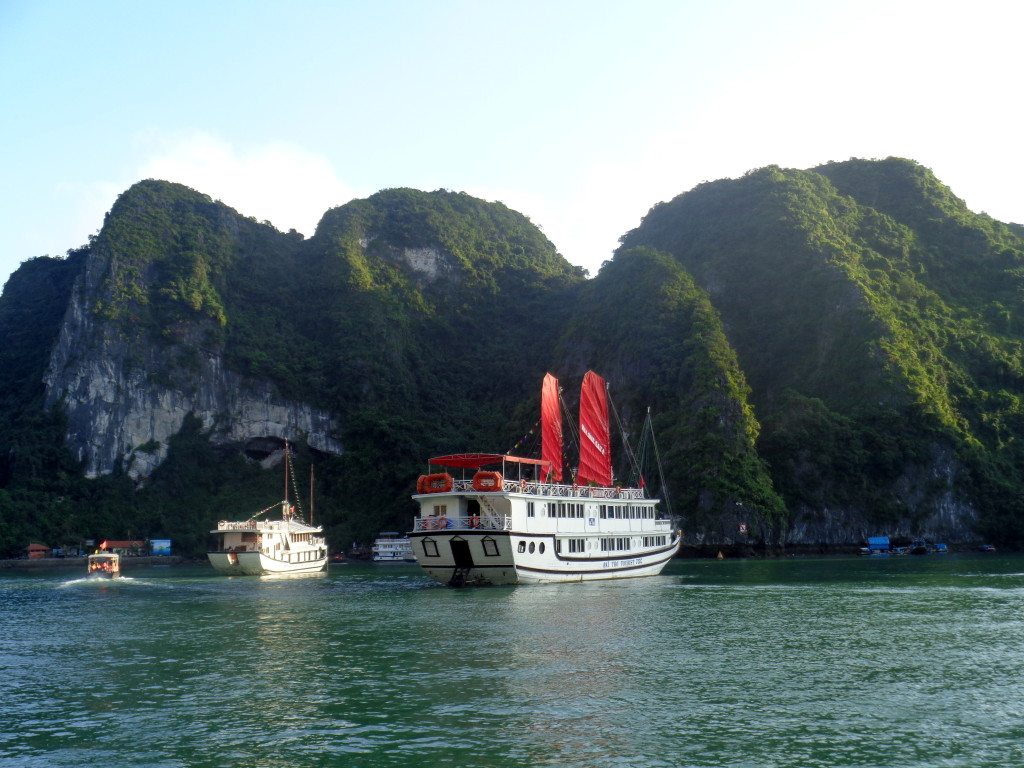 There are a few options for visiting Ha Long Bay, but most will choose to take a cruise for either one or two nights. Picking the right trip is actually not as easy as it sounds due to a lot of travel agencies offering tours. Choosing a bad one would mean a terrible experience and a huge waste of money. So then, what should you consider when picking a tour? 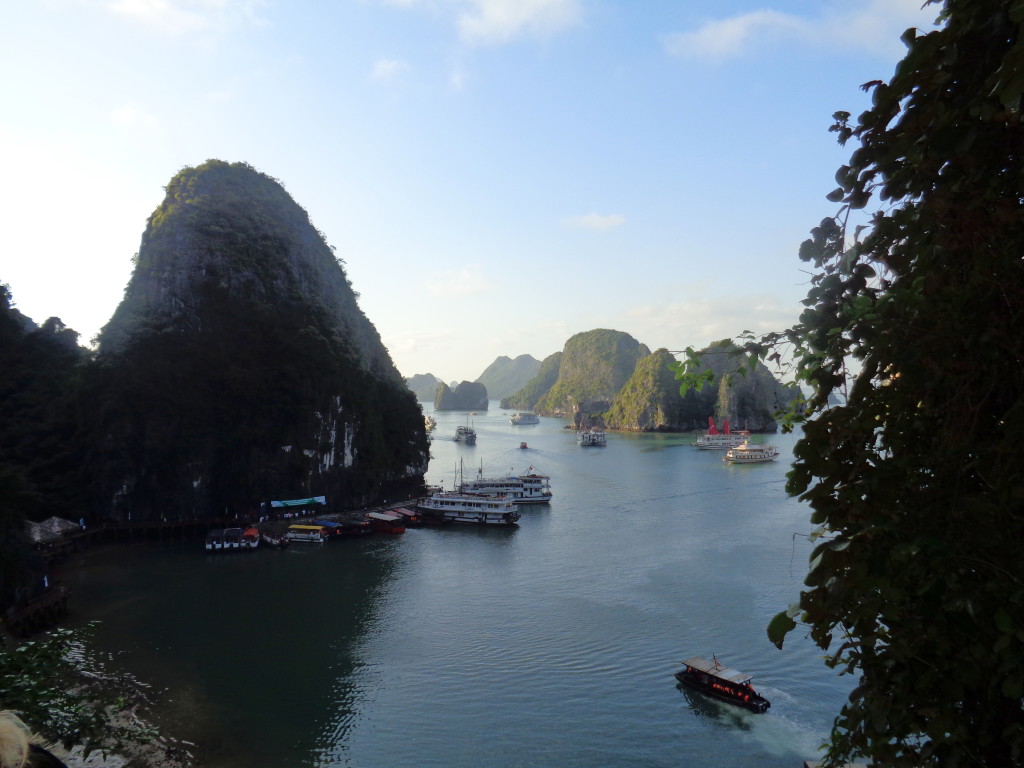 I chose to take a tour with APT Travel that I purchased from the travel agency at Hanoi Airport. I was a bit hesitant to book a tour right after I got off the plane. You know: scams. But the travel agent offered me a discount on a taxi if I bought a tour with her. My friend and I paid $120 each for a package including everything. 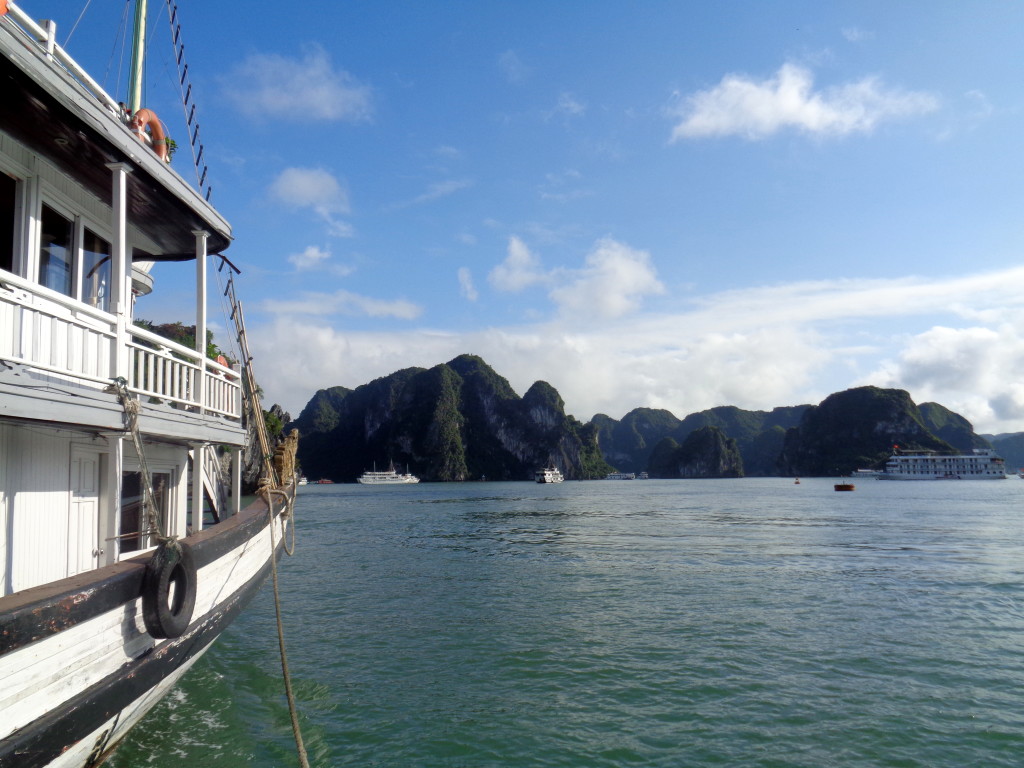 What did we do on the tour?

We got picked up early in the morning by a bus for the long drive to Ha Long Bay. During the bus ride, our guide introduced himself and explained the tour, along with some brief history lessons and jokes. We stopped once for a bathroom and snack break and eventually reached Ha Long Bay around lunchtime.

When we boarded our boat, which was also our accommodation for the night, we almost immediately got lunch and started sailing. The food was absolutely great and everyone could find something they liked! Vegetarian, chicken, seafood, rice; it was more than enough for everyone on board. 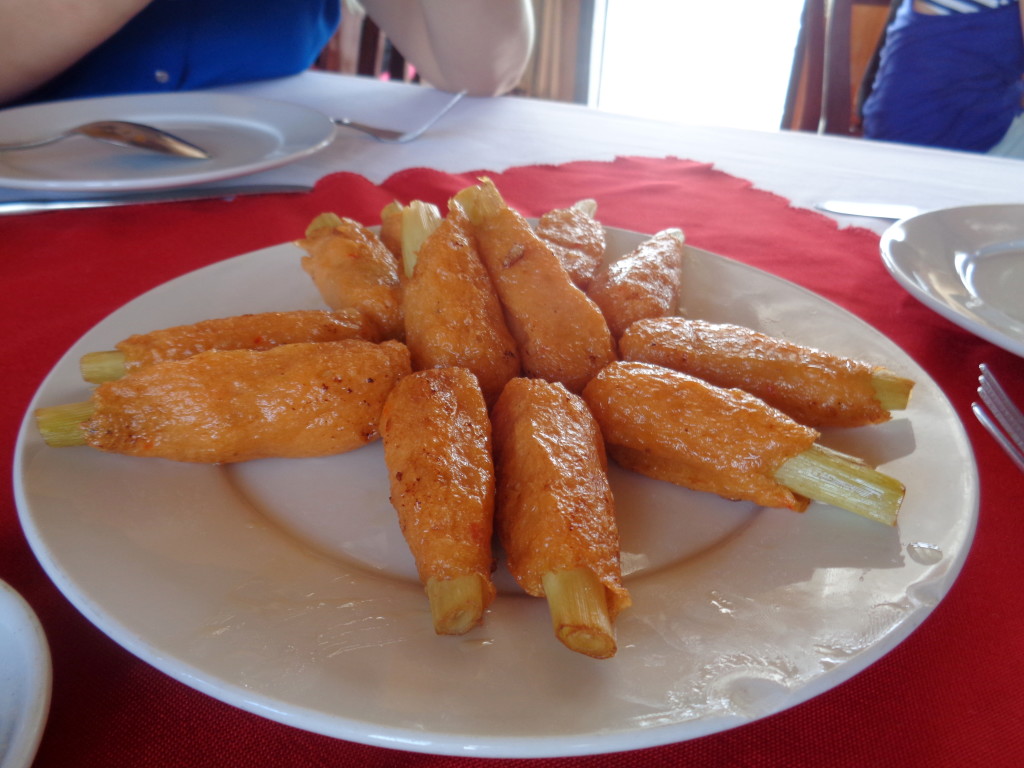 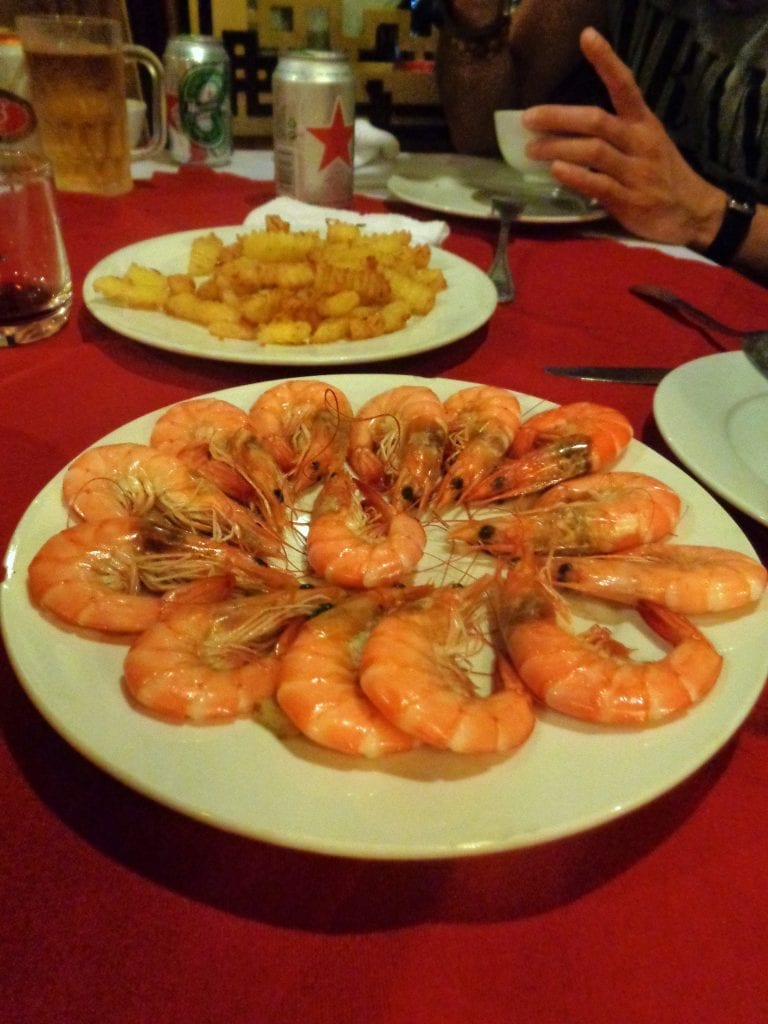 After we got settled into our rooms, we were asked to jump onto another smaller speed boat to sail to some places where the bigger boats weren’t allowed to go. First, we got to go kayaking in a grotto where we saw monkeys scampering along the cliffs. After we all came back on board the boat, the tour guide took us to see a cave.

I’ve been to many caves in my life, so I didn’t expect much. But I have to say it was interesting to see a cave that was basically in the middle of the sea. Our guide was also excellent for the entire tour, explaining everything to us and constantly making jokes. 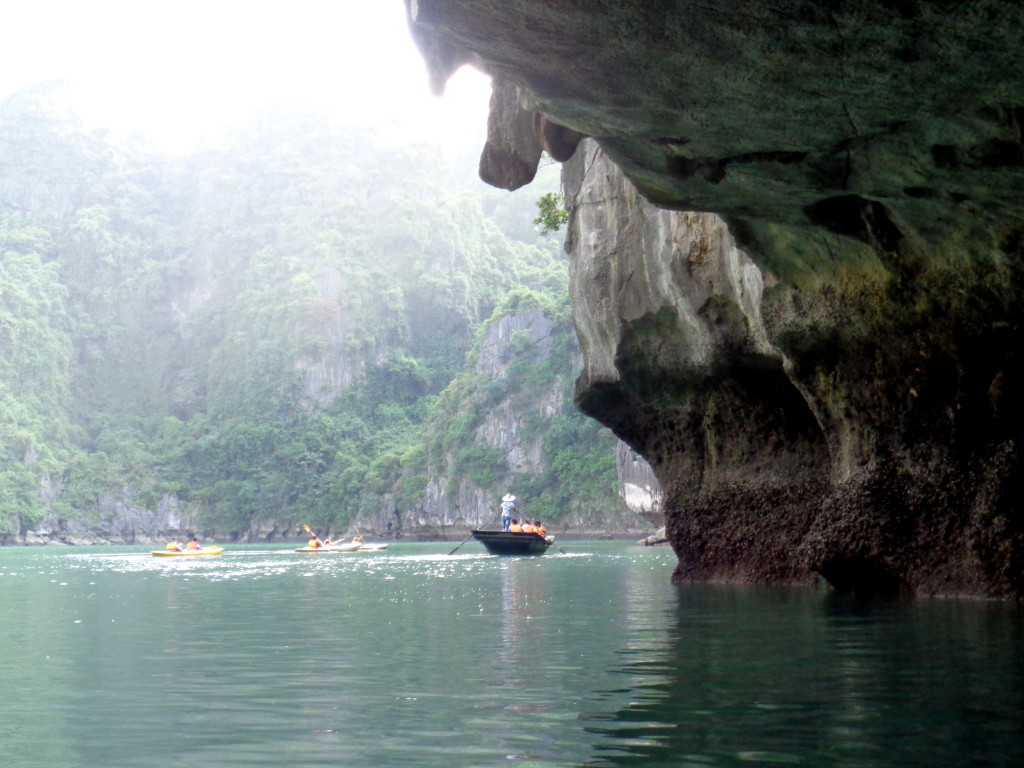 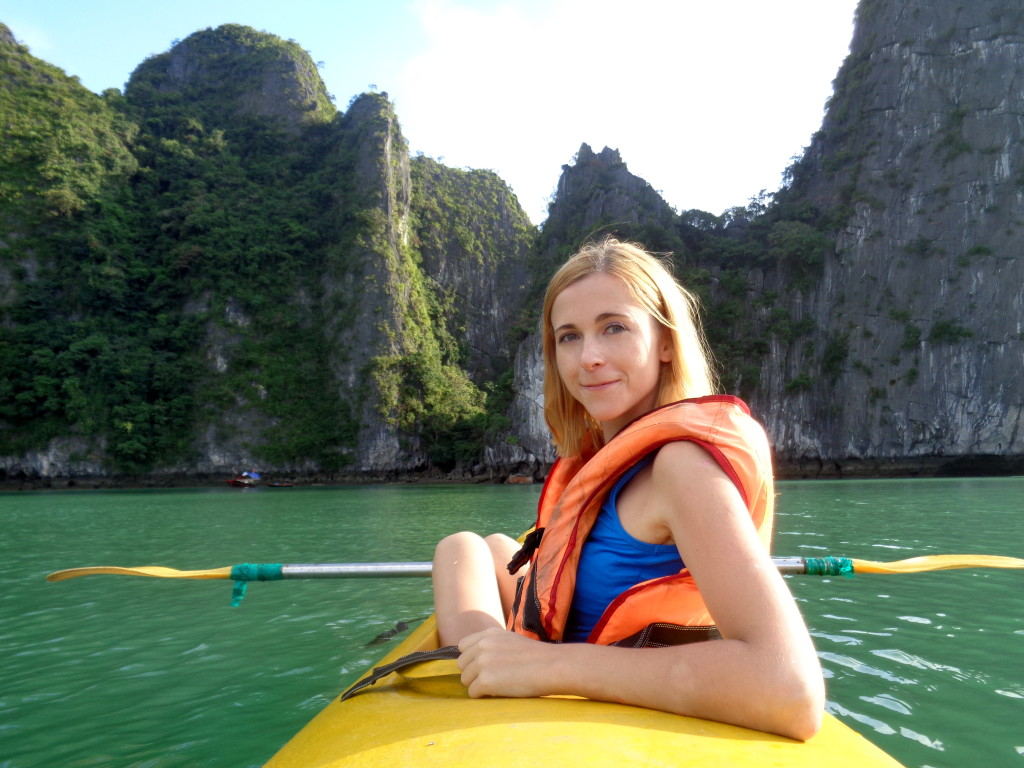 After we got back it was time to see the beach. Unfortunately, by the time we got there, it was already too chilly to swim so I played with some monkeys instead. In contrast to Balinese monkeys who decided to bite me, these monkeys turned out to be super friendly. One of them even exchanged my leftover coconut for some money she stole from someone earlier! 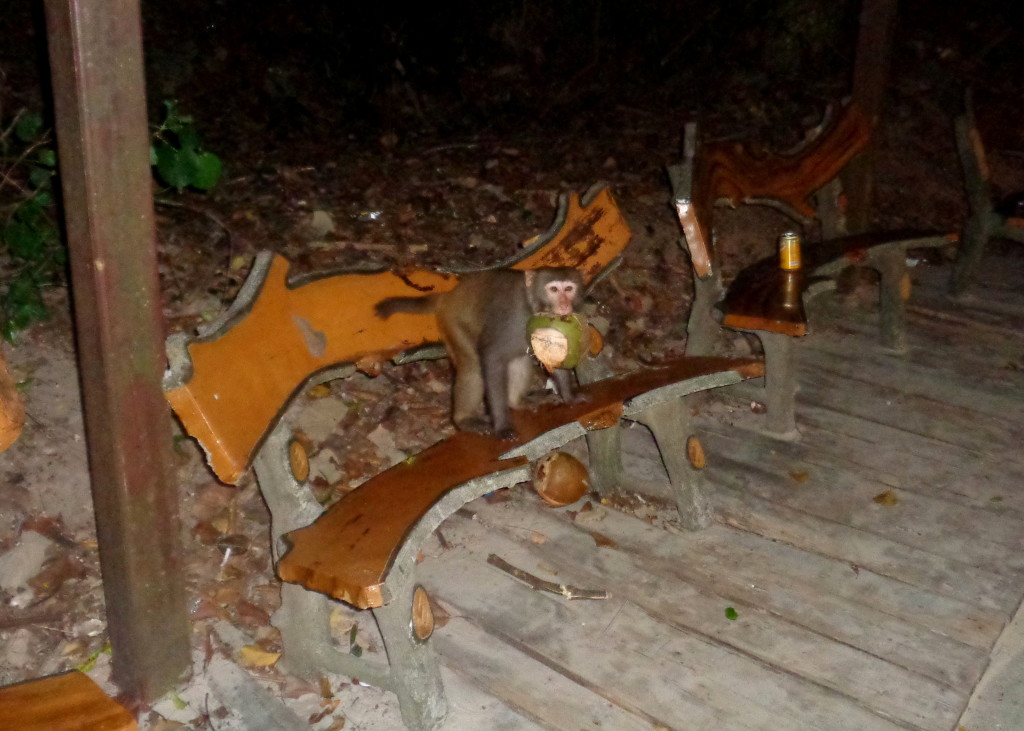 When we came back to our boat we had time to rest. We watched the sunset and took part in the preparation of our dinner appetizer: spring rolls. After dinner, we just hung out with the other tourists and drank and played cards. 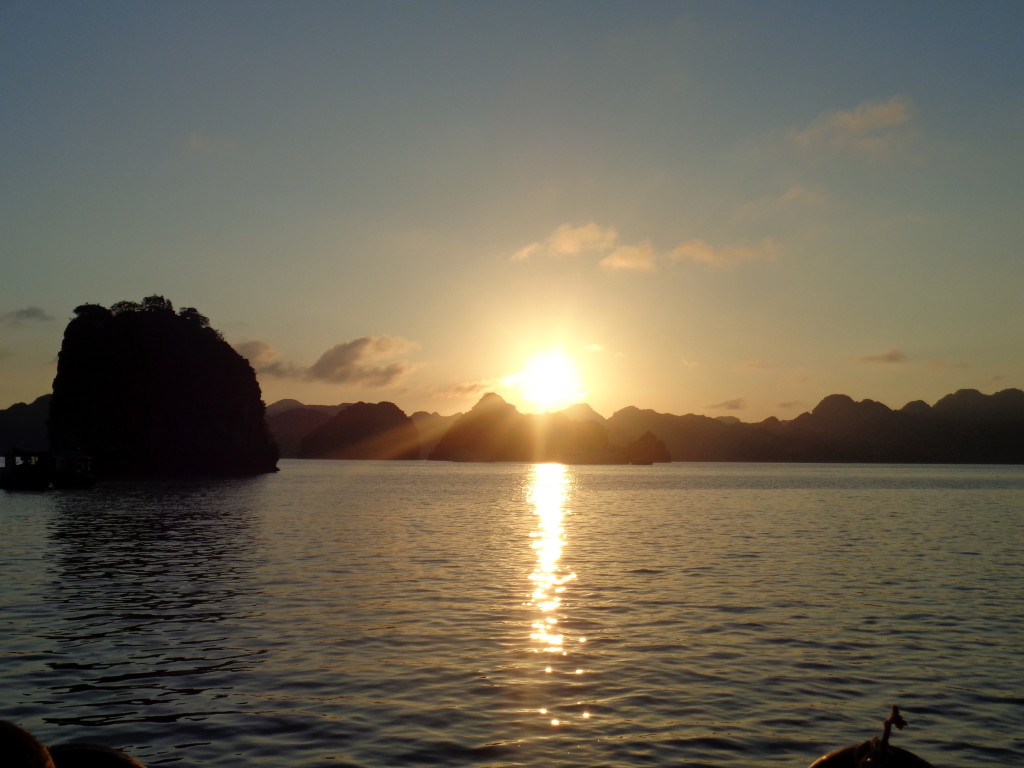 The second day of the tour was much less exciting. We only got to visit a pearl farm and sunbathe while we sailed back to the port. The weather was beautiful though, so I can’t really complain. We got to spend some time relaxing on lounge chairs in the sun. 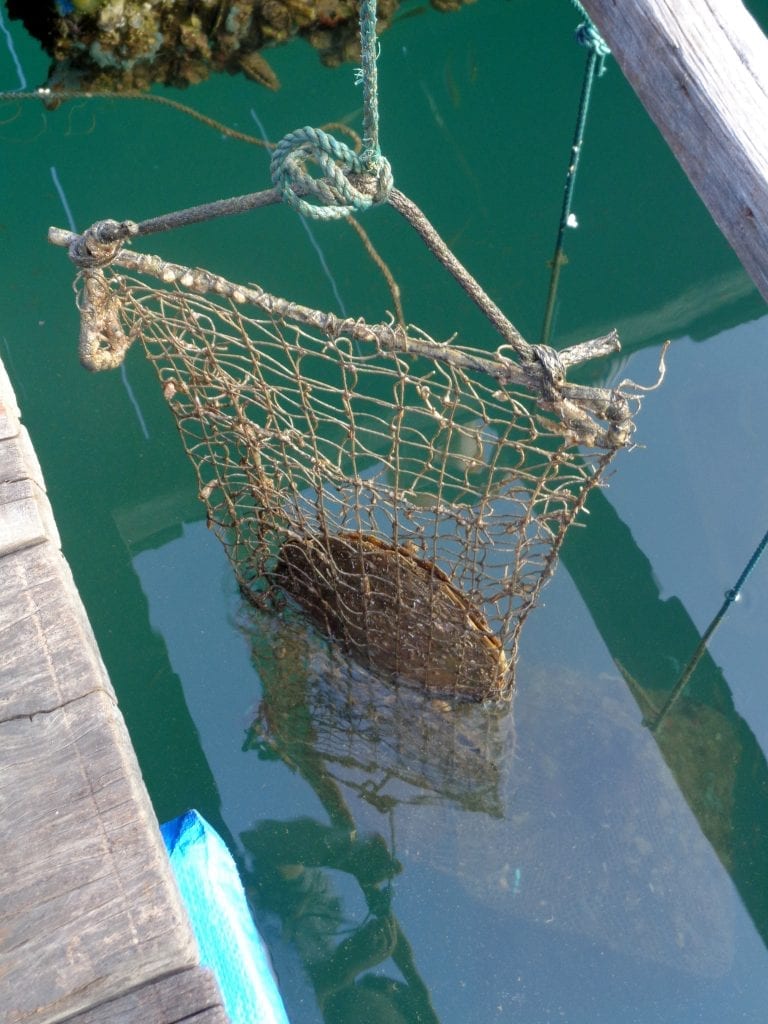 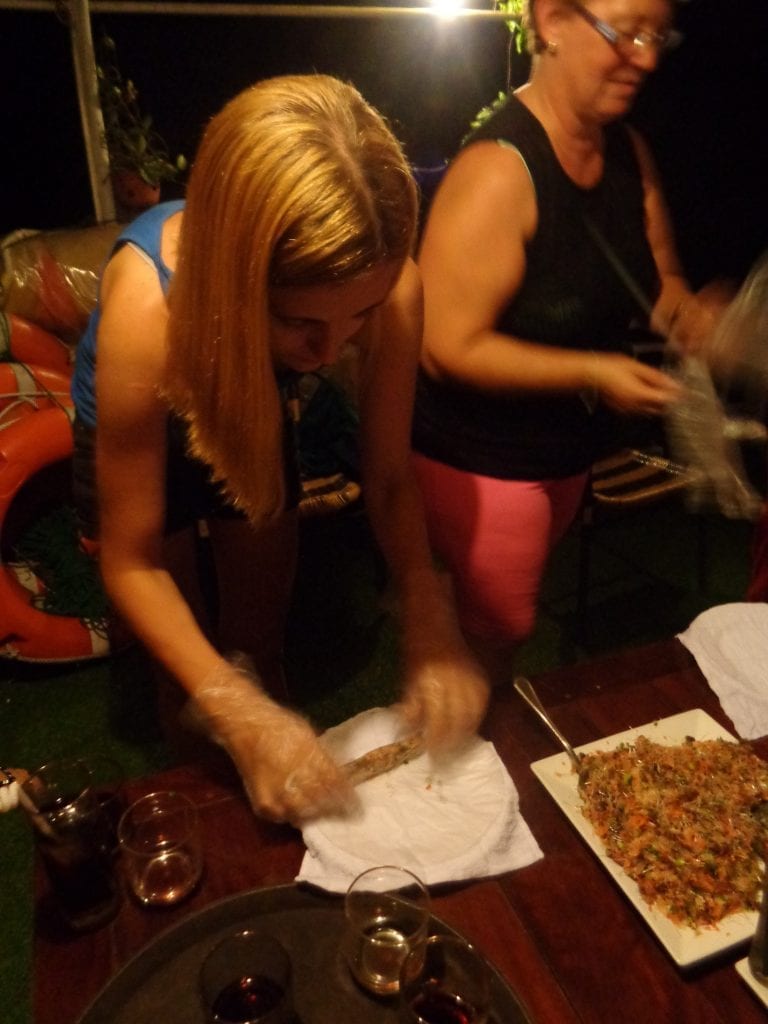 Don’t forget to arrange a health insurance before heading to Vietnam. The easiest and the most reliable travel insurance is World Nomads Travel Insurance. Get it before your trip, especially before a Halong Bay cruise, to avoid unnecessary troubles that might ruin your holidays!

I think I was incredibly lucky to go to Ha Long Bay. The place was stunning! I’d recommend it to anyone heading to Southeast Asia!

Not long writing, but it's enough information to read. You tell about your trip as a story, I like so much your style of writing. Thank you!

Thanks for your article, Halong bay is wonderful place. However, I suggest only one night on board to avoid boredom, next one night you can overnight on the hotel.

Great Tips!! I came across your blog, and there I found useful tips about Halong Bay in Vietnam. It's helpful for us. The food looks delicious. Thanks for sharing.

Hi Anna, What recommendations do you have for getting to halong bay from Hanoi? What is the bus like and costs? Or where would you recommend one find that information? Thank you. Love the blog.