‘Who takes your photos?’ is the most common question I get on my social media channels and a lot of people get confused when I said that it’s often my best friend Tripod. While not all my shots are taken the same way I wanted to share with you my little tutorial on how to take good photos of yourself when traveling solo, with or without a tripod, as I take most of my Instagram pictures solo.

Usually, solo travelers rarely show up in their own photos unless they have an Instagram husband. There’s even a saying (that actually makes me mad), that behind every pretty girly Instagram account there’s a boyfriend or husband behind it. While quite often it’s true, it doesn’t have to be the case.

You CAN take pretty pictures of yourself when you’re a solo female traveler.

While I do have a husband, he rarely travels with me and when he does, he prefers to take his on photos than photos of me. Since I prefer to be in my own photos, especially after I decided to start a travel blog.

How to Take Good Photos of Yourself?

What Do You Need in Order to Take Your Own Photos?

Lots of patience and not worrying about looking silly. Also, the ability to disregard other people’s stares. Once you master the smize technique you’ll be fine and take your own photos quicker 😉

By taking my own photo I don’t mean to say ‘I’m beautiful and everyone just loves looking at me’. If I take a great shot of something anyone else can have the same one. By adding myself in the photo I’m going to have a photo that only I’ll have. Does this make sense? 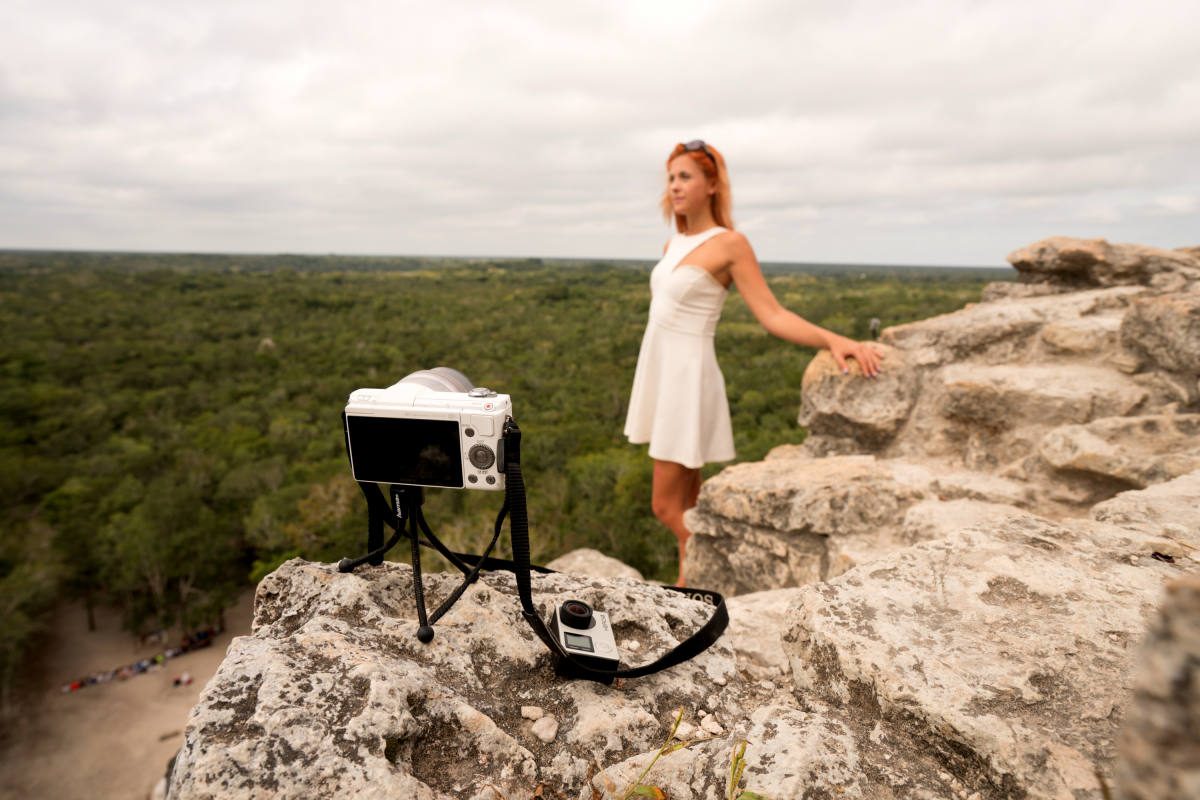 Photos I Took and Edited by Myself AKA Social Proof 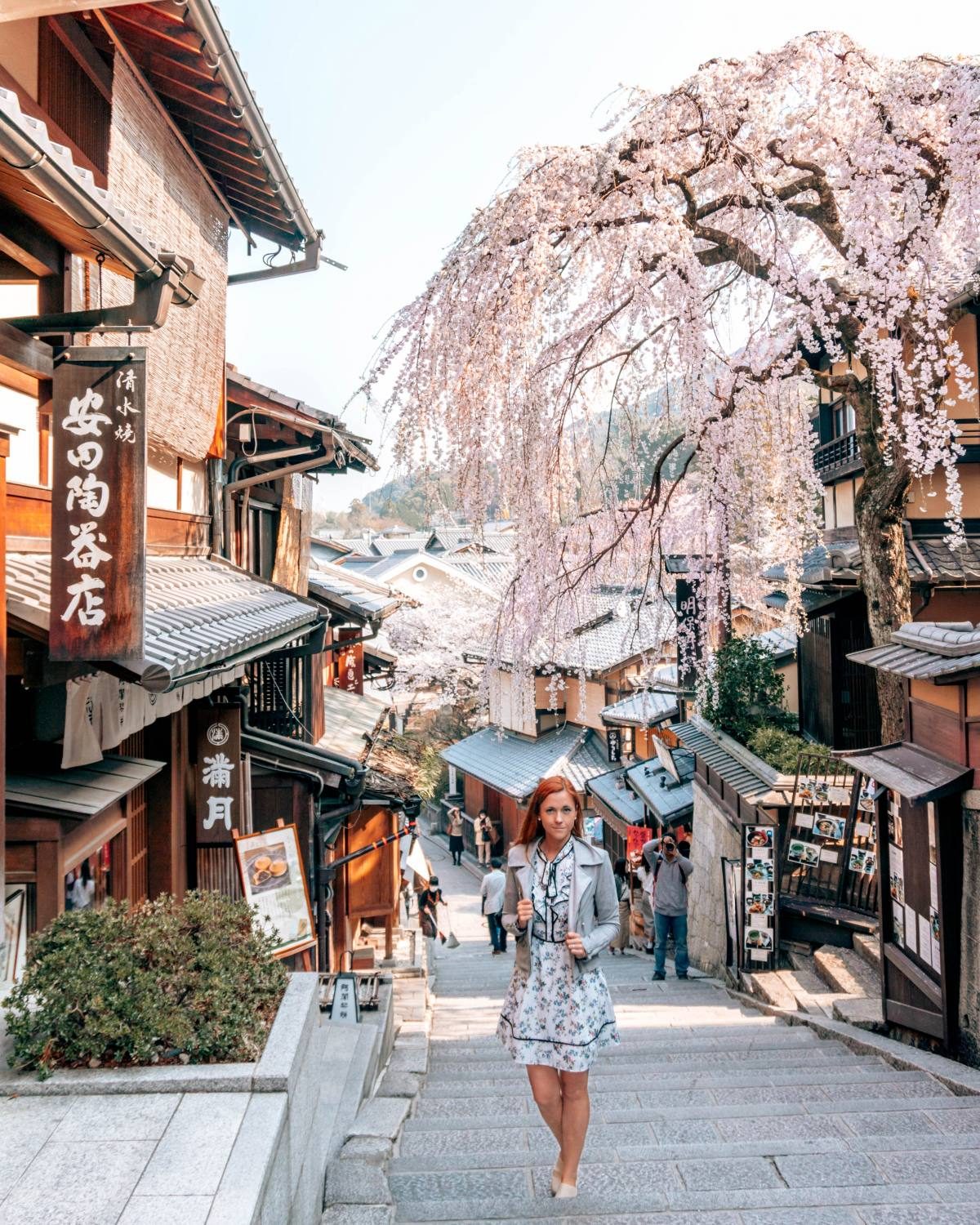 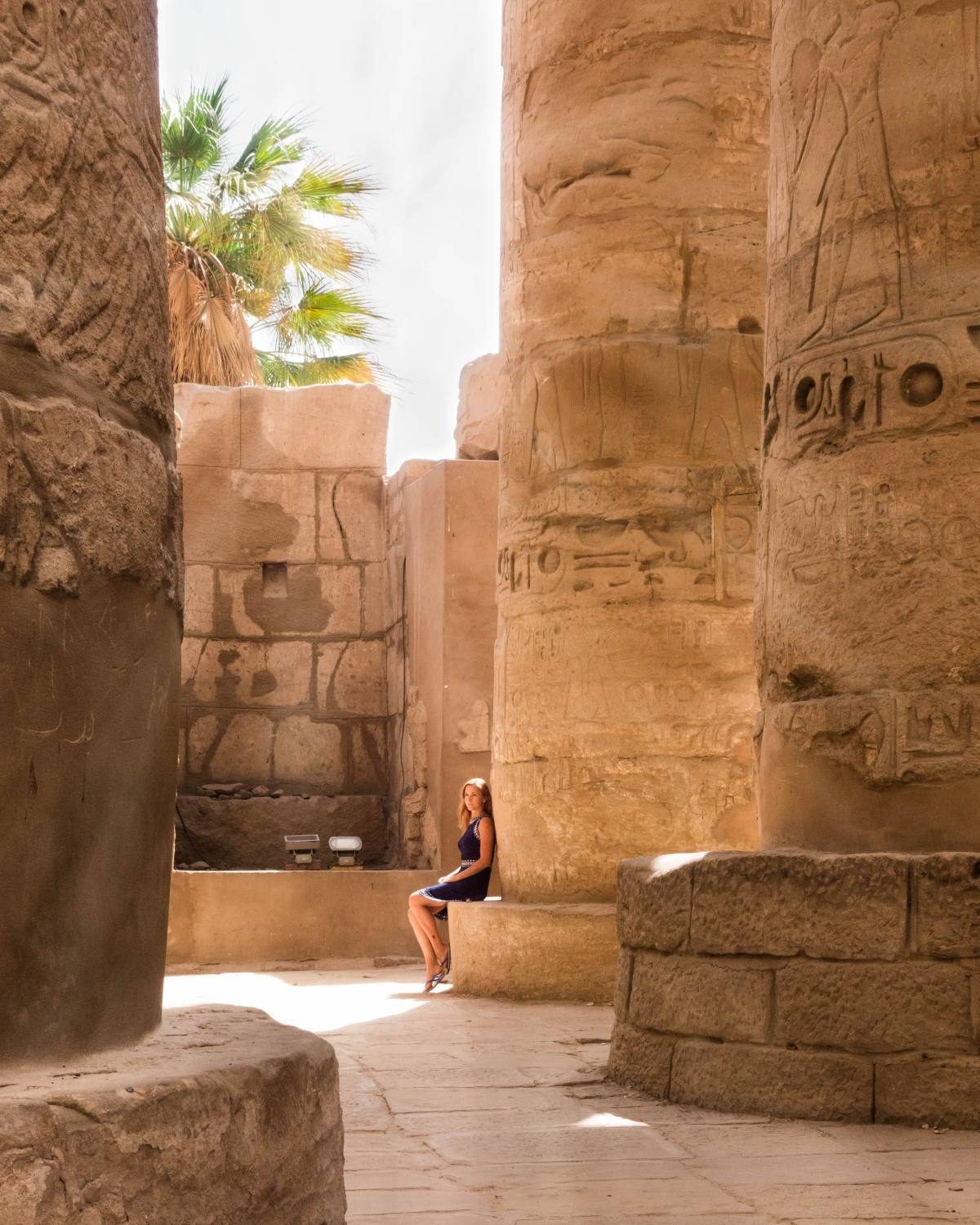 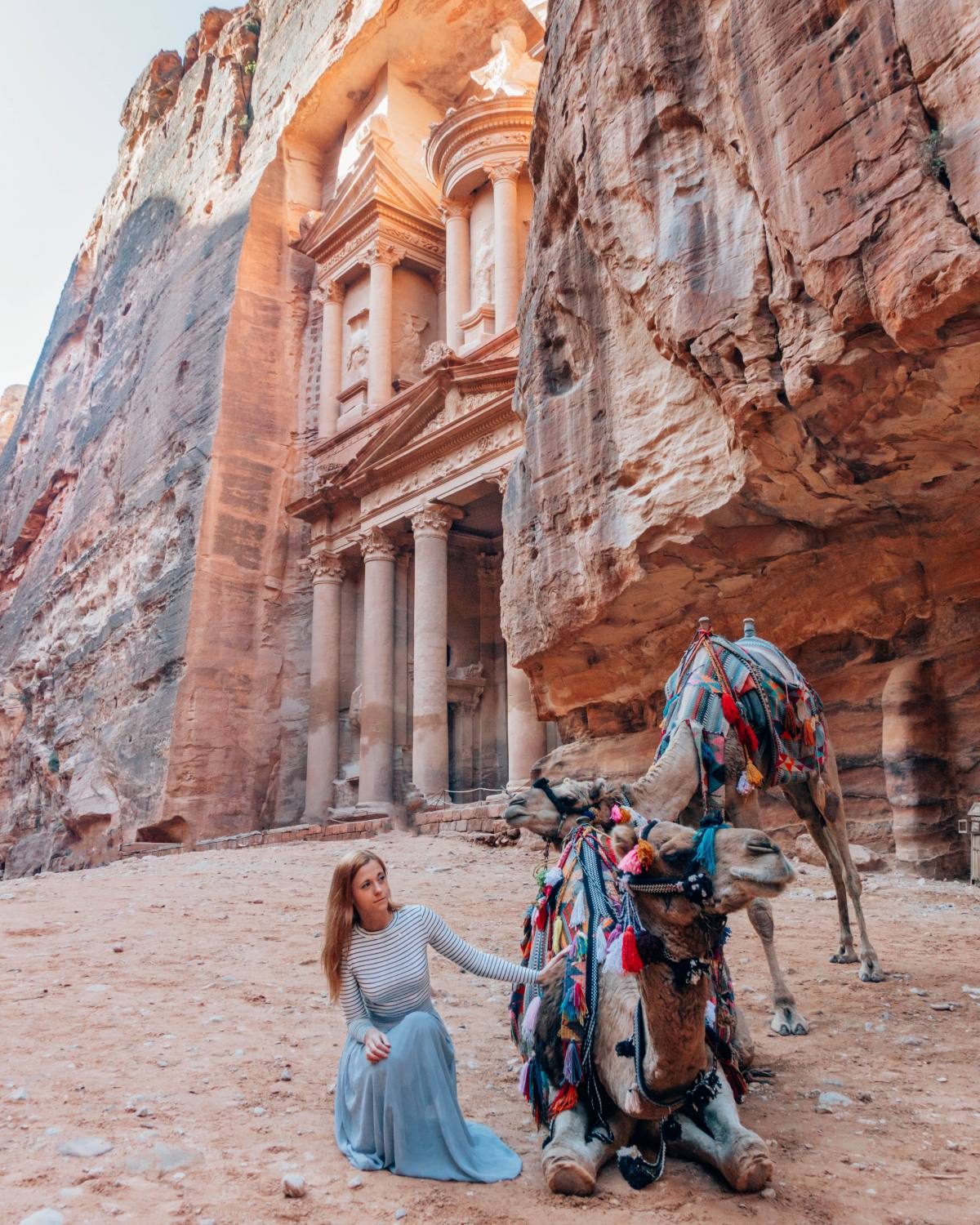 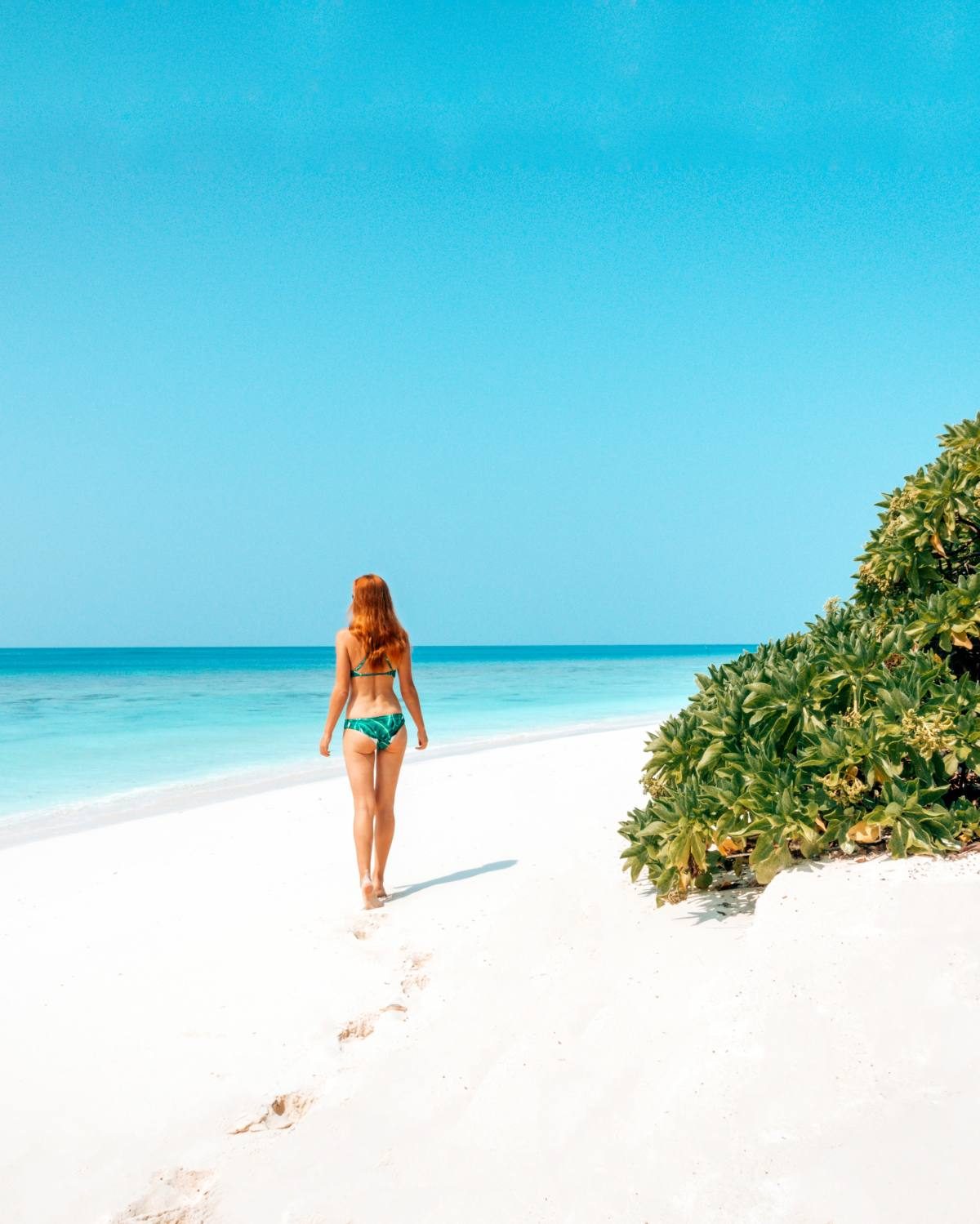 Ways to Take Beautiful Travel Pictures of Yourself

Use a Mirror or Reflective Surface

First, let me tell you that by taking photos of yourself I don’t mean these bathroom mirror shots that almost every celebrity decided to put on their social media channels recently. Unless your bathroom looks like this one below I’d never recommend you doing this 😉 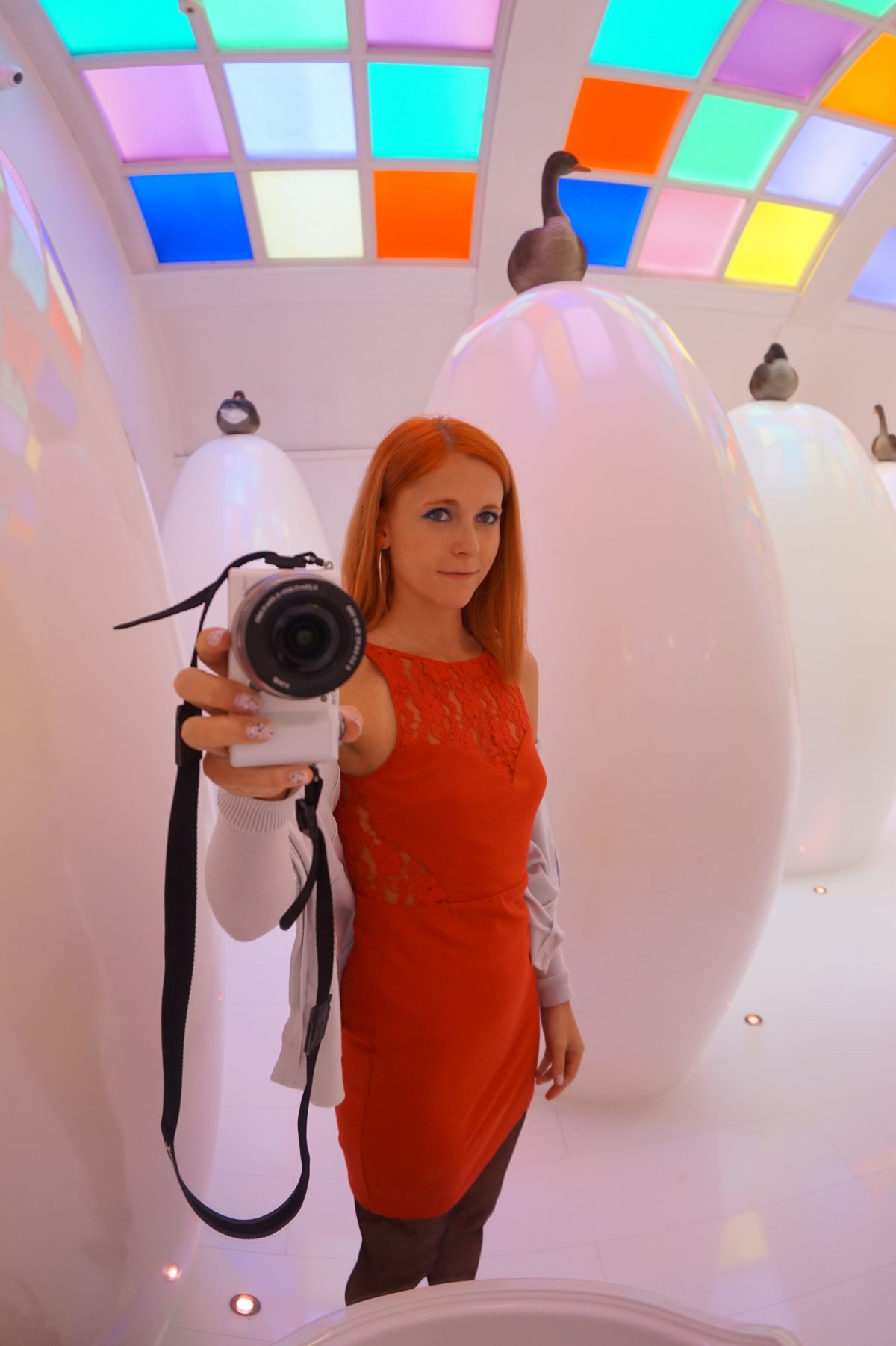 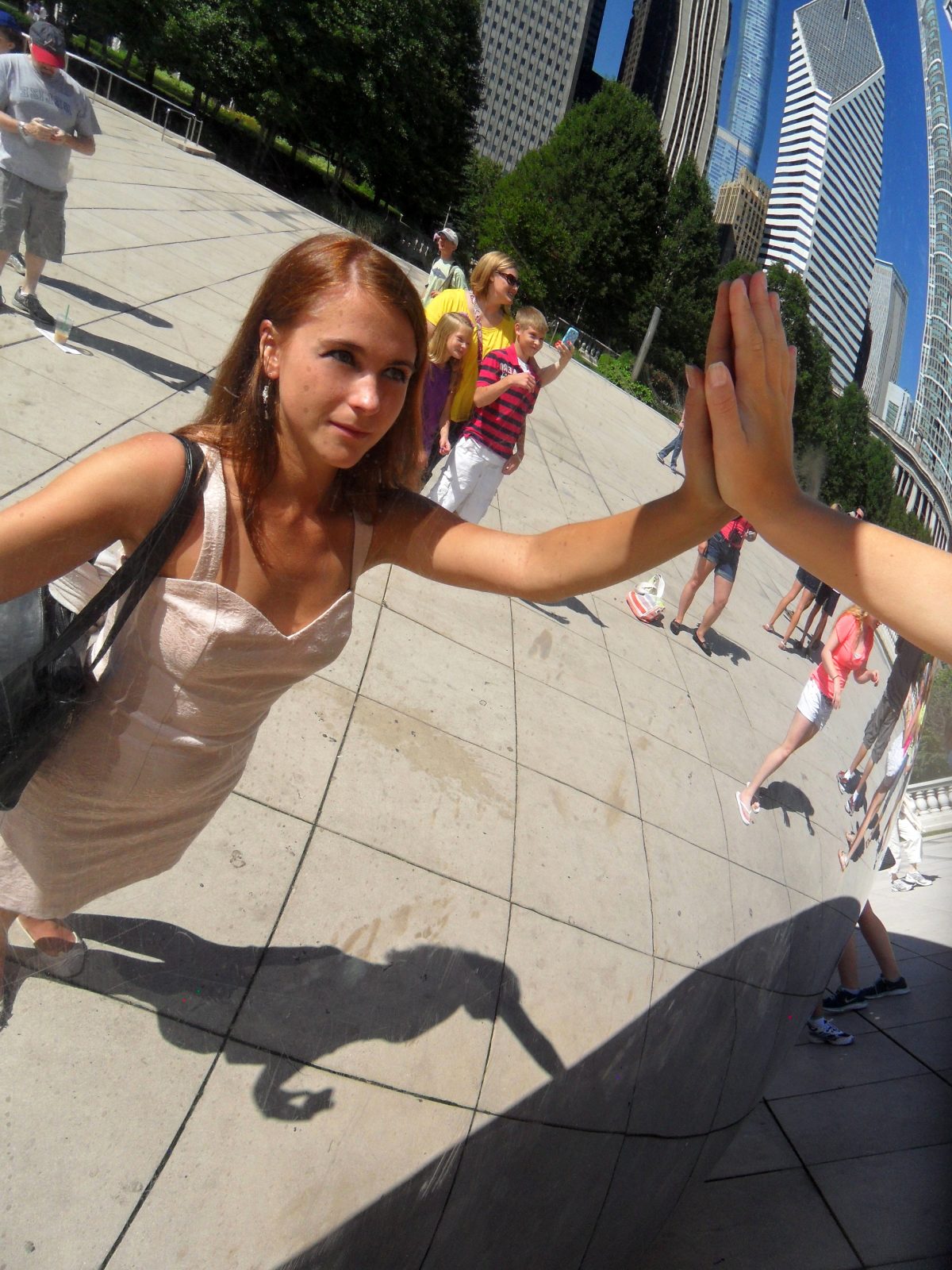 Ask Strangers to Take a Photo of You

While it might seem like the most obvious option, it’s not always the best one. In my case, photos taken by other people turn out to be bad, with either my head or legs chopped off. Unless you explain to a person what exactly do you want and tell them to hold the camera in an exact position, your photo will probably be useless.

My Tip: Find people with a tripod, they usually know how to take a decent photo. Hold the camera the way you want it and show them a point of interest. 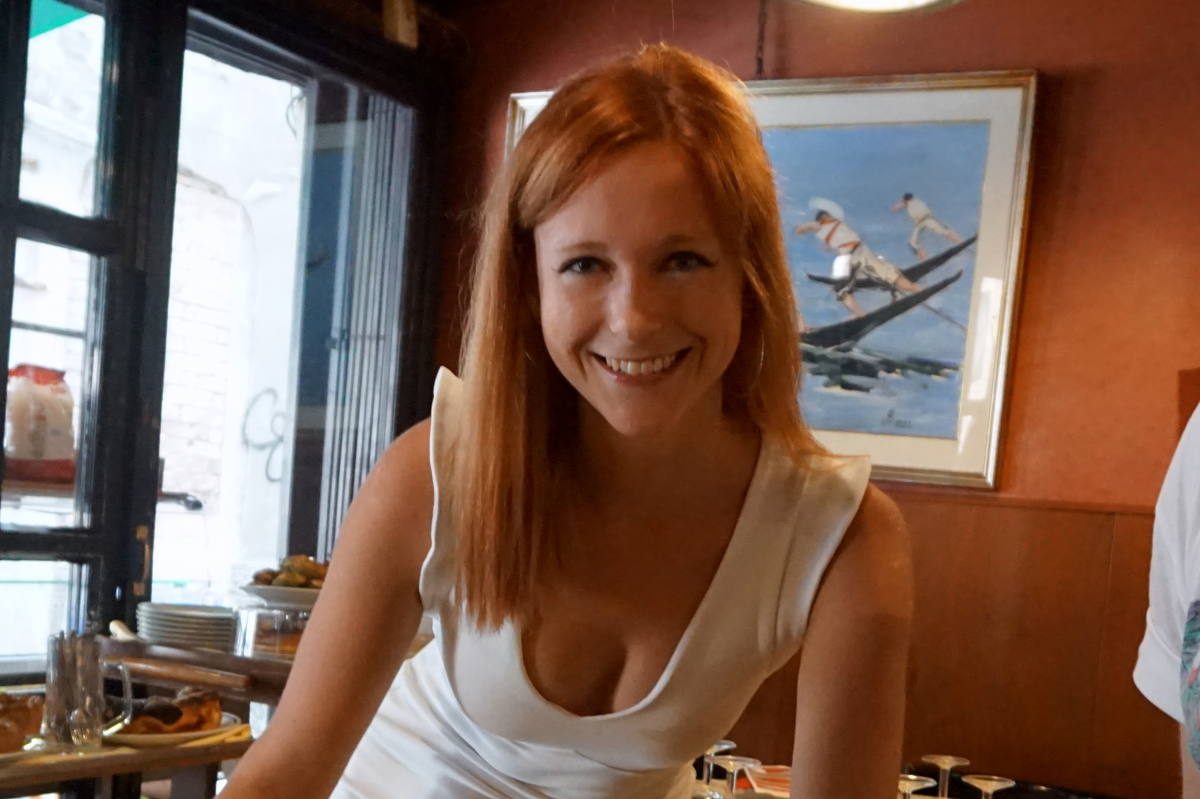 I wanted a photo with a fish…

Reality check: photos like this one below can probably only happen when they’re taken by a professional photographer. Sorry guys!

Tripods are my best friends when traveling solo. I currently use a Manfrotto Tripod, as it’s sturdy enough to hold my camera and doesn’t get blown by the wind. I don’t recommend the cheapest tripods out there for expensive cameras, as once the tripod falls you might break your fancy camera and lenses.

I previously used a gorilla pod and a mini tripod that fit in my pocket and could be used whenever I needed a random shot. Both of these tripods were as cheap as below $50 on Amazon and they don’t take much space in a suitcase.

A tripod is also recommendable for more advanced photographers willing to take photos with long exposure (eg. photograph the northern lights or dark places). No matter how steady you might think you can hold your camera it’s never going to be steady enough to make your shot not blurry. Trust me, I thought my hands were still too 😉 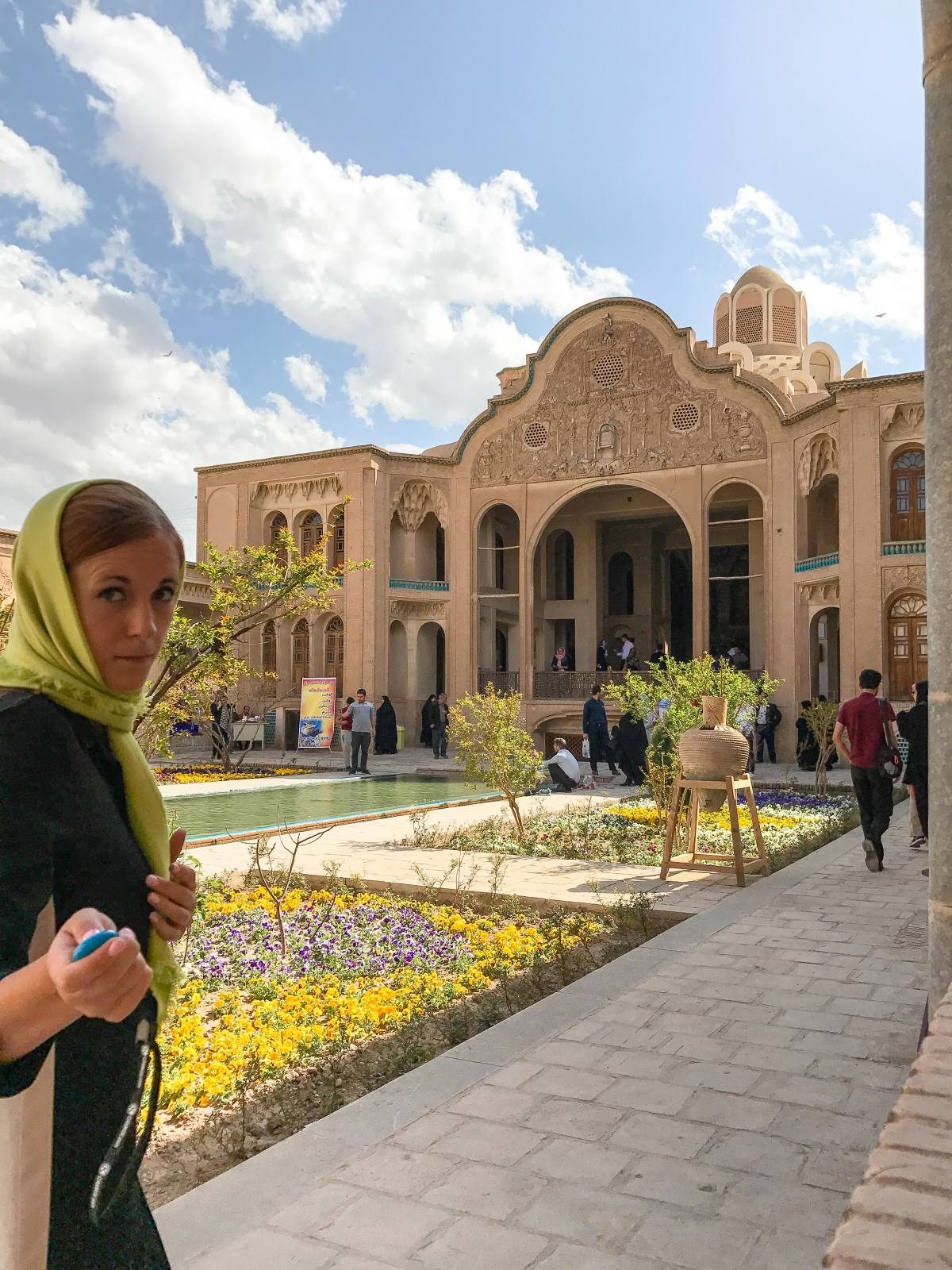 How to Take Photos Using a Tripod if You Want to Be in Your Shot?

You basically have three options: either set the timer for 10 or 20 seconds and run in front of the camera or purchase a remote controller for your camera or phone. You could also set your camera to burst mode.

Burst mode is a camera setting that allows it to take lots of photos in a short time. How many depends on your device, but even an iPhone can take 10 frames per second! You’ll have more photos to go through when choosing the right one, but I think it’s worth it! 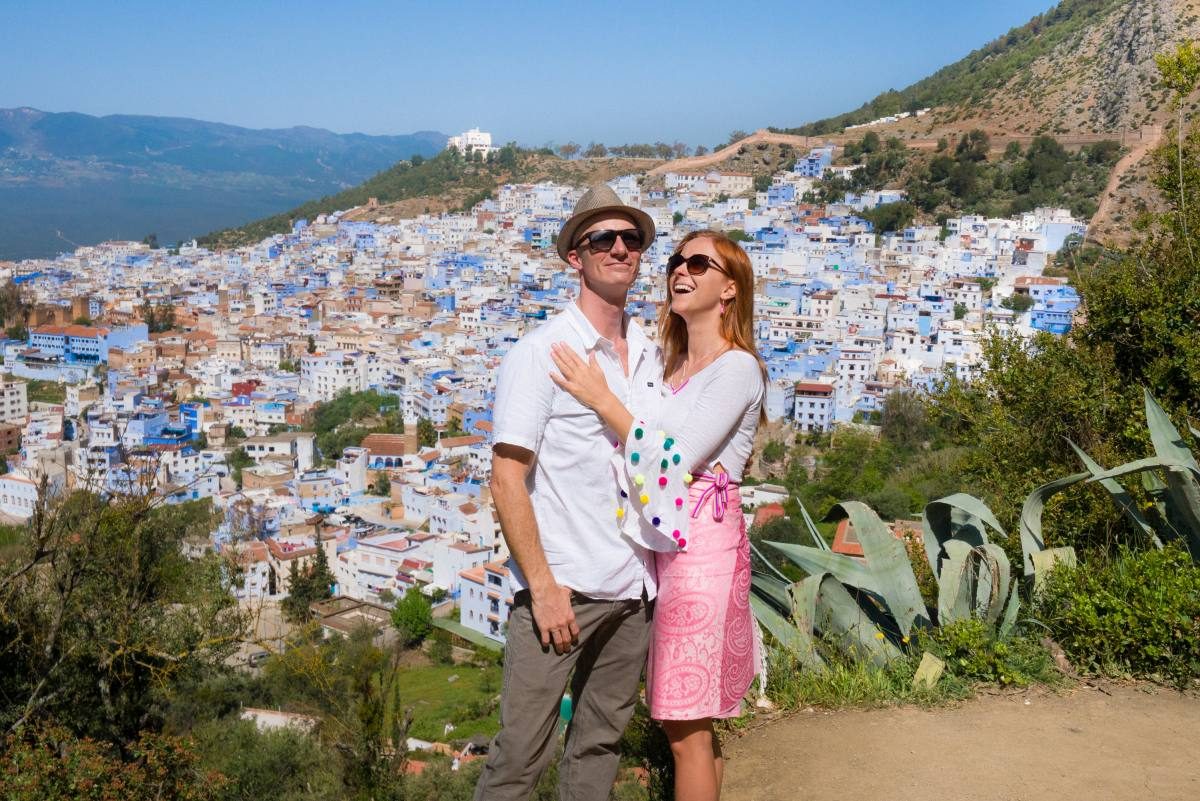 If you’re taking pictures with your smartphone, I recommend this wireless remote because you can actually go quite far away from the camera. I tried the most popular one on Amazon (this one) and it doesn’t properly work unless you care only about your head in the shot.

Alternatively, install an app called PlayMemories on your phone that connects via Bluetooth. Here are some other examples of my remote shutter photos: 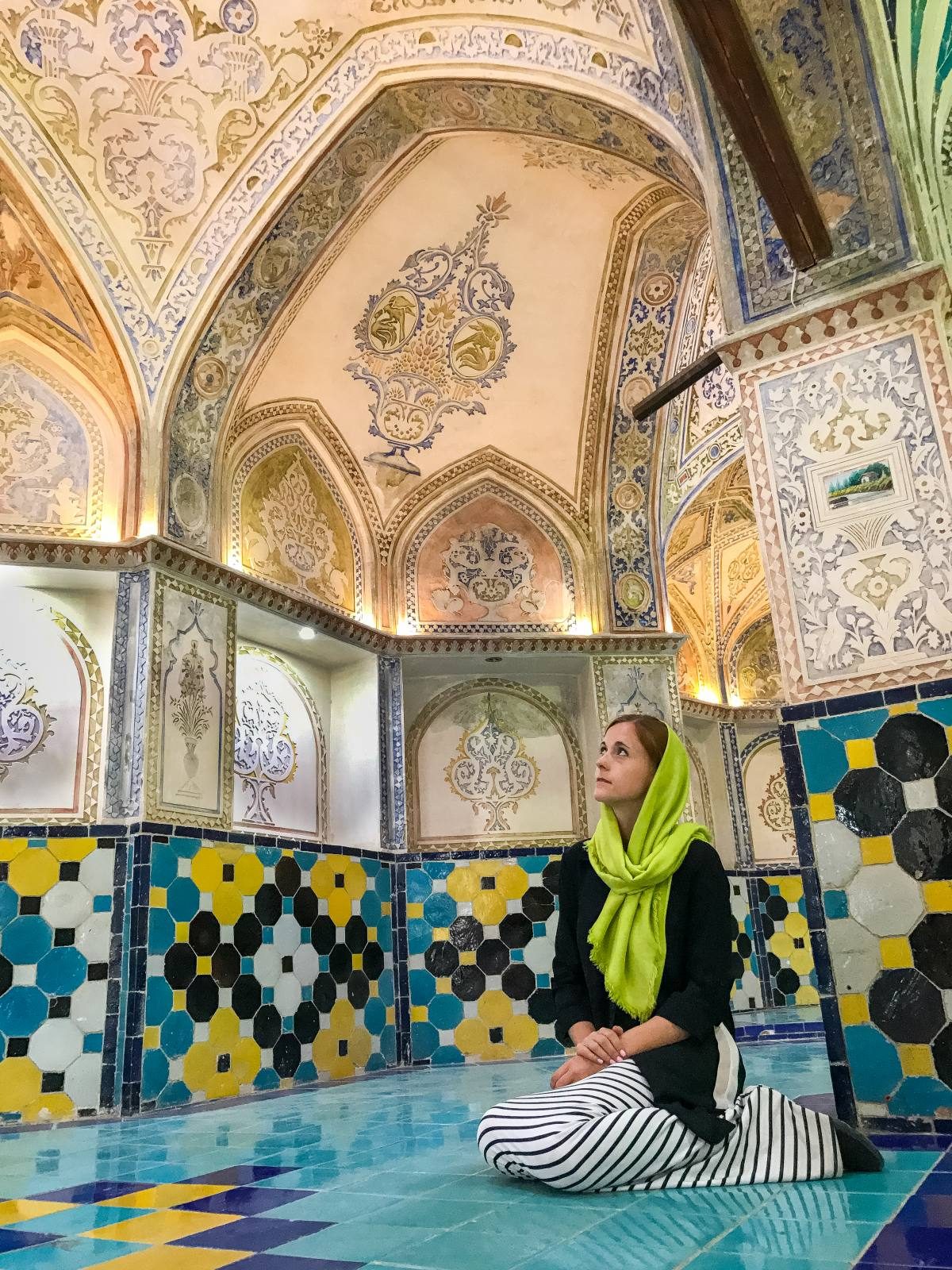 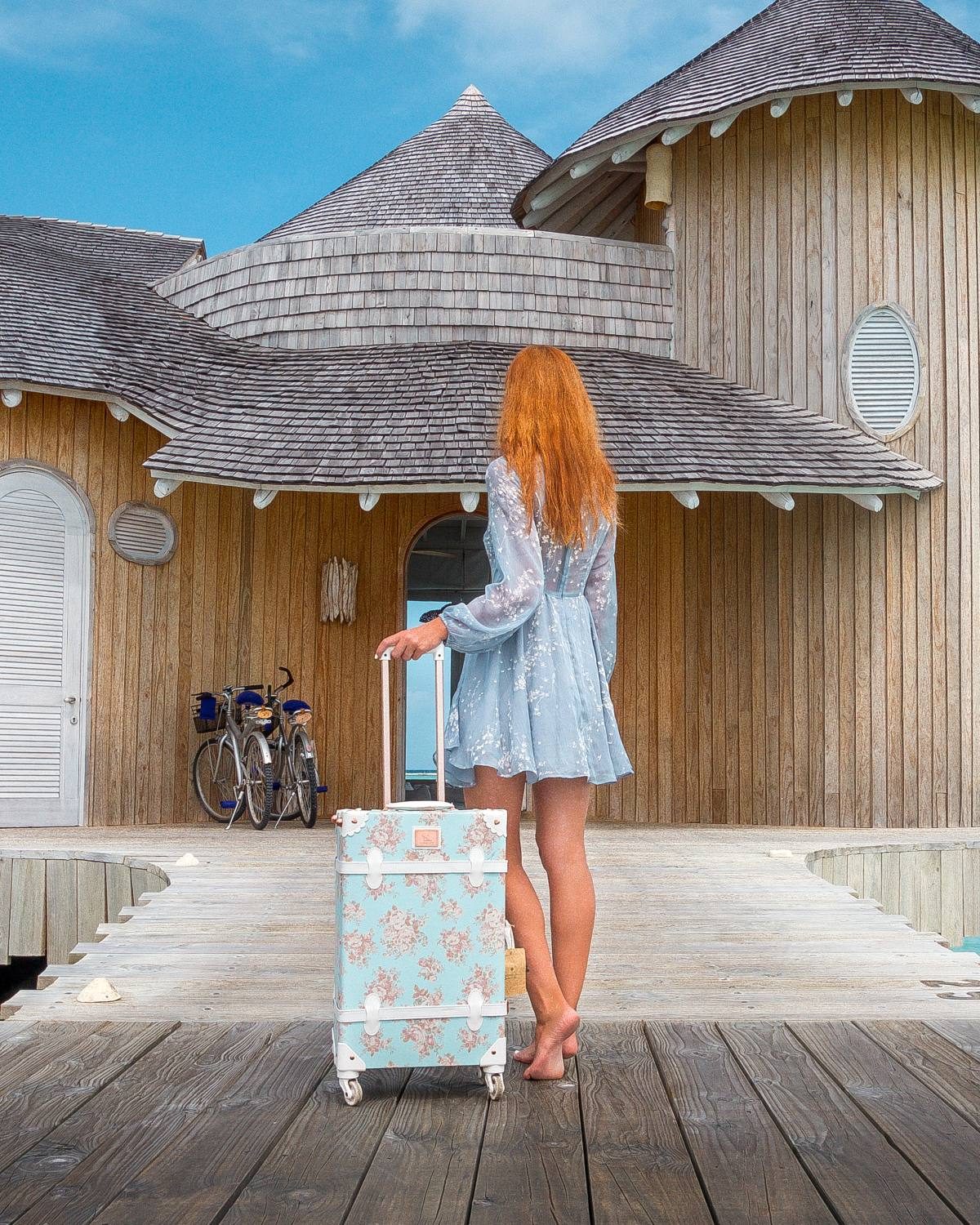 Use GoPro with Accessories

As a new owner of GoPro Hero 6, I love trying all the accessories. While I’m not a big fan of selfie sticks, they can be very useful when it comes to taking shots of yourself. The trick is to hide the stick somehow, so don’t make a mistake I did in this shot below 😉 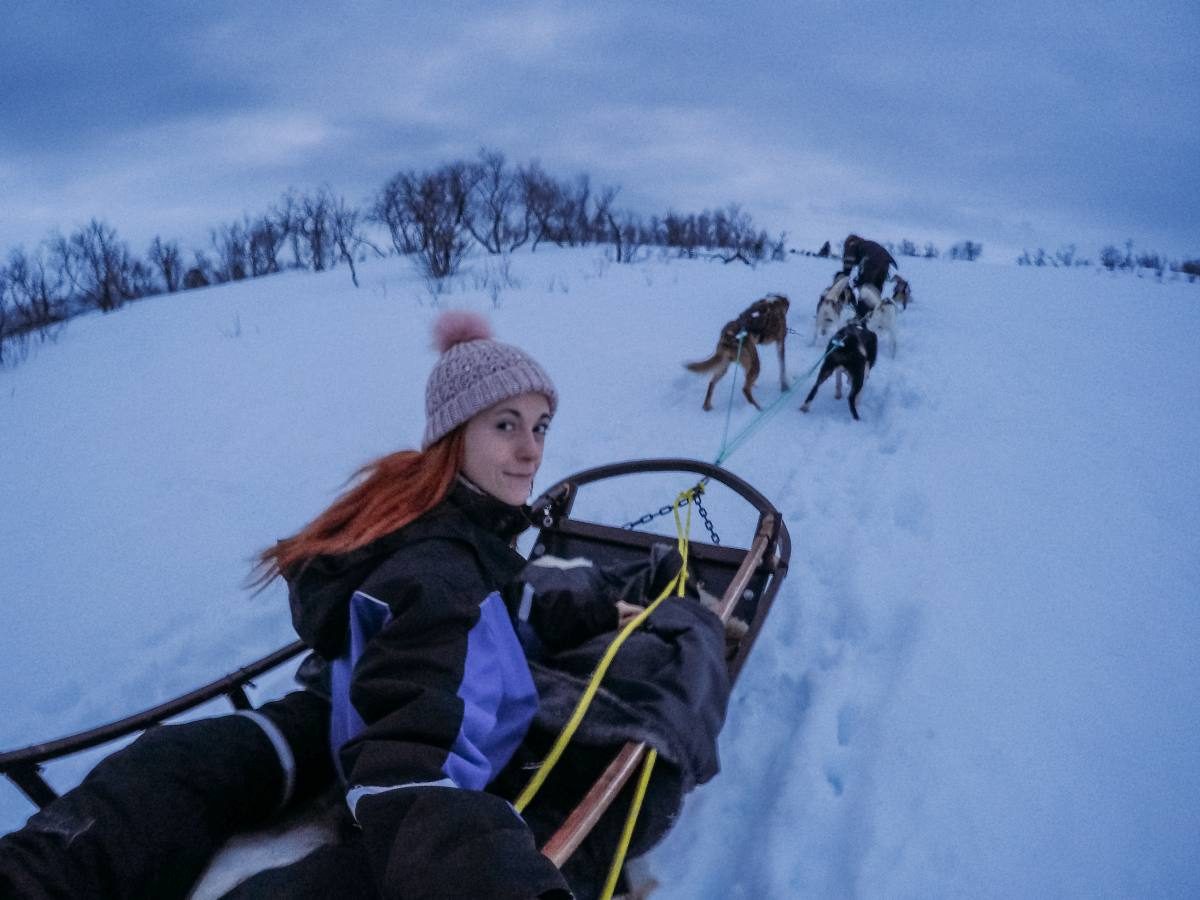 For extreme activities, I use my GoPro wrist strap that became very handy when I went sledding in Tromso. You can also use a GoPro flex clamp mount which allows you to have two hands visible in the shot. I personally love this one! 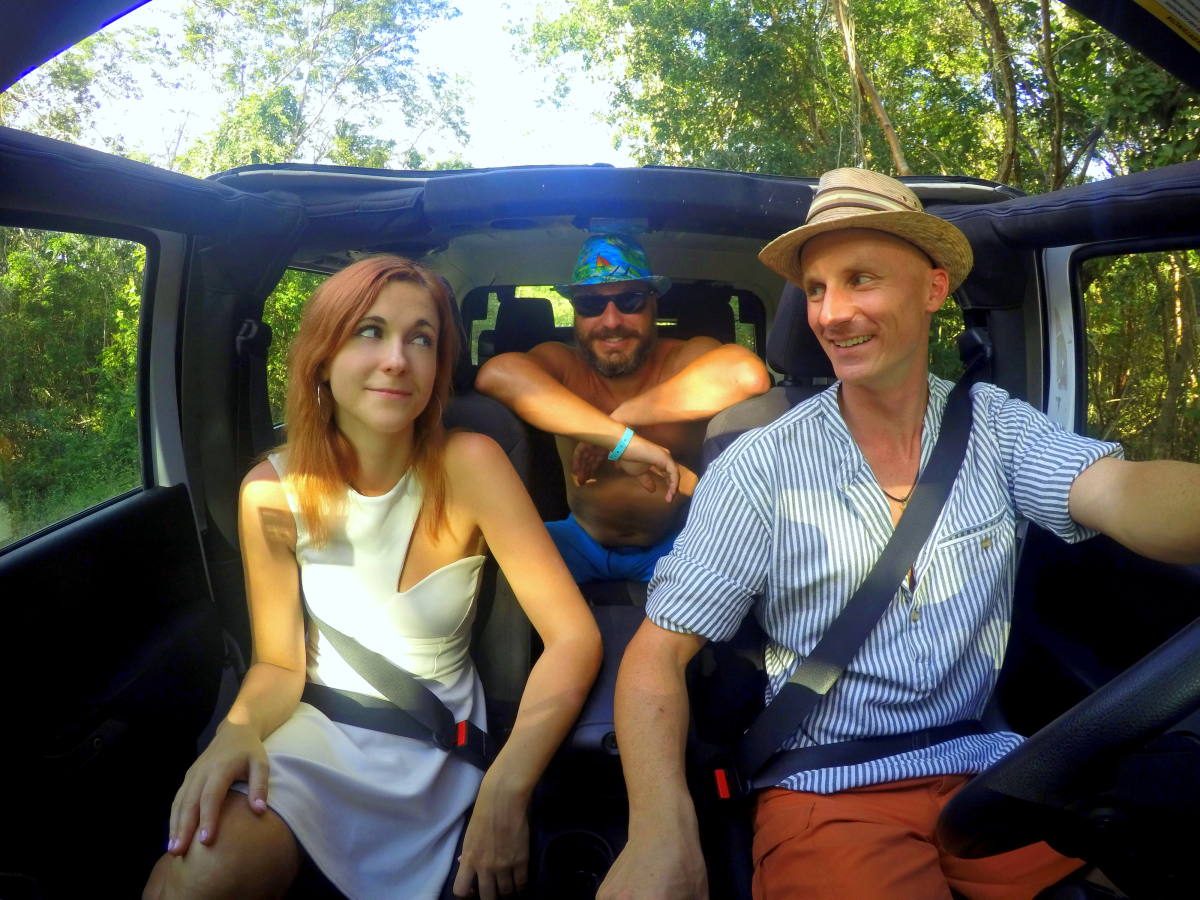 Use Wide-Angle Lens for Close-Up Shots

If you simply refuse to be that selfie stick person (like myself), you can get yourself a wide-angle lens. This way you will be able to balance a camera on a flat surface nearby, strike a pose and snap a selfie. This technique works perfectly if you need a close-up shot like this one with a Moomin. 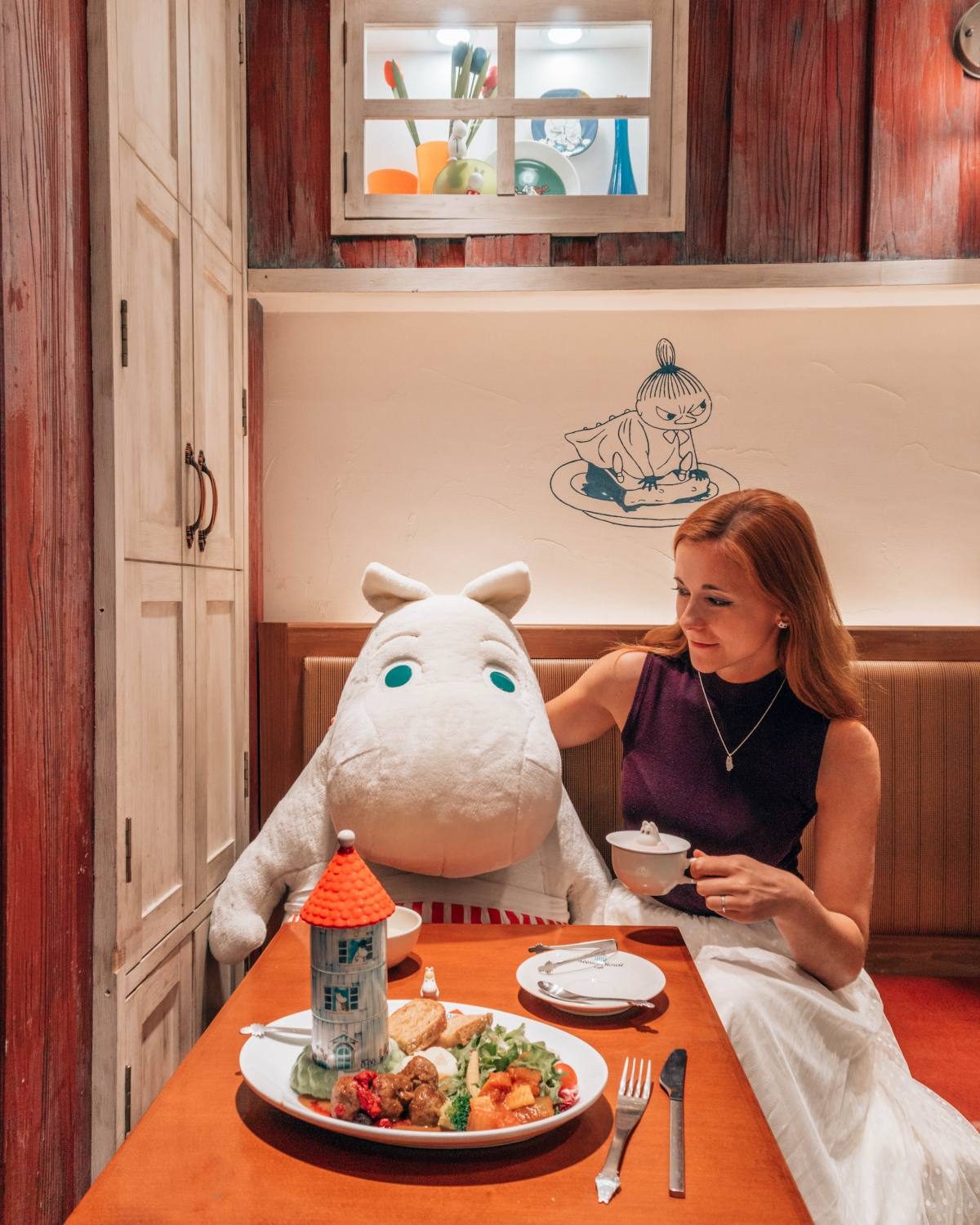 If you want to have lunch with a Moomin, check it out in Tokyo!

Put Random Parts of Your Body in a Shot

Your full body doesn’t always have to be in the shot, but if you still want to make a photo more ‘yours’ why don’t you put a hand in the shot? You might laugh at my advice, but take a look at this food photo and tell me if it doesn’t look awesome!

The newest took to get awesome photos of yourself is a drone. I currently own the smallest one on the market – DJI Spark, and it’s doing a pretty good job. Drone laws are quite strict, so it’s not always the best option, but keep it in mind. 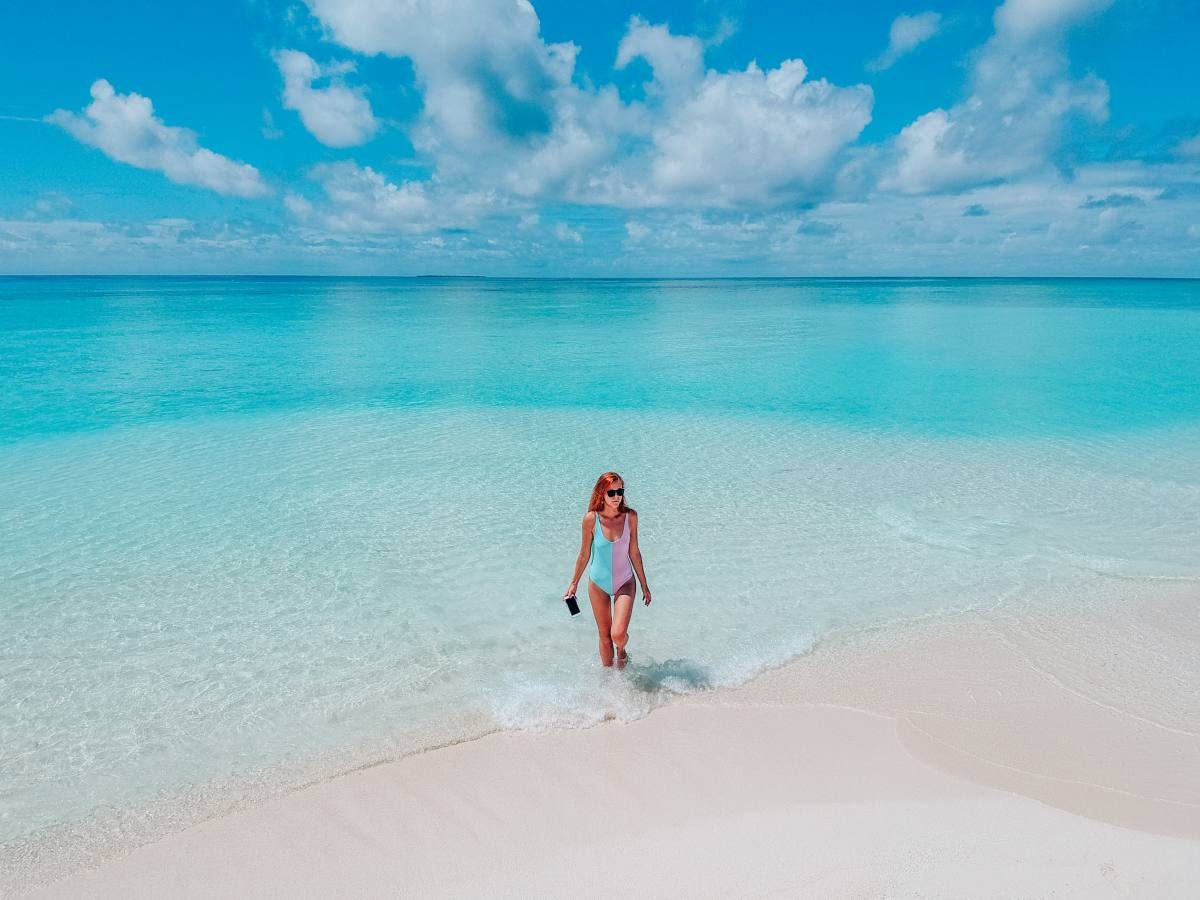 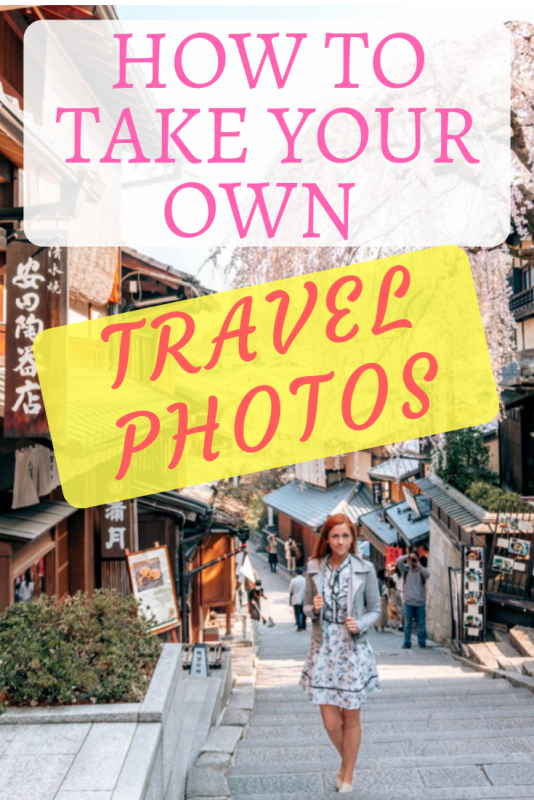 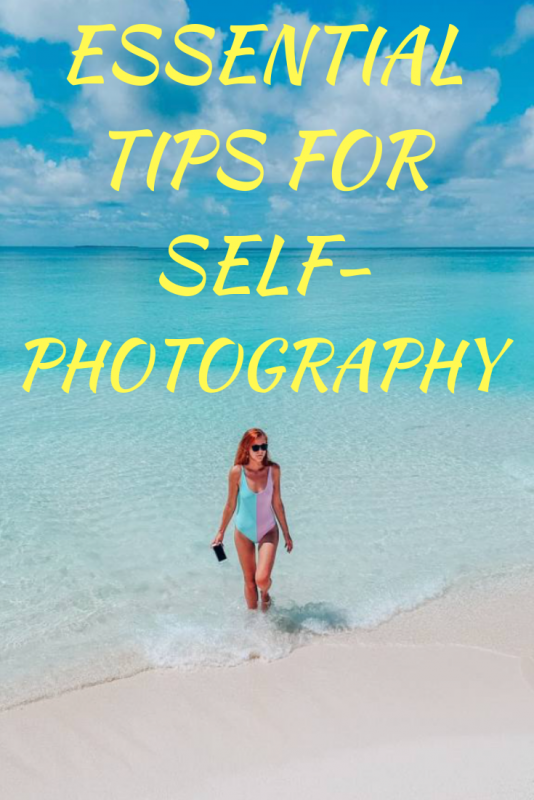 As you can see it’s possible to have nice photos of yourself for Instagram even if you’re traveling solo. Do you use any of my techniques? Share them below!

Traveling alone is brave. I have never dared to go to such a strange place alone. Too much risk. But your photos are great, I admire you so much. What app do you usually use to edit these photos, I often use vsco, which can be found on apkdown, to edit my photos. I find your photo color very beautiful, share the secret with me

I came across your page as I will be travelling solo and was wanting some advice. I have the iPhone 13 pro, so I am not sure if investing in a new camera would suit me as I am not someone that is into photography however I want good quality shots.

Would you say for city environments having a tripod that you can place down on the ground a good idea? I have a remote I bought a while back. And what sort of tripod?

Also I have considered drones, however they would need to be for more isolated setting. I don’t think I can use it in a town square for example. Is there a particular “selfie drone” you recommend. I don’t need it to go to great distances, however more for the angle.

Too true though, asking strangers for photos almost always produce the worst angles and unflattering shots. lol Looking at your photos makes me want to pack up my suitcase and travel again. I'll definitely look up tripod options to take for our next trip.

Do you have any recommendations for mobile mini tripods (iPhone) or lenses?

Yes! Mini Joby or Agfa Flexible. I returned every single iPhone lens I've ever tried - they're just not worth it especially if you have iPhone 11 Pro.

Thanks so much for your article! I am about to embark on my first solo trip and have exhausted myself with research about which tripod to buy and which camera to buy. Do you think it's necessary to have both an actual camera (I'm thinking Sony a6000) and a GoPro for underwater shots, or can the GoPro do it all? Additionally, I'm wondering if there are any affordable (under $50) tripods out there that can be mounted to both your phone or an actual camera (Sony a6000) or whether you would have to choose? I'm a beginner in photography so would primarily be using Auto mode. I don't want to regret not having an actual camera, but I've also been told by many that my iPhone 11 camera will serve me just fine. What do you primarily use your tripod with? Do tripods typically come with the necessary and appropriate camera/iPhone mounts or do you have to buy those separately as well? Thanks so much for your help in advance! I'm just really lost, and could use your advice.

Photos are just half of the success, editing is 50% of the final effect, to be honest. In terms of tripod heads, it depends on a tripod. iPhone 11 takes pretty good photos, but switch to shooting in RAW. The problem is iPhone photos is that they look great on a phone but the moment you put them on a bigger screen it's all pixelized because the resolution is low. I use my tripod for video, photos of myself, night shots, long exposure shots.