Lions in Zimbabwe: Politics and Volunteering

In April 2010 I took part in my first volunteering project at Antelope Park, based in Gweru in Zimbabwe. When I announced my decision to friends and family their emotions were mixed. I heard why am I going to the middle of Africa and if I lost my mind to handle the lions… YES, you read well.

And before you assume anything – read the full article. The issue of lions, politics, and volunteering in Africa and is way more complex than just a simple good or bad statement.

Lions in Zimbabwe: Politics and Volunteering

After a lot of cases describing animal abuse in Asia and recently, unfortunately, in my beloved South Africa, people have the impression that EVERY animal activity is bad, which isn’t always the case.

Some places in South Africa started using lions, the same way elephants are being used for rides in Asia. It comes as no surprise that every animal contact and especially lion walks are considered bad.

Why Aren’t All Lions Being Released Into the Wild?

Unfortunately, not all lions can be released into the wild. There are various reasons for that. They could have come from a place where they got abused and never learned how to hunt. A release would ultimately mean a death sentence for them.

But that’s not all. In the last few years research has shown that most of the lions left in the wild are infected with potentially fatal diseases. Not to mention hunters paying bribes to shoot lions, even in national parks.

Therefore, similar to the case of white rhino that requires 24/7 guarding against hunters, lions need to be protected too. It’s sad, but it’s true.

“ALERT has no intention of releasing captive-bred, human imprinted lions into the wild.  Rather, captive-bred lions undertake pre-release training on lion walks that tourists may choose to join, to enable their release into fenced natural areas.  In these release sites, the pride raises cubs free of human contact. It is these cubs that are intended for release into the wild.” Read more here.

My Experience at Antelope Park

When the plane started approaching Bulawayo airport I thought ‘Are we really going to land here?’ It was nothing there, just a grass field. Later on, I’ve realized that Bulawayo airport looks like an abandoned shed with two entrances with no doors, supposedly for departures and international arrivals.

The next morning I had to take a bus to Gweru by myself. Surprisingly, the bus was much more comfortable than American buses. Sam – the lion project manager picked me from the station with his truck explaining me everything about the handlers working in a park.

He told me about their funny names like Lovemore, Jealous, Bigboy. In Zimbabwe even ‘Iloveny’ is a name when the parents saw one of the famous American ‘I love NY’ T-shirt. 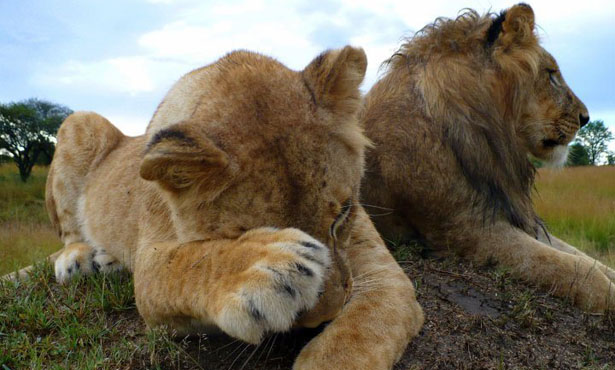 Antelope Park is specialized in breeding lions, that are slowly becoming extinct in Africa. Obviously, it’s main mission is to help lions survive, working directly with Lion Alert mentioned above.

However, the park earns money on its unique range of activities, such as lion walks, elephant swims, and African horse rides. Where does the money go? I won’t tell you it goes to the lions 100% as at the end of the day it’s a business, but a huge part of it does. This is when my role came along.

Note: Elephants are orphaned and that why they’re semi-wild (in an enclosed 3000-acre game park with the natural environment). They’re free, come and go as they please and NEVER carry a heavy seat to ride tourists, no weapons and hooks to harm their skin etc. They might, however, approach you and handle you a dry lion poop – I was told a sign of appreciation.

Unfortunately, not all places in Zimbabwe handle elephants that way. The main Zimbabwe Tourism Authority website shows an image of three elephants, heavily loaded with seats and three people on them. These animals don’t appear to be free. That’s not what’s happening at Antelope Park. 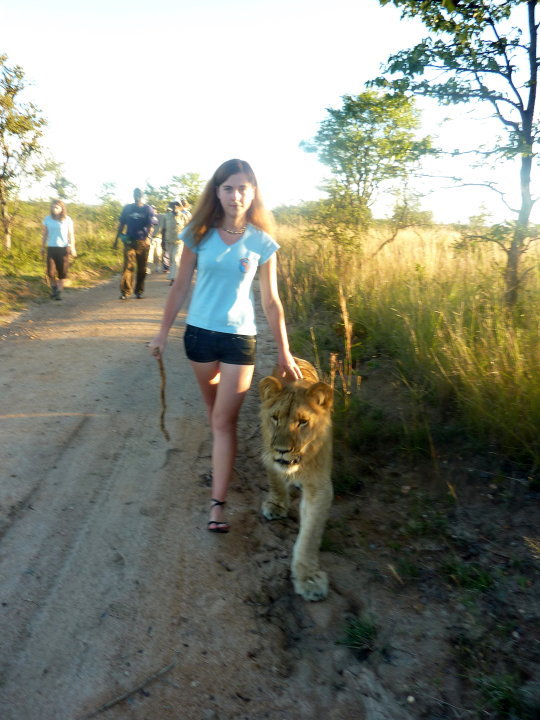 As a volunteer, I was involved in a bunch of activities. The main activity, however, was taking lions for a walk starting early in the morning: no collars, no leashes, no enclosures.

It’s an unforgettable feeling when the lions were coming to me behaving like kittens – touching with a head, walking around the legs without leashes and reacting when I called them by name!

There was no fear coming from volunteers because they were not going to bite, they were listening to people. Moreover, we were supposed to prepare meat for younger cubs and feed them with a baby bottle. These lions were not to release in the wild.

There were two abused lions brought to the park from another place and were afraid of everything. Whatever happened to them before, it definitely wasn’t right, as poor lions couldn’t even handle a zebra passing by in the distance.

Every day we were sitting in their enclosures trying to play with them with lion’s favorite toy – a dry elephant poo wrapped in leaves.

An interesting activity was also meat preparation… that was basically chopping the whole cow into pieces for those lions not to be released into free space and therefore non-hunters.

My Views on this Lion Project

Lions I’ve worked with weren’t abused or kept captive, it was not a ZOO. Nobody posed with lions for photos against their will (something I witnessed with tigers in Thailand). They’re also not trained or drugged to pretend that they like it. And while tourists could interact with the lions, it was their (lions) decision, not humans.

My trip was actually recommended to me by my university at the time. Back then everyone thought it was all good. However, the current state of Antelope Park is questionable.

Back in 2010 when I visited, things seemed fine in terms of handling the lion program. But 10 years later, there is much-confusing information online which caused an endless battle, and I’m not sure if I could make up my mind and say whether it’s legit or not anymore.

What I can see that Zimbabwean Tourism does support some bad activities, while Zambian Tourism Board suspended all encounters after being bombarded with social media attack.

What I can say though, is that if you want to donate money to a good cause support GG Conservation. I know trusted people there and I can vouch for it being legit. 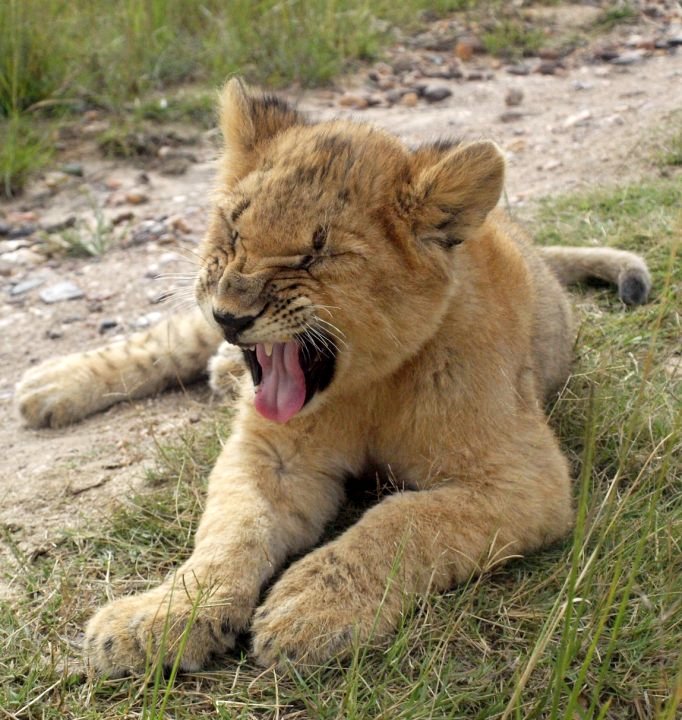 My Thoughts on Zimbabwe After the Trip

Every Sunday all volunteers were going to visit a local town of Gweru to meet locals. We had some mattresses on the truck, but it didn’t help to jump on it on every whole of the Zimbabwean road.

However, it seemed like we became the biggest attraction for the people in Gweru – a group of white people on a meat truck driving through town. Truth to be told, we looked ridiculous.

But that’s not what I wanted to talk about. Zimbabwe is an amazing country, with even greater people. Unfortunately, the political situation in the country isn’t good.

“The government of President Robert Mugabe continues to violate human rights without regard to protections in the country’s 2013 constitution. It has intensified repression against thousands of people who peacefully protest human rights violations and the deteriorating economic situation. Police use excessive force to crush dissent and violate the basic rights of civil society activists, human rights defenders, journalists, and government opponents. Widespread impunity for abuses by the police and state security agents remains. President Mugabe has undermined the independence of the judiciary and of the Zimbabwe Human Rights Commission (ZHRC) through verbal assaults on the two institutions.” —Human Rights Watch

But that’s just the tip of the iceberg, at least in my opinion. I might be totally biased, but that’s not Zimbabwe’s only problem. After endless conversations with locals, I realized that the government is one thing, but the presence of British-Zimbabweans is another issues.

One would say that these people, some born and raised in Zimbabwe, are locals too. And they are, but their lives are way different than an average black citizen of Zimbabwe.

White people keep using black people to work for them, underpaying them a lot. Some people were paid as little $2 per week to work in terrible conditions, in order to serve white people.

They can’t protest, they can’t complain as they have families to raise. But this treatment surely isn’t ‘fair’ to them.

I was invited to the house of a woman who worked at the park. When we got there it turned out it’s not actually a house, but two sheds for over 20 people to live in. Compare it to giant villas with even bigger swimming pools where white immigrants in Zimbabwe live (yes, I visited these houses too).

However, for a very long time, I haven’t seen people that happy as those two families living there. With a smile on their faces, they served each of us a slice of bread with jam while cooking sadza – traditional Zimbabwean meal, and scud – the local beer.

To me back then it was surely eye-opening, coming from the world of my university “friends” who due to the elite status of the school were very privileged. They complained when the meal wasn’t spiced enough, but these people were happy to even put scraps on their plates.

After the meal, some women started playing some music on hand-made instruments. We were all taken to dance and sing with them for the rest of the afternoon. Those people seemed to be the happiest family on the planet earth. 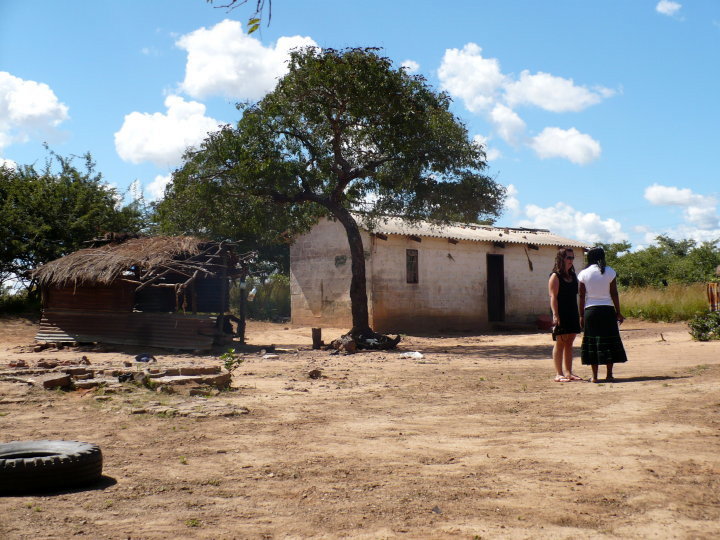 Would I go back to Zimbabwe? Yes, definitely, but probably not on an organized trip.

I’m aware that if a Western company arranges a safari to Victoria Falls or any other place of interest in the country, local workers will not be paid much for that. The government will get some part of the money and the rich British will take the rest.

Is Zimbabwe alone in this? Nope. I experienced a similar issue in Sapa region of Vietnam (when people of Hanoi were using them) and the most obvious example: Cuba.

What are your thoughts on Zimbabwe and lion controversy?

19 thoughts on “Lions in Zimbabwe: Politics and Volunteering”